Cone speaks up on Slaughter: 'He got beat up on the internet a lot'

The year the world woke up to the climate emergency

Although scientists have warned for decades about the risk to humanity and Earth posed by unfettered burning of fossil fuels, in 2019 their message seems to have finally hit home 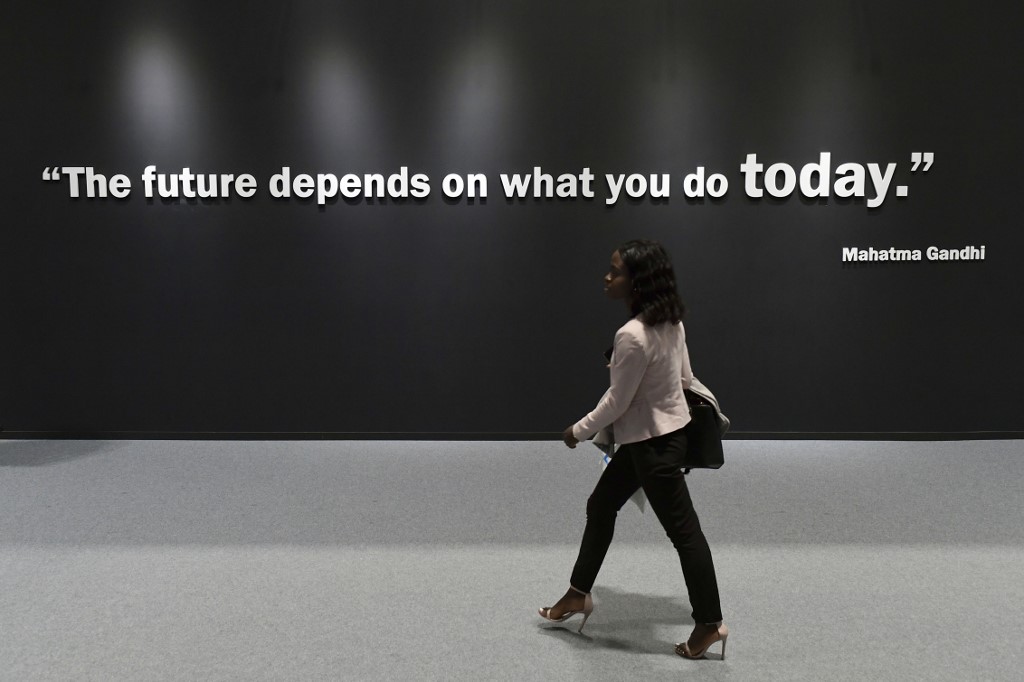 SAVE EARTH. A participant walks past a wall showing a quote by Indian pacifist Mahatma Gandhi at the UN Climate Change Conference COP25 at the 'IFEMA - Feria de Madrid' exhibition centre, in Madrid, on December 13, 2019. Photo by Cristina Quicler/AFP

PARIS, France – Schoolchildren skipping class to strike, protests bringing city centers to a standstill: armed with dire warnings from scientists, people around the world dragged the climate emergency into the mainstream in 2019.

Spurred on by Swedish wunderkind Greta Thunberg – virtually unknown outside of her homeland a year ago but now a global star nominated for a Nobel prize – millions of young people took part in weekly demonstrations demanding climate action.

And, like harbingers of the apocalypse, the Extinction Rebellion movement embarked on a campaign of peaceful civil disobedience that spread worldwide, armed with little more than superglue and the nihilistic motto: "When hope dies, action begins."

Although scientists have warned for decades about the risk to humanity and Earth posed by unfettered burning of fossil fuels, in 2019 – set to be the second hottest year in history – their message seems to have finally hit home.

The 2015 Paris agreement saw nations commit to limiting global warming to two degrees Celsius (2.7 Fahrenheit) above pre-industrial levels as a way of curbing the worst impacts of global warming.

A safer cap of 1.5C was included as a goal for nations to work towards.

Its landmark report in October 2018 laid the groundwork for the string of climate shockwaves that rumbled throughout 2019: The world is way off course for 1.5C, and the difference between 1.5C and 2C could be catastrophic.

"The message from scientists was that each half-degree counts," said Amy Dahan, a science historian specialising in climate at France's National Centre for Scientific Research.

It was a message heard around the world.

For Corinne Le Quere, president of France's High Commission for Climate Change and member of Britain's Committee on Climate Change, 2019 was "something new".

"I've worked on climate change for 30 years and for 29 of those, as scientists, we've worked unnoticed," she told AFP.

"It's given us a clear timeline: we have 12 years to act," said Caroline Merner, 24, a Canadian member of the Youth4Climate movement.

The UN last month said carbon emissions must decline 7.6% annually by 2030 to stand any chance of hitting 1.5C.

Scientists meanwhile said emissions this year will instead rise 0.6%.

Despite growing mobilization and awareness, COP25 – the climate summit in Madrid this month – barely squeezed out compromises from countries over a global warming battle plan that fell well short of what science says is needed to tackle the climate crisis.

But while society and particularly younger generations appear to have woken up to the threat of climate catastrophe, industry shows little signs of sharing their urgency.

Cyclone Idai in Mozambique, typhoon Hagibis in Japan, a deadly, record-breaking heatwave across much of Europe, wildfires in California and eastern Australia, floods in Venice... the list goes on.

The threat posed by climate change became so stark in 2019 that Indonesia, one of the fastest-growing economies on Earth, decided to move its capital to somewhere that wasn't sinking.

"We're seeing climate change with our own eyes," Le Quere said. "Reality is forcing us to act."

The science came thick and fast this year, with the IPCC releasing two additional special reports on land use and oceans, and another UN body, IPBES, issuing a stunning warning of the threats posed by human activity to the natural world.

Faced with an unbreachable body of evidence and mounting pressure from the streets, governments in 2019 started, slowly, to mobilize.

A total of 66 nations now have plans to be carbon-neutral by 2050. The cities of London and Paris declared official ecological and climate emergencies.

Yet there are fears meager progress could be undermined as developing economies appear no closer to ditching fossil fuels and the United States – the largest historic emitter – looks poised to complete its Paris pullout.

Environmental activism, of course, is nothing new.

As Alfredo Jornet, professor at the University of Oslo, pointed out, indigenous peoples "have been very active for a long time" in protesting against climate change and deforestation, often to little fanfare.

"It's easy to be worried about the climate when you have money and privilege," said Melina Sakiyama, 34, a Brazilian activist.

With the deadline for countries' Paris commitments looming, as well as a series of high-profile environment summits in 2020, this year is unlikely to be a one-off in terms of climate action.

"The question is how to mobilize this unrest in a way that can lead us to better, more peaceful, democratic and sustainable societies," said Jornet.

"In a sense, climate change makes us all more equal. It makes us more capable of acting together." – Rappler.com