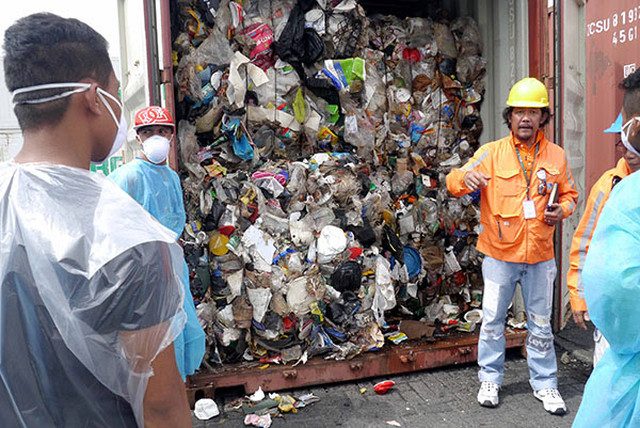 MANILA, Philippines – If the Philippine and Canadian governments won’t do anything about the illegal Canada waste being dumped into Philippine landfills, perhaps an international body will.

This is the hope of Philippine environmental group BAN Toxics who has formally asked the international Basel Convention to intervene.

The international Basel Action Network and BAN Toxics have submitted a formal letter to the Secretariat of the Basel Convention to begin proceedings on Canada’s refusal to fulfil its obligations to the Convention. Canada is a signatory to the international agreement and is thus bound to its rules.

“BAN and Ban Toxics, in their letter to Basel Convention Executive Secretary Dr. Rolph Payet, assert that as household wastes are a Basel Convention Annex II waste, Canada is bound to strictly control their export,” reads a press release sent on July 28.

Asking the Basel Convention Secretariat to intervene has been the suggestion of many lawmakers, including former International Criminal Court judge senator Miriam Defensor Santiago.

Two years after the first 50 container vans of Canada garbage arrived in the Manila port, the Philippine government has agreed with Canada’s terms to dump the waste in local sanitary landfills.

Forty-eight more container vans were found in the Manila port last May bringing the total number of vans to 98.

Environmentalists decided to take matters into their own hands after being disappointed by government action.

“We know that the Philippine government has been pressured by Canada not to put up a fuss. So our government is not going to file a non-compliance brief,” said Ban Toxics Executive Director Richard Gutierrez.

In their letter, the groups ask the Secretariat to bring the case to a special committee within the Convention that handles cases of non-compliance. Under the treaty, only the governments of the countries involved and the Secretariat can bring cases to the committee.

In the Convention text, the Secretariat is mandated to “assist Parties upon request in their identification of cases of illegal traffic and to circulate immediately to the Parties concerned any information it has received regarding illegal traffic.”

“Cases like this require the Secretariat to act,” said Gutierrez. “If this gross non-compliance is simply swept under the carpet, the Basel Convention and indeed all international law becomes but a sad joke.”

The issue has sparked outrage among other nationals, not least Canadian citizens themselves.

Jim Puckett, Executive Director of US-based Basel Action Network said, “Canada has admitted to us, that it has failed to properly implement the Basel Convention. This means that they are not in compliance and that has resulted in significant economic and potential environmental harm to the Philippines.”

Both the Department of Environment and Natural Resources (DENR) and Canadian embassy insist the garbage is neither toxic nor hazardous and thus not covered by the Convention.

When the Bureau of Customs inspected some of the container vans, they said they found mixed and unsorted plastic, household garbage, and used adult diapers.

The container vans had been misdeclared as containing recyclable plastic scrap materials, a crime under the Tariff and Customs Code of the Philippines and the Toxic Substance and Hazardous Wastes and Nuclear Wastes Control Act of 1990.

But even if the garbage is not hazardous, household waste still falls under Article 9 of the Convention which deals with illegal traffic.

“Any transboundary movement of hazardous waste or other wastes…with consent obtained from States concerend through falsification, misrepresentation or fraud…shall be deemed to be illegal traffic,” reads the treaty.

If the illegal traffic is due to the conduct of the exporter, in this case Chronic Incorporated and Live Green Enterprise, it is Canada’s responsibility to ensure the wastes are taken back by the two firms “or, if necessary, by itself into the State of export” unless “impracticable.”

Article 4 also states that the obligation to manage both hazardous and other wastes in an environmentally-sound manner “may not under any circumstances be transferred to the States of import or transit.”

The Philippine government has filed charges against the Philippine importer of the first 50 container vans. Canada has said it has “no domestic or international authority” to compel Chronic Inc and Live Green Enterprise to return the waste to Canada.

The contents of 26 container vans have already been dumped at the Metro Clark Waste Management Corporation in Capas, Tarlac as of July 22, according to the BOC.

Five are at the Manila International Container Port while 16 are at the SBMA Port of Subic.

The Tarlac provincial government ordered the dumping to be stopped pending a local inquiry and more thorough study of the garbage’s impact to health and environment.

Both houses of Congress have filed resolutions to investigate the issue.

Senator Santiago opposes the decision of the Philippine government to allow the dumping in its own soil saying it “sets a dangerous precedent for other countries to dump their waste in Philippine soil with impunity.” – Rappler.com