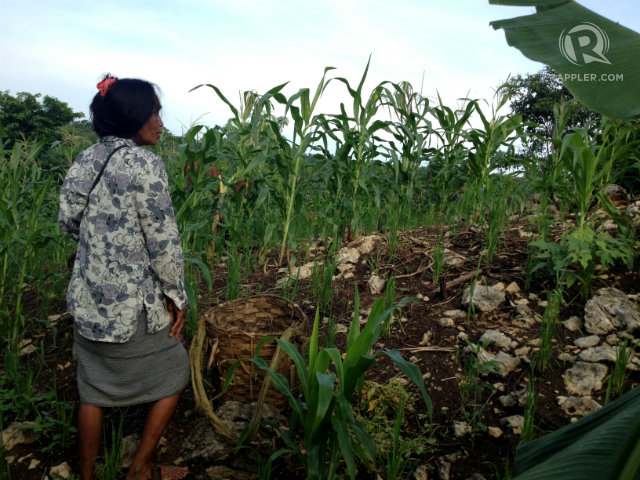 ORIENTAL MINDORO, Philippines – The bamboo floorboards rattled with the clucks and cries of baby geese underneath. The little creatures waddled towards the smoke trailing from Kudmay’s silver pot. She squats on the ground, waiting for rice to cook. It will be the breakfast of the Mayots, a family of 5. 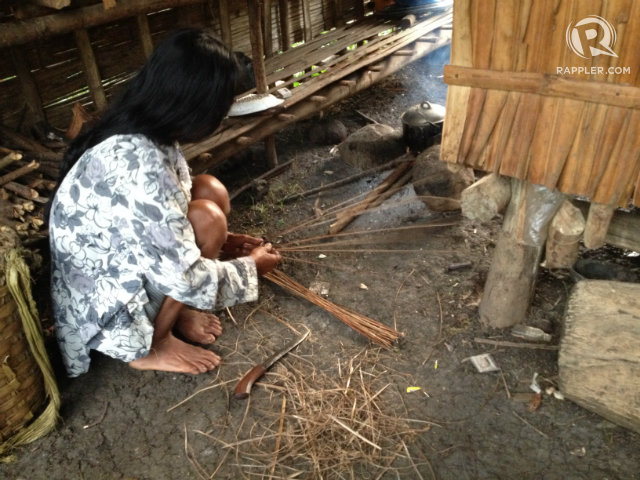 The air was chilly at 5am, but Kudmay sweated next to her little fire. Meanwhile, her husband Manalo went out to feed a carabao. He was hired to care for the animal until it gives birth. With the sun yet to rise, Manalo trudged along the dark towards his pregnant ward. His slippers dipped in thick mud, as Mindoro’s fresh breeze entered his lungs, gently like a snake.

The rice is ready, sometimes there’s also fish or bananas; other days, it’s just  coffee. Their tiny hut has no faucet, someone has to walk over to the community well.

If there are leftovers, the couple eats. The children always come first, Kudmay said.

Of the 3 kids, two go to school. Kathy, their 23-year-old, stays at home. She quit college just a semester away from graduating. These days, she helps her parents farm.

Kudmay’s 5 other children are already married and have families of their own, living only a few meters away. They all farm.

An hour or so later, wife and husband set out to work. Manalo brought his bolo, a small abaca bag, and his pair of rubber slippers. Over Kudmay’s head are straps attached to a big basket, she also has a bolo, but her feet were bare. 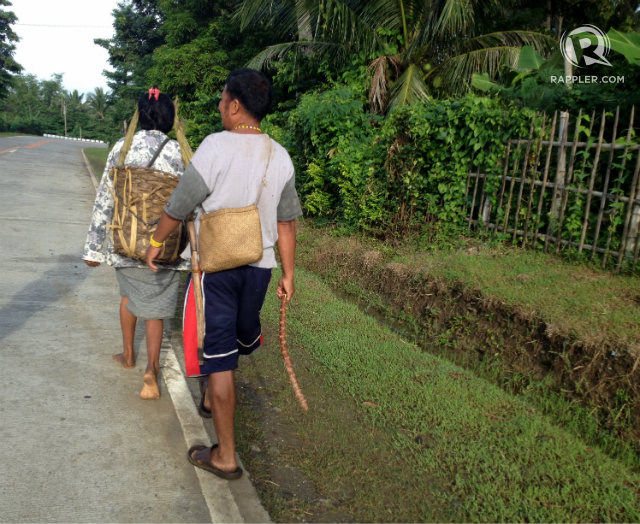 Sweat drooped over their foreheads, noses, and down their chins. They practice traditional kaingin, also known as “swidden farming,” but more commonly misunderstood as a mere destructive slash-and-burn technique. 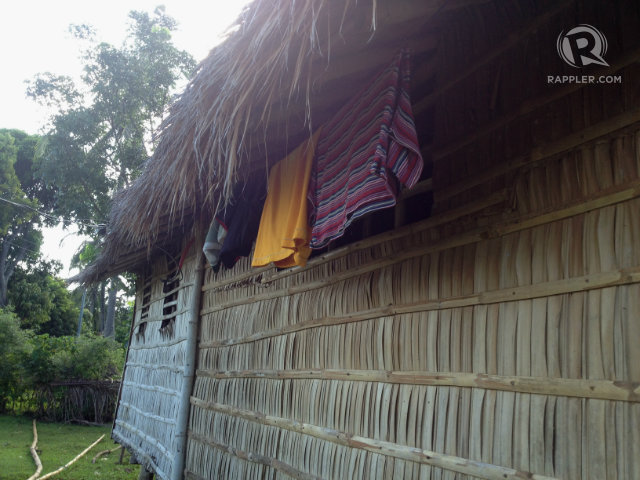 At around 11am, wife and husband returned home to eat leftover rice, topping it off with corn or sweet potato. But this time, there weren’t any harvests. Food has been tight, the weather unforgiving, and the crops quietly dying.

Manalo said it rained in the past weeks, saying it with a smile, thankful of the water rescuing his thirsty crops. These days, however, the sun was mad.

Bulalacao experiences heavy monsoon from July to September during the southwest monsoon, a 2013 study published by the University of the Philippines-Manila reported. “Rainfall occurs during the month of June to November with a recorded maximum rainfall of 395.5 mm and 450 mm respectively,” it added.

Manalo, however, observed that rain occurred less frequently even in August. But other times, typhoons would leave him with no plants.

“This past typhoon this year, we had no sales of bananas because there were no harvests. When there’s a typhoon, crops run out. During drought, crops don’t live,” Kudmay said in her local language.

The study said Bulalacao has a prolonged dry season because of “winds caused by northwest monsoon cut off by the mountain ranges between Bulalacao and Mansalay.” The dry season begins as early as December and ends late in June. 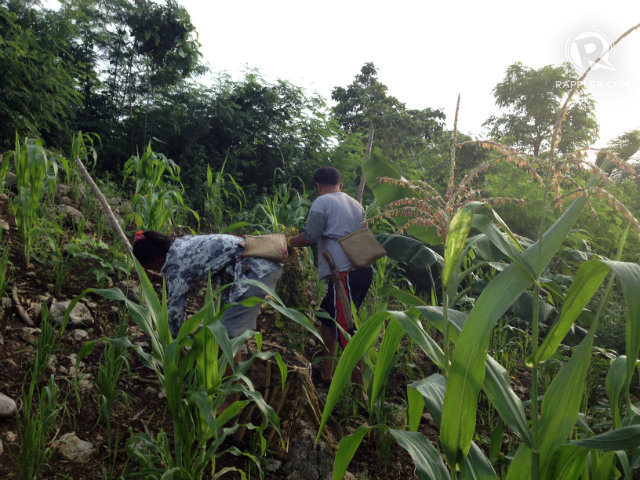 The couple returned to the field, working again from two to four. Upon arriving home, Manalo prepared small pieces of wood to be used for cooking dinner. Meanwhile, Kudmay attended to the children and household chores.

The Mayot family, part of the Hanunuo tribe of the Mangyans, lives in the uplands of Bulalacao, considered as the oldest settlement in the whole of Mindoro. It is the southernmost municipality of Oriental Mindoro, a province with a poverty incidence among families of 26.2% as of 2012, the National Statistical Coordination Board showed. This is higher than the national average of 22.3%.

Bulalacao sounds similar to the Filipino word bulalakaw, which means “shooting star.” But Bulalacao’s name originated from a mythical bird which was believed to haunt locals.

The day is nearly over for Kudmay and Manalo. After dinner, their daughter Kathy washed dirty dishes using soap, basins, and jugs of water. The couple, alongside their grandchild from next door, watched television. The signal was weak and the images were grainy, but the whole family laughed at the small TV.

Inside their hut, there was one bulb. Outside, there were plenty of stars, if not hundreds, lighting up the small village. Kudmay rolled out their banig, ready to sleep and to take on another day in 40 winks or less.

“Our ancestors lived along the coastlines, that’s our real ancestral land)” narrated Ben Bernabe in his local language. He is the chairman of PHADAG or the Pinagkausahan Hanunuo sa Dagag Ginuran, a people’s organization for Hanunuo Mangyans.

So how come the Hanunuo now live in the highlands?

Throughout the years, the group has been displaced by outsiders like the Malays. The Mangyans, however, remained friendly with the Malays, even establishing a trading deal with the Chinese.

The Spaniards came to Mindoro during the 15th century, spreading Christianity nationwide. “The natives did not submit passively to the conquistadors, but were eventually overwhelmed by the technological superiority of the invaders,” said the 2013 UP Manila study.

“Our ancestors were asked to leave, some got scared, until they ended up in the mountains,” Bernabe continued.

Up in the mountains, the trading with the Chinese stopped. “Spaniards and migrants from other parts of the country took over the lowlands,” the study said, adding that Mangyan exploitation continued under the American colonization.

Throughout the years, the Mangyan’s ownership over their lands were put at risk. Several Filipinos have also continued to misunderstand the Hanunuo and their kaingin practice. 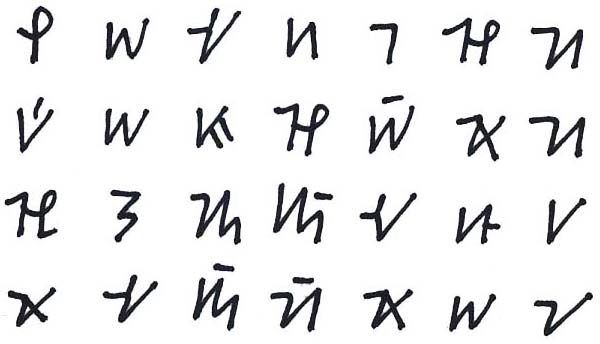 Would it be as beautiful
Our good and precious soil
if we did not work and toil?
Very soon it would be waste

What exactly is kaingin? Some Filipinos associate kaingin with fire and images of charred lands, blaming the Mangyans for destroying Mindoro’s forests.

“We cannot accept that we are told that we destroy nature. We know how to respect forests, how we live, and how we plant. They say Mangyans and Hanunuo have no education or agriculture, but that’s not true,” Bernabe argued.

Traditional shifting cultivation and fallow periods (resting of land) are sustainable, according to the NGO Non-Timber Forest Products Exchange Programme (NTFP-EP) Philippines. The practice also helps in maintaining and increasing biodiversity, it added.

“The forest is not only home to wildlife; it’s also haven for rich culture. History proves that indigenous communities are great in managing nature.” – NTFP-EP

“What we kaingin are not major forests because we consider those sacred, we respect that. We kaingin between our plants, hagonoyan (type of weed), not big trees,” Bernabe said.

There is a need to distinguish the different types of swidden systems, according to Dr Wolfram Dressler of the University of Melbourne. stressed the “Many non-indigenous farmers will only clear forest to plant permanent crops and keep the field cleared indefinitely and thereby not allow the forest to regrow,” he explained.

“This contrasts with swidden done by smaller-scale indigenous peoples whose fields tend to be smaller in size and only planted by non-permanent crops, and if with permanent crops, families will still allow the forests to regrow for usually more than four years, and sometimes longer in other areas,” Dressler continued.

IPs know what they are doing, the NTFP-EP argued. They know that the soil loses nutrients upon repeated use; they know that a short shifting cultivation and a longer resting period could help restore thick forests and fertile lands.

To help curb kaingin, the government said it implements the National Greening Program (NFP), a forest rehabilitation program which aims to plant 1.5 billion trees across 1.5 million hectares nationwide from 2011 to 2016.

But not everyone agrees.

IP rights lawyer Jing Corpus argued that reports from the ground reveal that some IP communities complain of the NFP being poorly implemented, mismanaged, and misfunded.

“As tribe leaders, we’re not anti-NGP. We just want it to be implemented properly,” PHADAG’s Aniw Lubag said in his local language. He claimed that not all seedlings are actually planted, or if they are, not all of them always survive.

Dressler stressed that compared to plantation economies, swidden farming is “far more resilient to climate change pressures than most if not all plantation systems. Most crops in swiddens are already adapted to dry upland conditions and so much less social and ecnomic risk attributed to them.”

“It’s simple a scandal and injustice that small upland farmers are still blamed in the way they are.” Instead of discriminating IP farmers, Dressler suggested peaceful talks and cooperation between the government and the IP community,” he continued.

The voices of the Hanunuo Mangyan are not as heard as those of Filipinos blaming IPs for deforestation. But no longer will they stay muted; alongside anthropologists, IP rights advocates, and non-governmental organizations, the Hanunuo are trying to turn the tide on how Filipinos view kaingin.– Rappler.com