Oct 1, 2015 6:24 PM PHT
Pia Ranada
Facebook Twitter Copy URL
Copied
In its submission to the United Nations, the Philippines says the carbon emission reductions by the year 2030 will be taken from the energy, transport, waste, forestry, and industry sectors. But this target is conditional on aid. 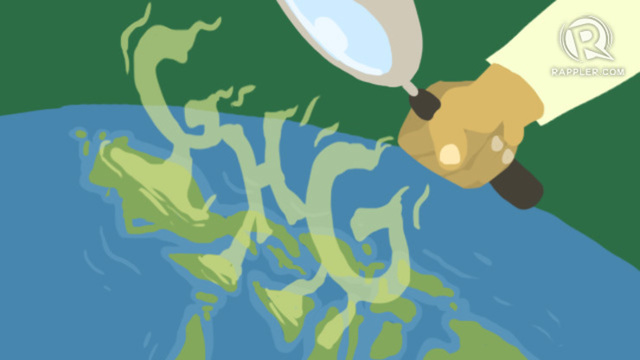 MANILA, Philippines (UPDATED) – The Philippines has submitted its Intended Nationally Determined Contribution (INDC) to the United Nations (UN), pledging to cut by 70% its carbon emissions by the year 2030.

But this emission reduction target is conditional on assistance from the international community.

The document, representing the country’s contribution to the global effort to combat and prepare for climate change, was submitted on Thursday, October 1, Manila time, said Climate Change Commissioner and Secretary Lucille Sering. This was the last day the UN set for INDC submissions.

Aside from reducing carbon emissions, the Philippines says it will also commit to adaptation measures to help prepare its citizens for impacts of climate change such as typhoons and drought.

But the INDC submission is only an “initial” one based on current available data from the sectors affected, reads the document.

“This INDC will be updated as more data becomes available,” it says.

According to the INDC, the Philippines “intends to undertake GHG (CO2e) emissions reduction of about 70% relative to its BAU (Business As Usual) scenario of 2000-2030.”

These carbon emission reductions will be taken from the energy, transport, waste, forestry, and industry sectors – the country’s major sources of carbon emissions. Notably, the agricultural sector was not included even if it is the second biggest source of emissions after the energy sector.

But the 70% reduction target is dependent on aid from the international community.

“The mitigation contribution is conditioned on the extent of financial resources, including technology development and transfer, and capacity building, that will be made available to the Philippines,” says the INDC.

The Climate Reality Project calls the 70% reduction target a “significant development” for the Philippines.

“Having less than 1% of the total global carbon emission, this is not only a gargantuan challenge for the government but for all sectors to cooperate and take action,” said the group’s country manager Rodne Galicha.

Adaptation is the “priority” of the Philippines when it comes to its climate action pledge, said Sering.

“Our INDC is based on our philosophy of undertaking mitigation as a function of adaptation, therefore, we will still prioritize adaptation measures,” she said.

For adaptation, the Philippine government said it considers as priority measures the strengthening of systems for climate monitoring and observation, the conduct of climate and disaster risk and vulnerability assessments, improving the resilience of ecosystems, and the climate-proofing of sectors such as agriculture, water, and health.

Like the mitigation contribution, the adaptation commitment is hinged on support from the international community.

The Philippines is among the country’s most vulnerable to climate change impacts, makings its INDC “greatly awaited” by the international community, said the CCC.

The final INDC differs from the draft presented to stakeholders in that gathering. The draft then shown committed emission reductions by 10% from energy and transport sectors, unconditional on outside aid.

With aid, there would be another 10% reduction, read the draft.

The CCC, the agency that spearheaded the formulation of the INDC, was previously criticized for lacking transparency in the INDC crafting process.

As of posting, 136 countries have submitted their INDC to the UN. These INDCs will be compiled by the UN into a synthesis of all climate pledges.

These climate pledges will be among the bases for the Paris Agreement on Climate Change. This global deal will be forged in Paris, France in December. – Rappler.com