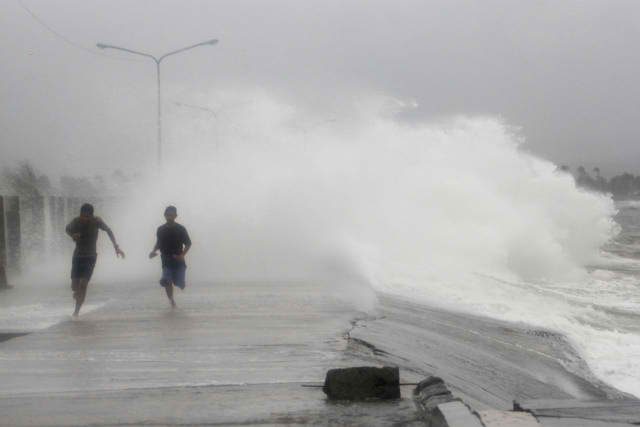 Facebook Twitter Copy URL
Copied
After 3 years since its creation, the PSF is now operational. Local governments and groups are asked to submit project proposals that can help their communities adapt to climate change.

MANILA, Philippines – After 3 years since it was created by law, the People’s Survival Fund (PSF) may now be accessed by local government units and community organizations needing financial support for climate change adaptation and disaster risk reduction.

A call for project proposals was officially made by the Climate Change Commission (CCC) on Wednesday, October 28 in Makati City.

“We are pleased to announce that the P1 billion climate fund is now ready. The Climate Change Commission is ready to accept project proposals. Climate change is happening now and it is sure to affect everyone especially our most vulnerable population and communities,” said CCC Assistant Secretary Joyceline Goco.

LGUs with the following characteristics will be prioritized:

Community-based organizations like farmer or fisherfolk cooperatives may also submit proposals if they are accredited by the DILG MC 2013-70 or DSWD-DBM-COA Joint Resolution 2014-01.

If they are not accredited under these policies, they may seek accreditation by the Climate Change Office, the agency serving as the secretariat of the PSF.

The PSF handbook with all the necessary application forms can be downloaded here:

Project proposals will be judged based on how well the design of the projects ensure the impact is felt by the vulnerable communities. LGUs that can prove they can effectively mobilize resources are more likely to receive funds. (READ: 6 ways climate change will affect PH cities)

The evaluation of proposals will be done by the PSF Board, composed of 9 members. Six of these are from government agencies: CCC, Department of Budget and Management, Department of Finance, Department of Interior and Local Government, National Economic Development Authority, and Philippine Commission on Women. Three of the members are from civil society, academe, and business sector.

Among the defining aspects of the PSF is that it is supposed to be easier and faster to access than other government fund sources.

According to the CCC, the entire process, from evaluation of project proposals until the actual disbursement of the first tranche of funds, should take at most 30 days.

There is also no limit to how much funds approved proposals may receive.

“This is what makes the PSF such a unique fund. It recognizes that only local governments and groups, not the national government, can identify their own needs and how much they need,” said PSF board member for civil society Red Constantino.

Why did it take so long?

The PSF was created by Republic Act No 1074 in 2012 but was made operational only 3 years after. (READ: LGUs frustrated over delayed use of People’s Survival Fund)

Goco explained that the PSF Board wanted to ensure the right mechanisms for evaluation, monitoring, and validation were in place before operationalizing the fund.

“Deliberations were done by the PSF Board. There were consultations on how to accredit the local communities. What are the instruments we can use for accreditation? We wanted to look at the current processes in place. We had to look as well at what are the practices ongoing so we can really develop rules and mechanisms that can facilitate the accessing of the fund,” she said.

Constantino gave assurances that there would be enough manpower to go on the ground to check if the projects are really implemented.

The funding release will be facilitated by the Municipal Development Fund Office (MDFO) under the DILG.

The MDFO was chosen by the PSF Board because of its experience, credibility, and institutional ties with the Commission on Audit and local governments. MDFO is present in all LGUs, putting them in a good position to check on the projects.

The various government offices involved in the fund will also augment the monitoring and validation efforts if there are not enough MDFO staff.

The PSF, being a public fund, will still be subject to COA auditing.

There are already 13 project proposals submitted to the PSF Board. Most of them are from LGUs in Mindanao. The proposed projects are mostly infrastructure for flood control, agriculture, and water management.

The worth of these projects have already exceeded P1 billion, said Goco, but they have not yet been approved.

The PSF Board also encourages “joint” proposals by provinces or towns facing the same climate impacts. (WATCH: Climate change, explained by a kid)

This is to prevent, for instance, 7 towns submitting separate proposals that all have to do with the same lake, mountain, or storm surge-prone shoreline. Joint proposals would maximize the use of the fund and address the transboundary nature of natural disasters and other climate threats.

Constantino said this is a chance for LGUs to step up:

“The PSF is open for business. It should challenge LGUs to start going beyond business as usual, to make sure better planning starts from here on.” – Rappler.com