PH drops in 2016 list of countries vulnerable to climate change 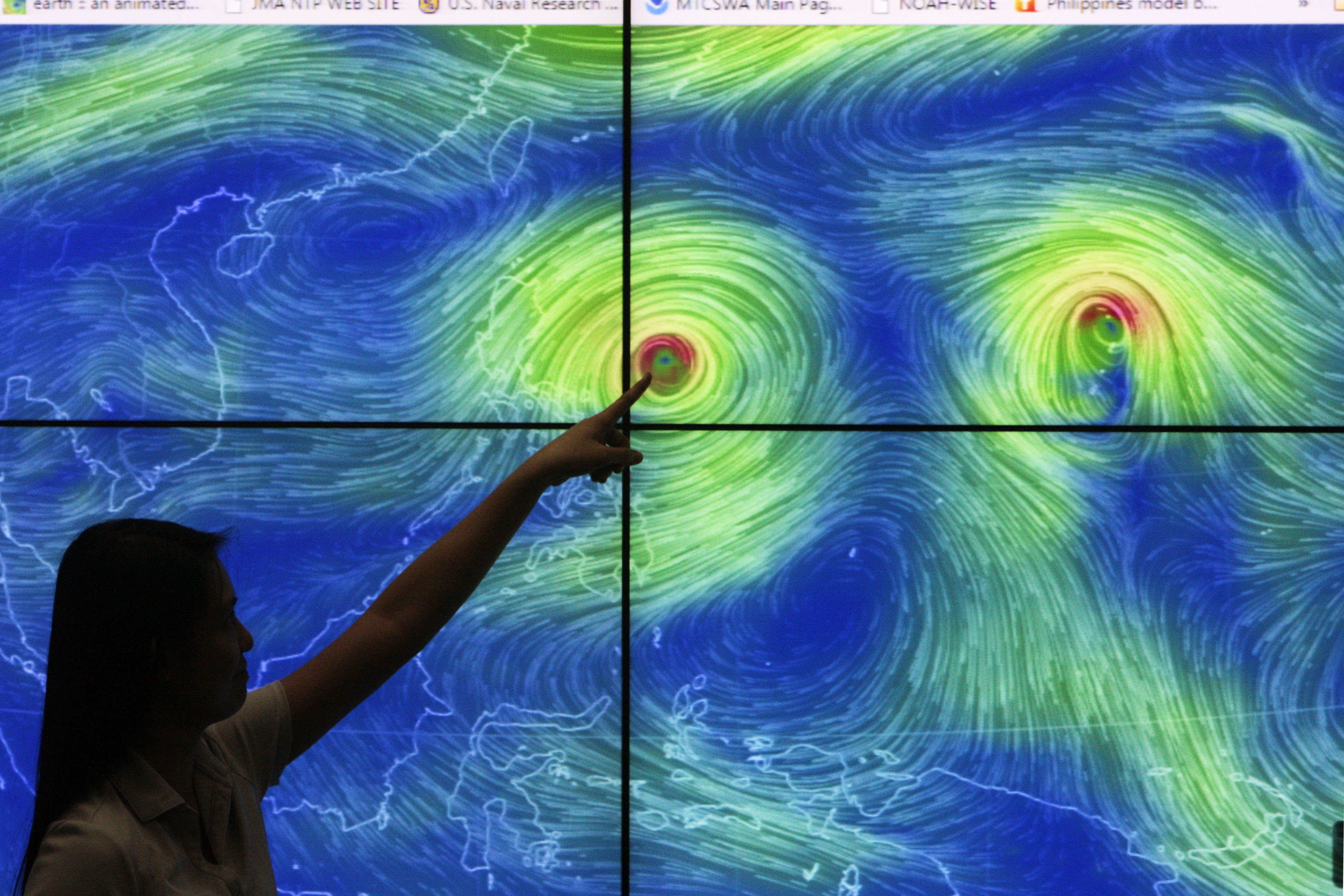 MANILA, Philippines – Though still tagged as “extremely” vulnerable to climate change, the Philippines has moved down the latest Climate Change Vulnerability Index, partly due to improved disaster risk management, better access to clean water, and reduced dependence on the agriculture sector.

In the 2016 Climate Change Vulnerability Index (CCVI) released by risk analysis company Verisk Maplecroft, the Philippines was ranked 13th most climate-vulnerable country, an improvement from the 2015 Index in which it was at 8th place. (READ: 6 ways climate change will affect PH cities)

In this latest Index, Chad in Central Africa was deemed the country most vulnerable to impacts of global warming. Second place went to South Asian country Bangladesh which had ranked first in the 2015 Index.

The 2016 CCVI, released last November 13, evaluates the vulnerability of 186 countries to extreme climate-related events and changes in climate parameters over the next 30 years. 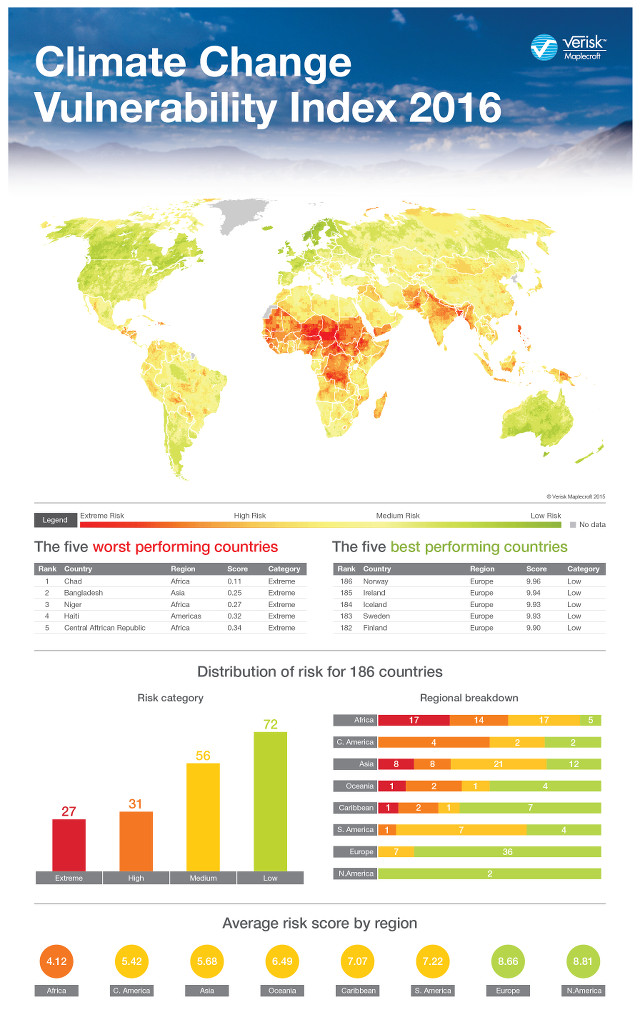 It also evaluates how likely these populations will experience changes in parameters like air temperature, precipitation, and humidity. The level of exposure is often determined by geographic location like proximity to storm-surge-prone shorelines or landslide-prone mountainsides.

Sensitivity measures how greatly the human population will be affected by an extreme climate-related event or changes in climate parameters.

This is determined by the community’s economic resources, accessibility of health services, access to knowledge, population pressure, infrastructure, natural resources and dependence on the agriculture sector.

Adaptative capacity captures the ability of a country’s institutions, economy, and society to adjust to, or even take advantage of, stresses due to climate change impacts.

Improvements in the Philippines

A range of factors can explain the Philippines’ improved performance on the list.

“We’ve seen improvements in recent years in the access to clean water and sanitation, and also a reduction in agricultural dependence,” Verisk Maplecroft communications head Jason McGeown told Rappler in an email.

These two factors lessen the sensitivity of Philippine communities to climate change impacts.

Better access to clean water helps guard communities against sickness brought about by climate impacts like drought, floods, or the proliferation of diseases like dengue and malaria. 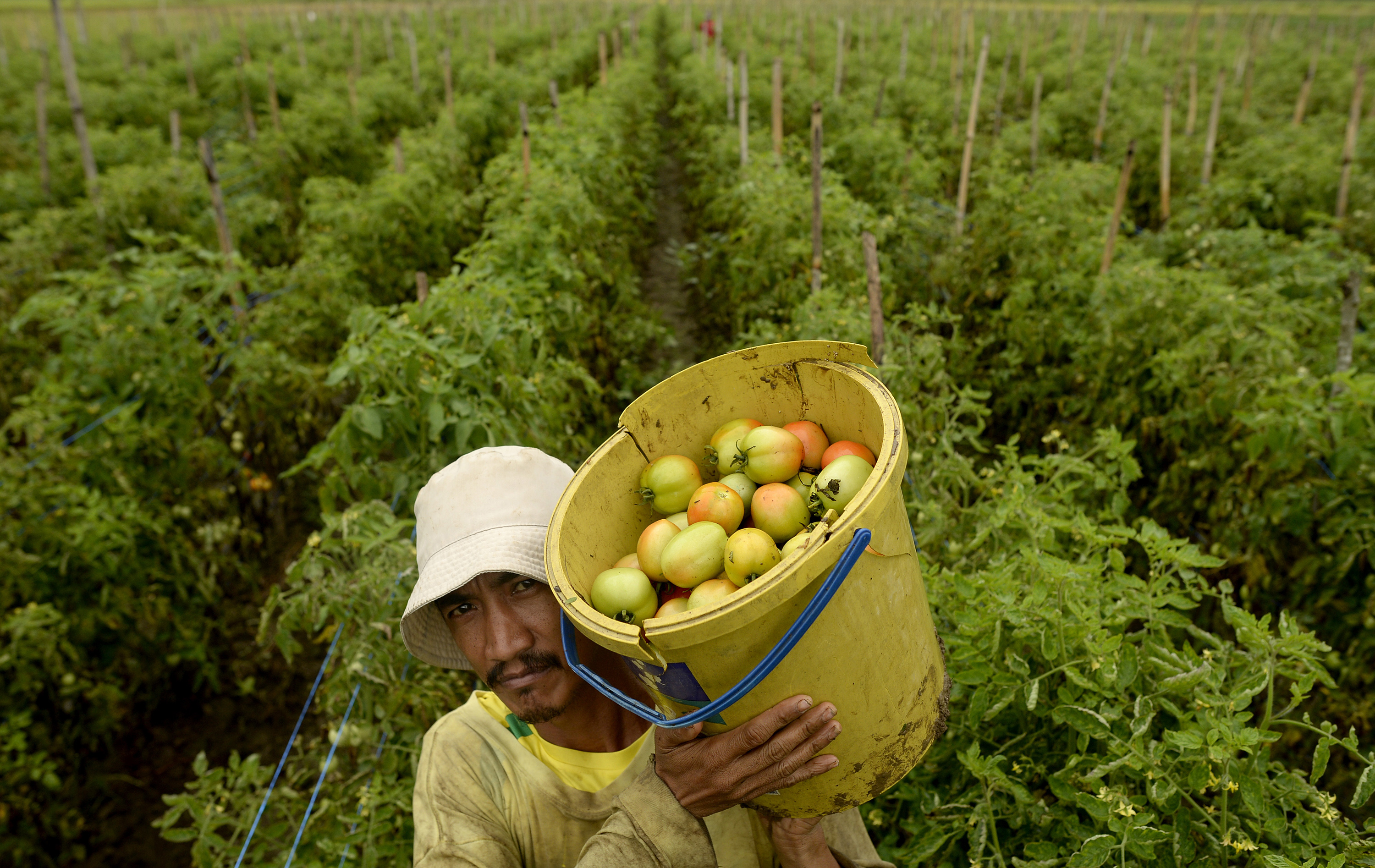 Less dependence on agriculture, a sector sensitive to temperature changes and extreme weather events, means communities won’t lose everything if their farmlands are wiped out by a storm or drought.

The country’s improved ranking may also be a reflection of a boosted drive for disaster preparedness.

“Following the impact of Typhoon Haiyan, we’ve also seen some changes in the disaster risk management framework in the country, aimed at improving preparedness and building resilience to extreme climate events. These factors are gradually lowering the population’s vulnerability to climate change,” said McGeown.

In terms of government action, improvements in climate resiliency initiatives under the Aquino administration “are somewhat limited by corruption, which undermines the efficiency of the government and can limit its ability to develop and effectively implement climate change adaptation strategies,” added McGeown.

But aside from government programs, communities have other compelling reasons to adapt: the desire to make their areas conducive to investment, business opportunities, and economic growth.

McGeown said that the incentive of investments “can be a significant driver of adaptation.”

Local government units for instance, see improving the resilience of their transportation, power, and water infrastructure as critical to retaining and attracting investment.

The Philippines has topped other lists measuring risk to climate change. The 2015 Global Climate Risk Index by environmental group Germanwatch ranked the country number one most impacted by climate change in 2013.

Most climate-vulnerable in Africa

The 2016 Index affirms that most of the countries expected to suffer the most from global warming are poor nations in Africa, Asia, and South America.

The Index also shows that Africa is the most climate-vulnerable region in the world. Three of the top 5 most vulnerable countries belong to this region, while 17 out of its 53 countries are under the “extreme” category of the Index.

Africa is especially at risk because of extreme levels of poverty among its population, conflicts, and the inability of its governments to implement climate adaptation policies.

At the same time, it is exceptionally exposed to unpredictable rainfall patterns and prolonged drought which bodes ill for its agriculture sector, food and water security.