Failure of Paris climate summit would be ‘catastrophic’ – pope 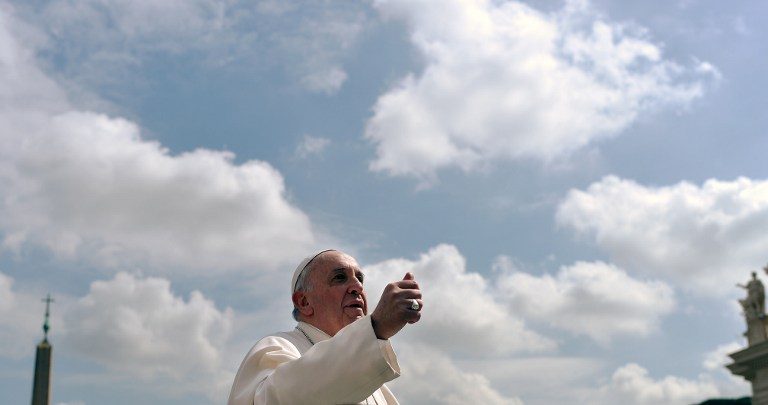 NAIROBI, Kenya – Pope Francis on Thursday, November 26, warned of a “catastrophic” outcome if vested interests blocked an agreement to tackle climate change at the UN talks opening in Paris next week.

“In a few days, an important meeting on climate change will be held in Paris… It would be sad, and I dare say even catastrophic, were particular interests to prevail over the common good and lead to manipulating information in order to protect their own plans and projects,” he said ahead of the summit which officially starts on Monday.

“We are confronted with a choice which cannot be ignored: either to improve or to destroy the environment,” he said in a speech at the world headquarters of the UN Environment Programme (UNEP) in the Kenyan capital Nairobi.

Although he did not go into further detail, the pope has pointed the finger at big industry and blamed first-world countries for failing to act to curb global warming.

Francis, who is on his first visit to Africa, arrived in Kenya late on Wednesday with a warning that the world was facing “a grave environmental crisis” as he began a landmark three-nation tour which will also take him to Uganda and the Central African Republic.

The 78-year-old pontiff has taken on a vocal role in the fight against climate change, injecting a moral voice into a debate usually dominated by scientific, economic and political concerns.

His comments were made just four days before the start of COP21, a 12-day conference in the French capital which aims to secure a climate rescue pact.

More than 150 heads of state and government are due to attend the start of the conference, which is due to wrap up on December 11.

Negotiators are to start talks on Sunday, a day ahead of schedule.

“COP21 represents an important stage in the process of developing a new energy system which depends on a minimal use of fossil fuels, aims at energy efficiency and makes use of energy sources with little or no carbon content,” the Argentine pope said, stressing the need to rethink global models of economic development.

Hope for a deal

“The Paris agreement can give a clear signal in this direction,” said Francis who has drawn a “clear link” between climate concerns and social justice.

“For this reason, I express my hope that COP21 will achieve a global and ‘transformational’ agreement based on the principles of solidarity, justice, equality and participation; an agreement which targets three complex and interdependent goals: lessening the impact of climate change, fighting poverty and ensuring respect for human dignity.”

The leader of the world’s 1.2 billion Catholics took a firm stance on environmental issues earlier this year, issuing a lengthy ‘encyclical’ which said climate change was primarily man-made and one of the main challenges facing humanity.

It also denounced inequality, saying poor countries that are least to blame for rising seas, increasing drought and flooding were likely to be worst hit by the changes and needed the help of rich economies. – Jean-Louis de la Vaissiere and Hazel Ward, AFP/Rappler.com