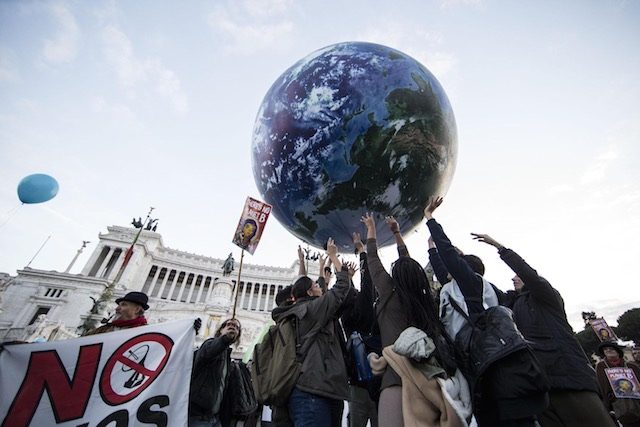 First up was “Mission Innovation,” launched by heads of state including US President Barack Obama and his French counterpart Francois Hollande, as well as Microsoft co-founder Bill Gates.

The multi-billion-dollar initiative sees 20 countries – including the Saudi Arabia, India, China, Indonesia and Brazil – pledging to double their investment in developing clean technology over five years.

“Mission Innovation responds to the urgency of climate change, the opportunity of technological innovation, and the international imperative to tackle this problem in a global way,” said the White House in a statement.

Gates is spearheading a parallel, private-sector part of the plan that will bring together 28 big-name investors – including Facebook CEO Mark Zuckerberg, Virgin founder Richard Branson and magnate-philanthropist George Soros – in the search for new green technologies.

Hot on its heels was another big tranche of money from the World Bank, which announced a $500-million (472-million-euro) initiative to help developing countries curb greenhouse-gas emissions.

The GCF was set up five years ago to help raise $100 billion by 2020 to help poor countries adapt and prepare for climate change.

Canada’s previous government was slammed for pledging just $300 million earlier this year, while Britain, France, Germany and Japan have each pledged over $1 billion.

However, the UN fund has faced criticism on numerous fronts: from cutting corners on transparency and environment safeguards to failing to actually gather the cash it has been promised.

The United States, for instance, pledged $3 billion to the fund last year but has yet to sign an agreement or stump up the money.

Unfazed by the challenges of other multi-national funds, the Commonwealth group of nations announced a few days before the summit a billion-dollar “Green Finance Facility ” which in particular will direct cash to small island nations threatened by climate change.

The Climate Finance Access Hub will be based in Mauritius with regional teams in the Caribbean, Pacific and Indian Ocean. – Rappler.com