Dec 8, 2015 7:10 PM PHT
Pia Ranada
Facebook Twitter Copy URL
Copied
One of the most vulnerable countries in the world, the Philippines wants the world's solid commitment to help fund programs to protect its citizens against climate change impacts 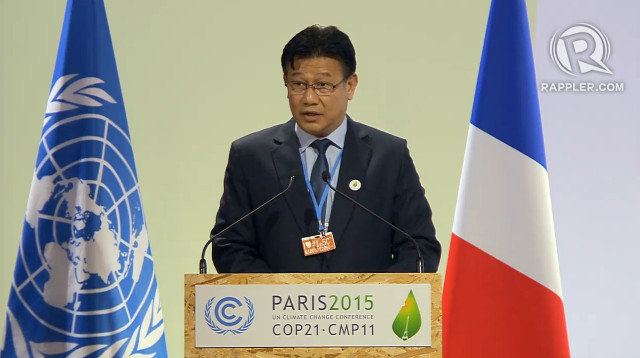 This was one of the main points raised by the Philippines during a high-level session on the second day of the Paris climate summit’s final week. Environment Secretary Ramon Paje delivered the Philippine statement in front of other ministers.

“The Philippine delegation is seriously concerned about the fact that there is not enough provision in the draft Paris Agreement that provides for adaptation finance for the developing countries most vulnerable to the adverse effects of climate change,” he said.

In the current draft of the agreement, the world’s action plan against climate change, “no reference to the amount of finance needed for adaptation” is given in a crucial part of the document which deals with finance, lamented Paje.

“My delegation hereby further intervenes to ensure clear reference to a collective target for adaptation with solid quantitative and qualitative goals for target-setting and progression,” he added.

Protection for the vulnerable

The Philippines, a country battered annually by strong typhoons and now suffering one of the worst El Niño events in history, has been one of the countries aggressively pushing for solid commitments in climate adaptation finance.

This means funds from developed nations intended to help poorer nations protect their citizens against impacts of the climate crisis – including freak storms, devastating drought, and sea level rise.

Adaptation finance is one of the most contentious issues up for discussion in the Paris Agreement on Climate Change.

In fact, all of the adaptation finance provisions in the document were recently taken out, said a climate negotiations insider.

It’s no surprise that poor, vulnerable countries like the Philippines and small-island states in the Pacific like Tonga, Tuvalu, and Vanuatu, as well as drought-affected African countries, are demanding more specific commitments on funding and assistance.

Paje reiterated the Philippine position calling for the total amount of adaptation finance to be reviewed every 5 years. This amount should also be made public, must be grant-based and based on specific needs of the vulnerable countries.

He also reminded ministers about the other major clarion call of vulnerable nations: that the goal of the Paris agreement should be to limit warming to below 1.5°C instead of below 2°C.

What’s in a number? According to scientists, though 2°C could avert climate disaster for some countries, this goal cannot protect countries extraordinarily exposed to climate hazards – countries like the Philippines.

Some 112 countries back the Philippines’ call for this more ambitious, and more difficult target.

The Philippines was recently ranked the top 4th country affected by climate change impacts from 1995 to 2014.

Its experience of Super Typhoon Haiyan (local name Yolanda), which in fact happened during a similar climate summit in 2013, has made it the “poster child” of climate change.

Filipino negotiators have said the country’s tremendous losses from climate-linked disasters have given the country the moral high-ground to demand a more ambitious Paris climate deal. – Rappler.com