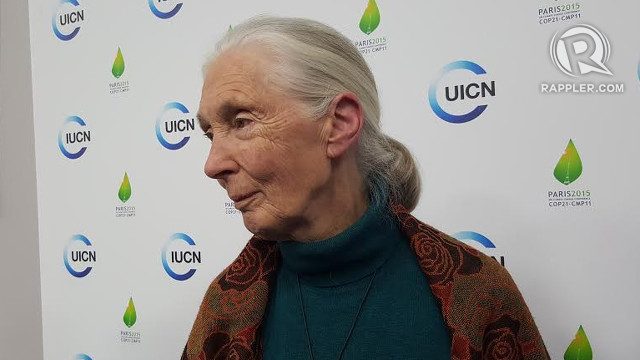 LE BOURGET, France – The UN climate summit in Paris is mostly a meeting of humans deciding what they should do to save the planet.

But one woman gave a voice to animals, other living creatures that also face destruction if global warming continues its runaway course.

This woman was none other than Jane Goodall, the most famous primatologist in the world and known for her motherly love for animals, especially chimpanzees.

At a December 9 side event organized by the International Union for Conservation of Nature (IUCN), Goodall gave a beautiful defense of animals who “have as much right to exist as we do.”

Asked by Rappler why humans should care if animals perish because of climate change, Goodall replied, “Biodiversity is tremendously important, it’s the web of life, the tapestry of life. Where you pull out one thread of the tapestry, it starts disintegrating.”

Countless species of animals face extinction in as little as 50 years with the current pace of climate change.

Polar bears, for instance, will suffer from dwindling Arctic ice due to global warming. Fish species and corals may not survive higher levels of acidity and warmer temperatures in ocean waters. (READ: 10 animals threatened by climate change)

So why should humans care if one species of animal is wiped out from the face of the Earth?

“Because we cannot tell when one piece of it disappears what effect that will have. There will be a ripple effect,” said Goodall, who is now 81 years old.

Another way to answer the question is to look at the rights of animals as individuals, she elaborated. (READ: As diplomats talk climate, giant blue whale greets Parisians)

“The point is that every animal, especially the higher animals, they’re individuals, they have personalities. They have feelings, they can solve problems. They have as much right to exist as we do,” she stressed.

Goodall became famous for studying, over 5 decades, the social and family life of chimpanzees.

She became controversial for giving names to chimpanzees (like Fifi, Goliath, Frodo) she was studying instead of just numbering them, as was the convention at the time.

The British scientist was the first to observe “human actions” in chimpanzees like hugging, kissing, tickling, and using tools.

She challenged humanity to think beyond their own survival.

“Why do we think that we humans are so important? Why should we be more important than a chimpanzee, orangutan, a cow, a spider? And it’s just our arrogance. The indigenous people don’t think that way. They talk about the animals as our brothers and sisters.”

She ended with a warning to humans who use up more than humanity’s share of the Earth’s bounty: “We do it to our peril because if we go on much longer, business as usual, then I don’t look with much hope to the future in 50 years time.” – Rappler.com