One giant leap: PH microsatellite a step closer to launch 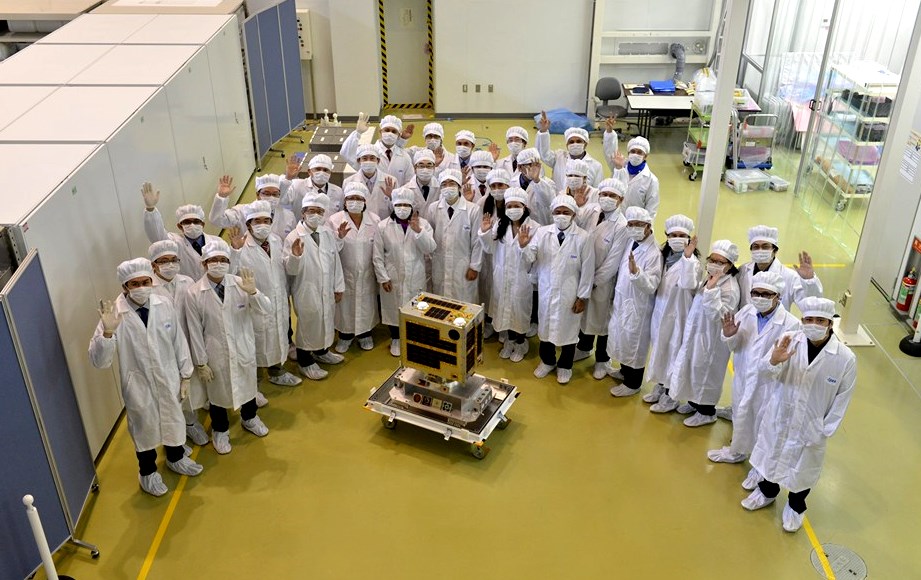 MANILA, Philippines – A proudly Filipino-made microsatellite is one step closer to reality.

The Philippines’ Diwata microsatellite has been formally handed to the Japan Aerospace Exploration Agency (JAXA) on Wednesday, January 13, in preparation for a launch into space by April.

The handover was held in Tsukuba City, Japan, attended by representatives from JAXA, the Philippine Department of Science and Technology (DOST), and Japanese institutions Tohoku University and Hokkaido University.

The Diwata – one of two micro-satellites being developed by the country – is part of the Philippine Scientific Earth Observation Microsatellite (PHL-Microsat) program under the Philippine Council for Industry, Energy and Emerging Technology Research and Development of the DOST.

The aim of the program is for the Philippines to have its own microsatellites in space for disaster management programs, weather forecasting, agriculture, forestry, fisheries, mining, and cultural landmarks preservation, among others.

The microsatellite will use “cutting-edge technology” designed and assembled by Filipino scientists and engineers under the guidance of Japanese experts from the two universities, the DOST said in a statement Wednesday. (READ: Introducing Diwata, the first Philippine-made satellite)

Weighing just 50 kilograms, it “will be able to send critical data on weather systems which are crucial for our farmers to adjust planting methods and procedures in the light of climate change,” the DOST said.

“By investing in our intellectual resources, harnessing the best minds in our country, we developed Diwata to provide our people the opportunity to reap the many benefits it offers,” Science Secretary Mario Montejo was quoted in the statement as saying.

Now in JAXA’s hands, Diwata will undergo final tests, before it is turned over to the National Aeronautics and Space Administration (NASA), who, along with SpaceX, will then take charge of its deployment to the International Space Station (ISS).

The launch date is tentatively set for April.

Once launched, a ground station in Subic, called the Philippine Earth Data Resources Observation (PEDRO), will receive the data from the microsatellite.

The PHL-Microsat project will cost the Philippines P324.8 million ($7.3 million) over the course of 3 years, until 2017. Another P515.92 million ($11.6 million) will be shouldered by Tohoku and Hokkaido Universities. (READ: Is PH ready for liftoff?)

It will carry 3 main payloads used for measurement and detection: a High-Precision Telescope, a Spaceborne Multispectral Imager, and a Wide Field Camera.

It is expected to pass 4 times a day over the country once up in low-earth orbit (400 to 420 kilometers from the ground) at a speed of 7 kilometers per second. Each pass will last around 6 minutes – allowing it to capture up to 3,600 images a day.

“We at the DOST believe that this is a big step forward to attaining technological self-reliance by harnessing the power of science, technology and innovation,” Montejo added. – With reports from Pia Ranada / Rappler.com