People’s project: How Ilonggos turned a road into a riverside park

Mar 23, 2016 7:00 PM PHT
Facebook Twitter Copy URL
Copied
Iloilo City's Esplanade, a linear park by the river, was born out of the Ilonggo people's desire for a walk-friendly road – and the government listened 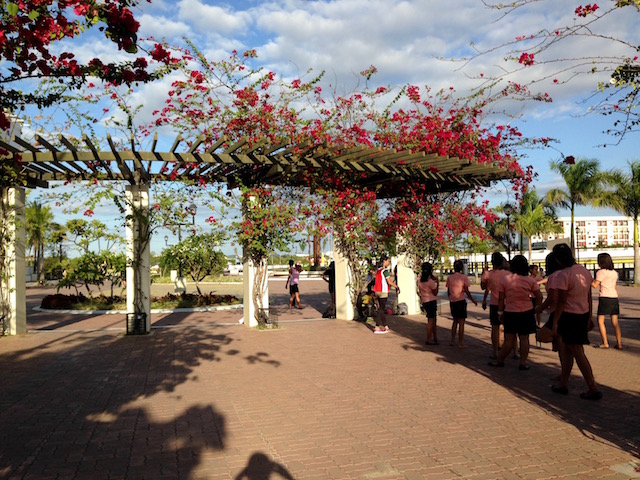 ILOILO CITY, Philippines – It’s a hot summer day in the Philippines’ city of love, but the heat is nothing to a group of young Filipinos who seem to be in the middle of a dance routine. Their studio lies by the Iloilo River, their rehearsal space surrounded by palm trees and violet-pink flowers, at the public park that the Ilonggo people are proud to claim as their own.

Motorized vehicles reign supreme on Philippine roads, and Iloilo City is no exception, with cars and jeepneys roaring across the arteries of this city day in and day out.

But the Esplanade is the game changer. Here, Ilonggos have swapped 4-wheeled motorized vehicles for two-wheeled ones. The 1.2-kilometer riverside lateral park, which opened in 2012, is now a popular site for joggers, bikers, tourists, and locals looking for some breathing space in the bustling hub of Western Visayas. It is a stretch of peace and tranquility in an otherwise busy part of town.

It wasn’t originally meant to be that way. What is now the Esplanade was supposed to have been another road to ease traffic along the congested General Luna Street. It was also intended to help alleviate flooding in the area.

Locals, though, found a different use to what had once been a stretch of asphalted road that they used as a shortcut.

“People started walking along this stretch because it was nice. Teenagers started skateboarding, and then there were bikers…. And then other people used it for leisure activities, to bike, to jog,” said Iloilo city planning and development office head Jose Roni Peñalosa.

This eventually prompted local officials to reconsider: why not just make it a linear park instead of a road?

For Iloilo City Councillor Jay Treñas, the Esplanade was born out of the Ilonggo people’s own clamor for what they wanted in their city.

“The people themselves said, no, we don’t want cars, we want to walk here. The Ilonggo people fell in love with that street,” Treñas said.

City officials point to the Esplanade as an example of how government can respond to their own constituents’ demands for a more livable city. Calls to turn the road into a park did not initially get local officials’ nod, because funds had been allocated specifically for the construction of a road.

“But the demand intensified. The people here didn’t have enough public spaces for leisure. All we had were district plazas,” Peñalosa said.

The city government eventually gave in to public clamor, and started work developing that riverside stretch into a public park. Senate President Frank Drilon, who hails from Iloilo, supported the project with funds from his Priority Development Assistance Fund.

Translating the Esplanade from blueprint to reality needed a collaborative effort to address the challenges in creating the landscaped riverside park. Key to the project was rehabilitating the city’s lifeline, the Iloilo River.

Home to several native mangrove species and native fish, the river by then had deteriorated. It had become a catchment of waste and garbage, with hundreds of informal settlers living near the waterway adding to the pollution.

Rehabilitating the river was a community effort. The Iloilo River Development Council was at the forefront of the campaign, which also involved various sectors, including private business groups and educational institutions. Businesses made river cleanups part of their corporate social responsibility projects, while schools made them part of the national service training programs.

The administration of incumbent Mayor Jed Mabilog was also able to relocate about 1,000 informal settlers into proper housing sites.

Renowned Filipino architect Paulo Alcazaren, who also worked on the Singapore Quay and River Esplanade, was tapped to draw up layouts and designs for the public park. But the people, too, had a say in how they wanted the riverside park to look like.

“The people decided on the design, because the designs that Paulo Alcazaren made was circulated. Everyone put their hearts to it, from Senator Drilon to the people cleaning in that area. That’s how the Esplanade came about,” Peñalosa said.

To keep in line with the vision for Iloilo to become a livable city, the park had to be pedestrian and bike-friendly. And to be that way, it also had to be aesthetically pleasing. The Esplanade isn’t just a long, straight stretch of road beside the river; it winded around the waterway, allowing for wide view decks and park benches.

Trees dotted the entire stretch of the Esplanade, providing a “green walkway” connecting Diversion Bridge to Carpenter Bridge, which now links the second phase of the Esplanade project.

The Esplanade is the city’s answer to urban planners’ calls to have more open spaces for people instead of vehicles. The public park provides locals with breathing space, and encourages walking and cycling in the area. (READ: 5 most walkable, bikeable PH cities)

Despite being frequented by joggers and bikers, the Esplanade is surprisingly clean. No litter on the paved path, no graffiti on the viewing decks and benches. Street lamps illuminate the area for sunset strolls, which a lot of locals do: lovers sitting side by side on benches near Carpenter Bridge; friends leaning out over railings, taking photos of each other; parents enjoying time with their children.

Treñas recalled how he used to be one of the naysayers, the critics who didn’t believe it was possible to clean up the polluted river and create a green space for the people of the city to enjoy.

“The Ilonggo people already had that sense of ownership. They knew that they owned that portion of the road and they took pride in it and they cleaned after themselves,” he said.

“The Esplanade was the project of the Ilonggo people, not just of one person. It was the collective voice of everyone who just said we don’t want cars, we want somewhere we can walk, somewhere where there’s no pollution,” he added.

The project was eventually expanded into the 2.6-kilometer Esplanade 2 on the other side of the river, which has its entrance by the historic Carpenter Bridge, creating a walk-friendly loop between the two bridges. The next phase of the project, the Esplanade 3, is also in the works, connecting the city proper to Lapuz district.

Local officials say the Esplanade is only one part of widespread efforts to make the city a model for other developing cities when it comes to environmentally-sustainable transport and non-motorized mobility.

Treñas, for instance, is pushing for a resolution that would require bike lanes to be included in road development projects throughout the city. He also plans to create a bicycle loop around the university area, making it easy for students and faculty to go around without motorized vehicles.

The city’s green plans also take into consideration Iloilo’s rich culture, building around heritage zones and making these areas bike-friendly and pedestrian-friendly. A design for a green walkway connecting Sunburst Park in the city’s business district to Plaza Libertad has already been drawn up, Peñalosa said, with the National Historical Commission of the Philippines set to fund it.

But the long-term goals include not just providing the infrastructure for leisure walking. The city wants to encourage citizens to make walking and biking part of their everyday lifestyle – in going to school, to their offices, and back home. Key to this, Peñalosa said, is making sure that there are ample sidewalks and covered walkways, which would allow people to walk even under extreme weather conditions.

To keep up the momentum for the city’s green efforts, Iloilo must do what it did with the Esplanade: make it a collaborative effort.

“You need to have all people working together, supporting and believing in the concept. What makes it sustainable is the people.” – Rappler.com