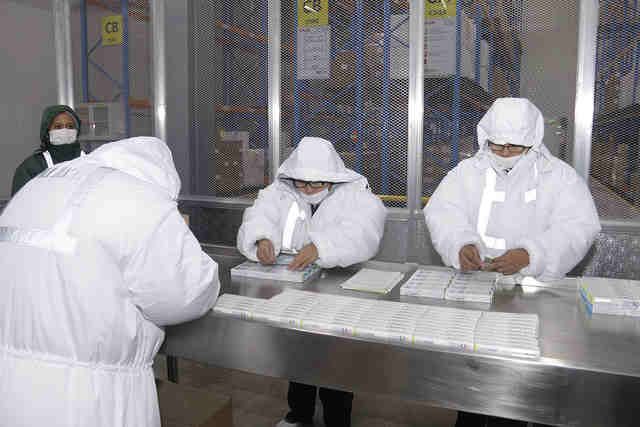 Facebook Twitter Copy URL
Copied
The health department says Dengvaxia, which will be given for free to over one million Filipino children starting next week, has undergone extensive clinical trials

MANILA, Philippines – The Department of Health (DOH) on Monday, March 28, dispelled safety concerns on the dengue vaccine that is set to be administered to Filipino schoolchildren starting April.

In a press conference, DOH Secretary Janette Garin said the Dengvaxia vaccine, developed by French pharmaceutical giant Sanofi, has undergone extensive clinical trials and has been vetted by international medical experts, even earning the approval of the World Health Organization (WHO).

Joining Garin in the press conference were medical experts who gave assurances that reported side effects from taking the vaccine were normal and were to be expected.

“It is the product of 20 years of extensive clinical research. More than 40,000 patients were involved,” said Dr Sally Gatchalian of the Philippine Pediatric Society.

Garin was responding to reports that the vaccine was not safe, and that 4 participants in a clinical trial had died as a result of the vaccine.

While Garin confirmed that 4 people died, she said that their deaths were completely unrelated to the vaccine. Three died due to a vehicular accident and one was a victim of homicide, the health chief said.

Garin added that based on clinical trials, the incidence of systemic side effects – such as fever and pain and redness on the injection site – did not differ among those who were given the vaccine and those who were the placebo group.

She said that these side effects were considered normal.

Garin underscored the importance of the dengue vaccine, which is set to be administered to Filipino schoolchildren in 3 regions next month.

She said that with immunization, hospitalization due to dengue will go down by 81%, while 93% of patients will have reduction in severity.

In January, the health department said that more than one million Filipino schoolchildren in 3 regions with high incidence of dengue will be among the first recipients of the vaccine.

The DOH has allocated P3.5 billion from its savings to buy the vaccine, which will be given to 9-year-olds in the National Capital Region (NCR), Central Luzon, and Calabarzon beginning April.

DOH spokesperson Lyndon Lee Suy earlier said that the first dose of the vaccine will be given to students ahead of the rainy season, when the number of dengue cases is expected to increase.

He added that the school-based immunization will determine whether the procurement of the vaccine can be included in the DOH budget in the coming years.

Dengvaxia arrived in the Philippines last month, almost two months since its sale in the country was approved. The vaccine provides protection from all 4 dengue strains, and is recommended for all healthy individuals 9 years old to 45 years old, to be given in 3 doses at a 6-month interval.

Dengue is a disease common in tropical and sub-tropical countries, and is transmitted through the bite of an Aedes mosquito. According to the WHO, as many as 400 million people are infected with dengue worldwide every year.

The Philippines is one of 4 countries in the Western Pacific region which posted the highest incidence of dengue in recent years.

In 2013, the DOH reported 204,906 dengue cases – the highest number recorded since the establishment of the National Dengue Prevention and Control Program in 1993.

The number decreased slightly in 2014, but according to the health department, data from 2015 suggested an increasing trend in the coming years.

While the DOH said the vaccine will be an “additional strategy” in the fight against dengue, it also noted that active measures such as cleaning one’s surroundings remain better because these target other mosquito-borne diseases as well. – Rappler.com