BERLIN, Germany – One sunny morning in central Berlin, a gaggle of 11-year-olds run across their school yard toward a peculiar wooden structure surrounded by the trees and bushes of their garden.

The structure is a standing frame housing several levels of soil, wood, bricks, and twigs. The soil, wood, and bricks have been punctured with holes.

“This is our bee hotel,” one of the kids tells me in German.

At the moment, no bee has checked in but the students of the Gustav Falke School are happy to wait. Aside from the bee hotel, they’ve also built bird houses which now overlook the school garden from their tree-top perches.

Building houses for creatures threatened by climate change is just one of the student projects of the school, one of the so called Berlin Climate Schools.

In 2009, it won its first award as a climate school after it entered a competition held by the Berlin government to encourage schools to raise pupils’ awareness on climate change. 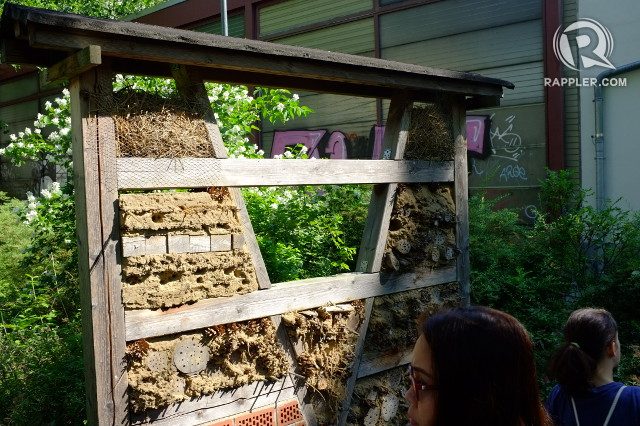 The Gustav Falke School would win the same prize 5 more times, proof of how well it has integrated climate change and environmentalism in its curricula.

To find out how the school manages to do this requires only a walk through the school garden where students spend most of their time when learning about climate change.

Tucked under some bushes in one corner of the yard is a hedgehog house. A few steps away there is a child-made pond with waterlilies which the students use to learn about the hydrological cycle.

A stone’s throw away, herbs, and vegetables planted by the students grow in square plots of soil, waiting for recess time when teachers and students pluck some of them to add to their meals.

Planting your own vegetables may sound like great fun, but it’s also a great way to teach students about sustainability.

In a world with a changing climate, food production is on both sides of the battle. On one hand, ways of growing food are at risk because of warmer temperatures and extreme weather events that could ravage crops. On the other, food production itself emits greenhouse gases that drive these changes in the climate.

The school’s climate change program began in 2009 through the initiative of a group of teachers. Since then, 460 out of its roughly 600 students receive education modules on climate change and sustainability.

But the core climate change curriculum is taught to grade 5 and 6 students or 11 and 12 year-olds, said school principal Sabine Gryczke.

The curriculum, at its core, is a natural sciences class but with a focus on climate change, environmentalism, and principles of sustainability.

For instance, students are taught how to save energy in their use of appliances at home.

“The pupils here are kind of like pioneers. They bring back the lessons to practice at home,” said Gryczke.

The principles and theories are taught through hands-on projects that usually require students to go outside. In one project, students had to envision their school as a green school. They had to make a to-scale model of how their school would look like if it was built with sustainability and climate change adaptation in mind.

So they went outside to measure their school building’s dimensions so they could make a faithful 1:100 scale model. To “greenify” it, students added more trees and green spaces. One student confessed that she couldn’t resist adding a swimming pool.

With the help of their teachers, the students made some of these ideas into reality. They planted crawling plants against school building walls so that as the vine-like plants grew, they would provide insulation for the walls.

This natural insulation helps keep the interiors of the building warm in winter and cool in the summer thereby reducing the amount of electricity needed for heating or cooling systems, one student explained.

One of the observations discussed during these activities is the unusually hot summers the children have been experiencing in recent years.

In the classroom, teachers pose students questions like, “What has an apple got to do with climate change?” and “How can a car be environment-friendly?”

I asked the students how they define climate change and got this wonderfully specific description from a boy student: “If you drive a car and your car will emit CO2 and the CO2 stays in the air and once the ray of light gets in the air of the earth, it gets trapped by the CO2. The reflection gets trapped and causes the raising of the temperature.”

Three hours away from Berlin by train lies the city-state of Hamburg where another type of climate-saving curriculum is being taught to students.

But the main teaching material was developed by a transportation association, not school teachers.

The Hamburger Verkehrsverbund (HVV) or Hamburg Traffic Association, a consortium of private and public transport companies, created a school advisory service to teach Hamburg students how to use public transportation.

The course is divided into 3 parts. The first lesson is safety, taught to pre-schoolers. Using a character called Leopold the Lion, students are taught how to properly wait for a bus (on the sidewalk, not on the road) or how to ride a train safely (wait for your turn, hold the handrails when standing up).

Because Hamburg is a riverside city, students also learn how to ride the many ferries that ply the Elbe River, a system which is also part of the city’s public transportation network.

The second part of the course is independent use of public transport. Here, students are taught how to ride the bus, train, or ferry on their own. Schools and the HVV School Advisory Service hold a “race” in which students are given instructions and have to get down at the right stations and answer questions about public transportation.

The 3rd part of the course teaches students about the environmental aspect of taking mass transportation.

By the time students finish primary school, they should be ready to take public transportation to their secondary school, said Wachowiak.

The HVV School Advisory Service provides the training for free for all Hamburg schools. The budget comes from the roughly 30 transportation companies that are members of the association. These companies are the ones that run the train, bus, ferries, and bike rental networks in the city.

The initiative started 25 years ago when founders of the association thought road safety education should go further.

“They wanted more people to learn the environmental aspect of transportation and the integration of transport services. Public transport is a contribution to efforts against climate change,” said Christoph Unland of the HVV School Advisory Service.

It’s also not hard to see how the transport companies would benefit from such a school service. They are basically teaching future customers how to use their services.

But the benefit is mutual. Young Hamburg residents learn how to keep safe when commuting. The entire city benefits from more public transport users which means less air-polluting cars on the roads.

Public safety is a particular concern for the city. According to HVV data, there are around 800 transport-related accidents involving children every year.

While Unland is hesistant to say their efforts have been successful, some observations at least point to a growing trend favoring mass transportation among Hamburg youths.

One trend, observed in other parts of Europe as well, is that the number of young people who want to own a car is decreasing and so are applications for drivers’ licenses.

“Twenty years ago, pupils said it’s important to have a car. Now, having an iPhone is more important,” chuckled Unland.

This trend could also be attributed to new forms of mobility like bike rental and car rental that is rendering car ownership obsolete for certain people.

Students in Hamburg and Berlin are already getting a headstart. – Rappler.com