Jul 27, 2016 9:23 AM PHT
Rappler.com
Facebook Twitter Copy URL
Copied
'These cases, which stemmed from respondents' petition for Writ of Kalikasan, were mooted by the expiration of the Biosafety Permits... and the termination of Bt talong field trials subject of the permits' 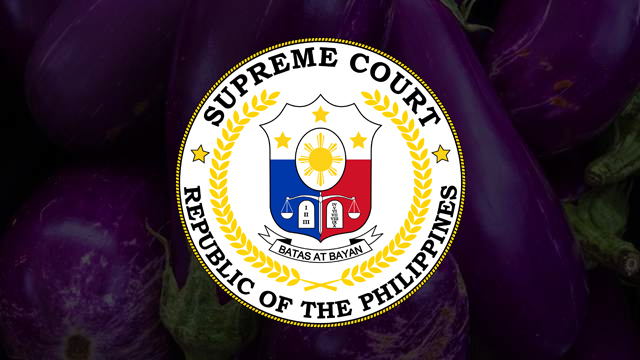 In a unanimous decision, the SC granted 9 motions for reconsideration filed by Bt (Bacillus thuringiensis) talong (eggplant) proponents who earlier asked the High Court to set aside its December 2015 ruling on the ground of mootness. Among these proponents are:

“These cases, which stemmed from respondents’ petition for Writ of Kalikasan, were mooted by the expiration of the Biosafety Permits issued by the Bureau of Plant Industry and the termination of Bt talong field trials subject of the permits,” the SC, in a media briefer released by spokesperson Theodore Te, said.

“These effectively negated the need for the reliefs sought by respondents as there was no longer any field test to stop.”

Petitioners also argued the SC should not have resolved the case on its substantive merits due to mootness, and should not have acted on the constitutional question of whether Department of Agriculture (DA) Administrative Order 08-2002 was unconstitutional, as this matter was only “collaterally raised”.

The SC in December 2015 not only permanently stopped the field testing for Bt talong and temporarily stopped any application for field testing, contained use, propagation and importation of GMOs.

The 2015 decision affirmed the Court of Appeals’ (CA) May 2013 ruling which stopped the nationwide field testing of the Bt eggplant, based on the precautionary principle that “there is no full scientific certainty yet as to the effects of Bt talong field trials to the environment and to the health of the people.”

But the SC on its latest ruling noted that when the CA rendered its decision in 2013, “the relief sought and which were granted by the CA were no longer capable of execution”. – Rappler.com