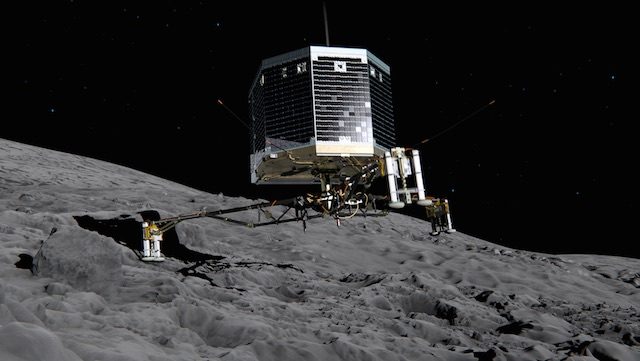 Facebook Twitter Copy URL
Copied
(UPDATED) 'This is the end of a... fascinating and successful mission for the public and for science,' Andreas Schuetz, spokesman for German space agency DLR, says

Writing an extraordinary chapter in space history, the washing machine-sized craft was the first to land on a comet – primeval rubble from the formation of the Solar System.

Its plucky exploits captured the imagination of children, and many adults, who followed its successes and tribulations via Twitter and an animated cartoon series.

But after more than 12 months without news, it was decided to preserve all remaining energy available to Philae’s orbiting mothership Rosetta, the European Space Agency (ESA) announced in a blog entitled: “Farewell, silent Philae”.

Rosetta will remain in orbit around comet 67P/Churyumov-Gerasimenko for another two months.

It will crashland on September 30 to join Philae in their final resting place, concluding an historic quest for cometary clues to the origins of life on Earth.

“This is the end of a… fascinating and successful mission for the public and for science.”

Part of a 1.3-billion-euro ($1.4-billion) ESA mission, Philae was launched into space in March 2004, riding piggyback on Rosetta.

The pair travelled some 6.5 billion km (four billion miles) – aided by gravity boosts from Earth and Mars — before entering 67P’s orbit in August 2014.

Philae’s harpoons failed to fire into the comet surface, and it bounced several times.

The tiny robot ended up in a ditch shadowed from the Sun’s battery-replenishing rays, but managed to run about 60 hours of experiments and send home valuable data before entering standby mode.

As 67P neared the Sun on its elongated orbit, Philae got a battery boost and emerged from hibernation in June 2015, sending a two-minute message via Rosetta, eliciting great excitement on Earth.

But after eight intermittent communications, the lander fell permanently silent on July 9, 2015.

Rosetta has continued to monitor the comet, but without catching sight of its long-lost charge, even from as close as 10 km away.

In February, ground controllers said they believed Philae was in eternal hibernation — though they opted to keep an ear open just in case.

“It’s time for me to say goodbye,” said Philae’s Twitter account, announcing communications “will be switched off forever…”

As the comet moves further and further away from the Sun — some 520 million km by end July — Rosetta needs to save energy for her final weeks.

“We need to maximise the power available to Rosetta’s scientific instruments, and thus had no choice but to turn off the ESS,” ESA senior science advisor Mark McCaughrean told AFP.

The ESS is the Electrical Support System on board Rosetta, used to send home the results of Philae’s science experiments and status reports.

“The power will only dwindle further, and so now the focus turns fully to Rosetta, whose amazingly succesful scientific mission will come to an end on 30 September,” said McCaughrean.

“Everyone involved will be extremely sad, of course, but equally enormously proud of what has been achieved by this unique space mission.”

Scientists will be busy for years analyzing the data sent back by Philae and Rosetta.

Comets are deemed to be balls of primitive dust and ice left from the early years of the Solar System.

Their makeup interests scientists who speculate that comets may have seeded Earth – possibly other planets as well – with the ingredients for life. – Rappler.com