Sep 7, 2016 1:37 PM PHT
Pia Ranada
Facebook Twitter Copy URL
Copied
The motion filed with the International Union for Conservation of Nature recommends the suspension of the 'exploitation of natural resources' in the disputed sea 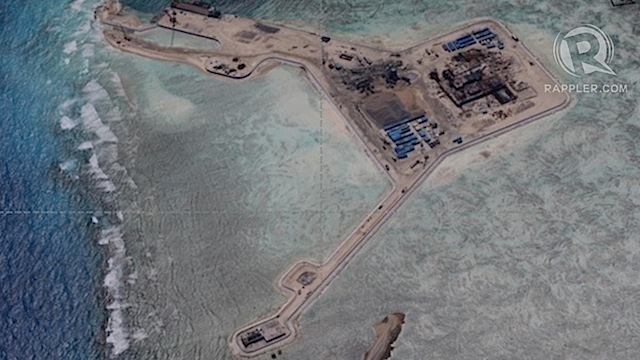 MANILA, Philippines – A motion to create a “marine peace park” in the West Philippine Sea (South China Sea) has been filed with the International Union for Conservation of Nature (IUCN).

Antonio Claparols, president of the Ecological Society of the Philippines, confirmed this to Rappler on Wednesday, September 7. His group was among those who co-sponsored the motion, filed Monday, September 5, during the ongoing IUCN World Conservation Congress in Hawaii.

The motion was filed by Joseph Moravec of the Center for Environmental Legal Studies in New York with 11 co-sponsors, including the Ecological Society of the Philippines, and the Sierra Club.

“It is one of 6 [motions] that will be opened in the plenary…It is an emergency motion,” Claparols said in an email message.

Entitled “Conservation in the South China Sea,” the motion recommends that “all States and authorities in this region suspend exploitation of natural resources, prospecting, or other activities, pending the study of how to establish marine protected areas in the South China Sea and Coral Triangle.”

If accepted for deliberation, the motion is set to be taken up by IUCN member organizations on Friday, September 9.

Amid tensions between the Philippines and China over the disputed sea, the motion “notes” the historic ruling of the Permanent Court of International Arbitration “in the matter of The Republic of the Philippines vs. The People’s Republic of China, on 12 July 2016, and the Court’s findings of damage to the environment in the South China Sea.”

It also recognizes the UN Convention on the Law of Sea and its call for the “protection of the oceans” and “regional cooperation.”

Rather than ignite tensions over the disputed sea, Claparols believes the motion would bring a peaceful resolution to the conflict.

“The creation of a marine peace park and sanctuary is the ideal solution to the hotbed that the South China Sea has become, and is the peaceful solution for all countries claiming the territory,” he said.

Claparols, involved in crafting the motion, said the motion is necessary to save the rich marine resources in the West Philippine Sea.

“Our reason for doing this is to save our coral colonies in the South China Sea. The coral colonies there replenish the entire Pacific Ocean,” he told Rappler.

Studies by scientists from the University of the Philippines Marine Science Institute and Dr John McManus found that “our coral reefs are 5 times richer than any coral colonies,” said Claparols.

The dispute over the West Philippine Sea and the tensions there that hinder conservationist efforts mean that “a marine peace park is the only way” to protect the sea’s biodiversity, he added.

China has been undertaking massive reclamation activities in the West Philippine Sea, activities that have damaged hundreds of acres of coral reef.

But Claparols thinks the creation of a marine peace park will be to China’s benefit.

“This will actually benefit China and all of us as we are saving the marine environment and the fish stock,” he said.

The motion is expected to be controversial since the current president of the IUCN, Zhang Xinsheng, is Chinese.

“If it is adopted, then a strong signal will be sent to the world and China,” said Claparols.

It is uncertain if China will recognize the motion even if it is adopted by the IUCN. Beijing refused to recognize the Hague ruling.

“Should China agree, we are saving the world as all oceans are connected. Conservation is a solution to conflicts,” said Claparols.

The idea of creating a “marine peace park” to ease tensions among countries claiming the West Philippine Sea is not new.

In the Philippines, it has been suggested by personalities like Supreme Court Senior Associate Justice Antonio Carpio and environmentalist Antonio Oposa Jr.

The IUCN is the world’s largest and among the most prestigious networks of environmental groups and experts.

With its 1,300 members, it is a recognized global authority on the status of the environment and measures needed to protect it. The IUCN is most known for its Red List of Threatened Species.

The IUCN World Conservation Congress, a gathering of its member organizations, meets only once every 4 years.