From cancer research to paying it forward 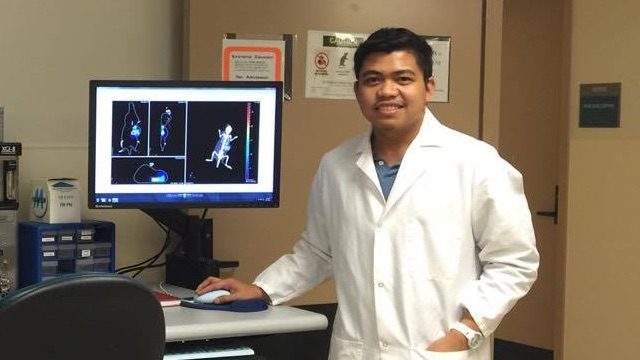 Facebook Twitter Copy URL
Copied
Inspired by his family and his country, a Filipino scientist focuses his research on helping find a cure for cancer

MANILA, Philippines – A Filipino scientist and his colleagues are developing a means to diagnose and treat prostate cancer using light.

Unlike the drugs used for chemotherapy that damage healthy cells, postdoctoral researcher Joey Mangadlao and his team are developing “smart molecules” which target specific cells once introduced in the body.

“In particular, I’m working on the so-called photodynamic therapy (PDT), a non-invasive and function-sparing oncologic intervention,” he said.

According to World Cancer Research Fund International, a not-for-profit organization, more than 1.1 million cases of prostate cancer were recorded globally in 2012. This accounts for about 8% of all new cancer cases and 15% of cancer cases in men.

As of now, among the treatment options for cancer patients are chemotherapy, hormone therapy, radiotherapy, and surgery. PDT is currently available to treat or relieve the symptoms of esophageal cancer and non-small cell lung cancer. A type of PDT drug is also available for actinic keratosis, a skin condition that could develop into cancer.

Mangadlao feels excited at the thought that his research could potentially have significant impact on mankind. But more so, because the study is close to his heart – he lost his mother to cancer in 2013.

“Though studying abroad may sound luxurious to some, it’s actually very difficult not only because of all the adjustments you have to make, but also, at times when you needed to be home and you just can’t,” he said, recounting how he was not able to come home for his mother’s wake.

The 28-year-old Mangadlao hopes to become a successful scientist for his family and his country. While he considers the state of science in the country as a challenge, he said that he has seen improvements and knows of Filipino researchers abroad who decided to come back to the Philippines for good.

While in college at the University of the Philippines Diliman, he was part of the team that presented a “kid-friendly” poster about DNA which won an award in the 2008 Asian Science Camp in Bali, Indonesia.

Interestingly, the moments Mangadlao treasures the most are the ones when he can share his thoughts with students, especially in the provinces.

“I receive messages from high school students and teachers asking me to help them with their investigatory projects. Others asked me if I can video-chat with their students so they will be all the more encouraged. They may not come up with the most world-changing projects, but hey, that’s where I started,” Mangadlao said.

“The more we engage our young people [in] science, the more likely they will choose it as a career path,” he added.

Sharing his knowledge and experiences with students is Mangadlao’s way of paying it forward. After all, he was inspired by two teachers – husband and wife – who nurtured his interest in science, even as a young student in Prosperidad, Agusan del Sur. These teachers were his research adviser Norma Dagondon-Cullo and his math and statistics teacher, Danilo Cullo.

“Even before I became their student, the couple [was] successful in sending students abroad for international competitions. But our relationship was, I’d say, more special,” Mangadlao said.

“They mentored me and poured their all to me. I was the last student they mentored before they left for New York.”

All the efforts of his mentors did not go to waste. Right now, Mangadlao is conducting postdoctoral studies at Case Western Reserve University in Cleveland, Ohio. From time to time, he still visits his mentors, who are now high school teachers in New York. – Rappler.com