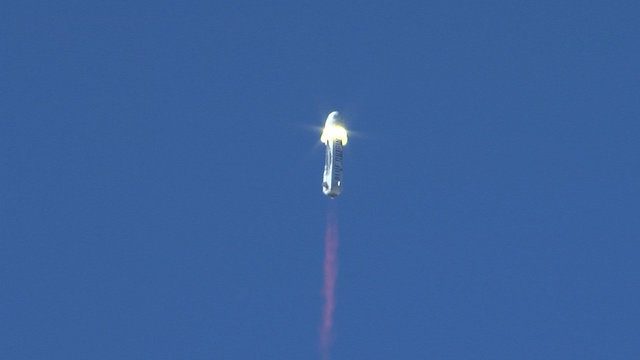 The New Shepard rocket blasted off from a Texas launchpad, then its unmanned capsule separated in mid-air about 45 seconds after liftoff, at a height of some 16,000 feet (4,900 meters).

Powered by an escape motor beneath the capsule, the gumdrop-shaped spacecraft tossed and tumbled a bit before floating back to Earth with the help of parachutes.

“All astronauts on board would have had a pretty exhilarating ride, but a safe ride,” said a commentator on Blue Origin’s live webcast.

Moments later, cheers erupted at mission control as the somewhat scorched and battered looking booster made its way back to Earth as if in reverse, its engines firing as it hovered over the ground and gradually set itself down, upright.

“That is one hell of a booster,” Bezos wrote on Twitter a few hours after it landed.

Beforehand, Bezos had said the force of the capsule’s escape would likely spell the end for the booster, or the portion of the rocket that propels the capsule to space.

“The booster was never designed to survive an in-flight escape,” Bezos wrote in a blog post last month, noting that it had already been flown four times.

“The capsule escape motor will slam the booster with 70,000 pounds of off-axis force delivered by searing hot exhaust.”

Both Blue Origin and its competitor, SpaceX, are capable of landing their rockets back on land, as part of a larger effort to make rocket parts reusable in the coming years.

Bezos said the company plans a retirement party for the booster, which was Blue Origin’s first to fly into space and return for an upright landing, before putting it on display in a museum.

The New Shepard rocket is designed to eventually carry space tourists to the edge of space – defined as the Karman line about 62 miles (100 km) above the Earth’s sea level – and back, perhaps as early as 2018.

The cost of a ticket has not yet been revealed. – Rappler.com