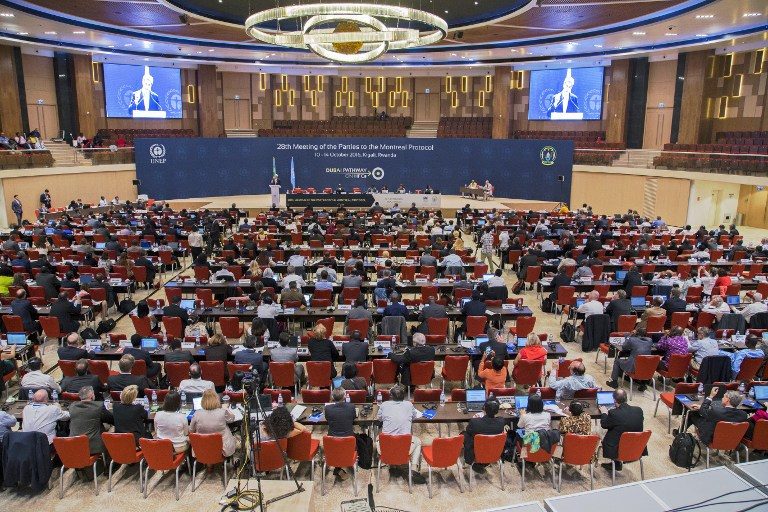 KIGALI, Rwanda (3rd UPDATE) – World envoys reached an agreement on Saturday, October 15, on a timetable for the phase-out of potent greenhouse gases used in refrigerators and air conditioners, a major step in curbing global warming.

The amendment to the 1987 Montreal Protocol on protecting the ozone layer was greeted by applause from exhausted envoys who had worked through the night in the Rwandan capital Kigali to put the final touches on the deal to phase out production and consumption of hydrofluorocarbons (HFCs).

“Last year in Paris, we promised to keep the world safe from the worst effects of climate change. Today, we are following through on that promise,” said UN Environment Programme chief Erik Solheim.

The US Environmental Protection Agency said, “this day will unquestionably be remembered as one of the most important in our effort to save the one planet we have”.

The elimination of HFCs could reduce global warming by 0.5 degrees by 2100, according to a 2015 study by the Institute for Governance and Sustainable Development.

Tough negotiations at the talks – attended by representatives of nearly 200 countries including US Secretary of State John Kerry – had seen major developing nations such as India put up a fight over the timeline to phase out the use of HFCs and the financing of the transition.

Under a timetable released on the website of the Montreal Protocol, rich will have to take action sooner than poorer nations.

HFCs were introduced in the 1990s to replace chemicals that had been found to erode the ozone layer, but turned out to be catastrophic for global warming.

However, swapping HFCs for alternatives such as ammonia, water or gases called hydrofluoroolefins could prove costly for developing countries with sweltering summer temperatures, such as India.

HFCs’ predecessors, chlorofluorocarbons (CFCs), were discontinued under the Montreal Protocol when scientists realised they were destroying the ozone layer.

This blanket of gas in the upper stratosphere protects Earth from the Sun’s dangerous ultraviolet rays.

But it emerged that HFCs, while safe for the now-healing ozone, are thousands of times worse for trapping heat than carbon dioxide, the main greenhouse gas.

According to the Berkeley National Laboratory, air conditioning is the cause of the largest growth in HFCs – and the world is likely to have another 700 million air conditioners by 2030.

HFCs – though they are greenhouse gases like carbon dioxide, methane and nitrous oxide – are not dealt with under the Paris Agreement but under the Montreal Protocol.

A second group of developing countries, including China and African nations, are committed to launching the transition in 2024. A reduction of 10 percent compared with 2020-2022 levels should be achieved by 2029, to be extended to 80 percent by 2045.