Oct 17, 2016 10:27 AM PHT
Agence France-Presse
Facebook Twitter Copy URL
Copied
Europe sends a tiny lander on a 3-day, million-kilometer (621,000-mile) trek to the Martian surface to test-drive technology for a daring mission to scout the Red Planet for evidence of life 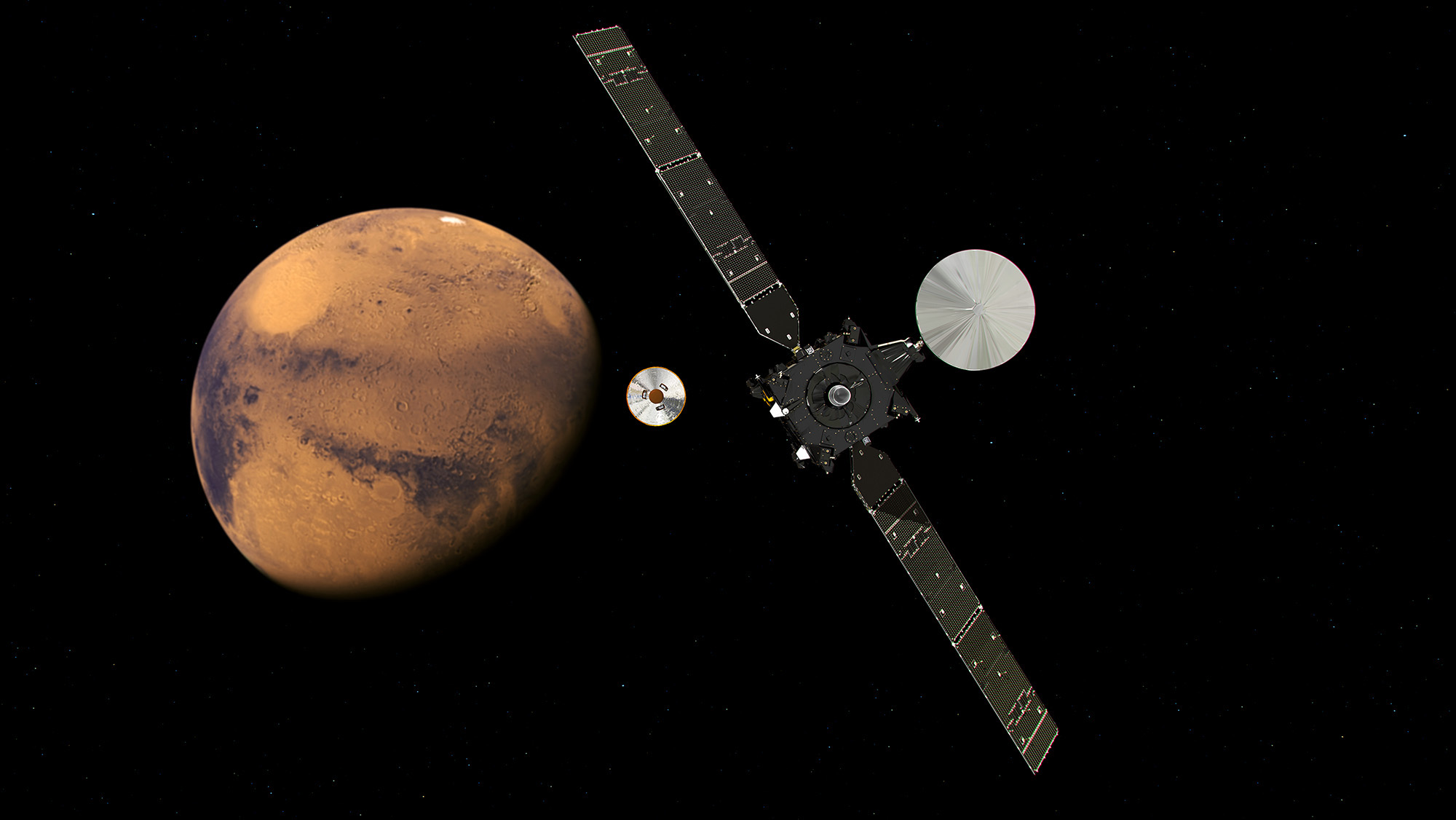 PARIS, France – Europe sent a tiny lander on a 3-day, million-kilometer (621,000-mile) trek to the Martian surface Sunday, October 16, to test-drive technology for a daring mission to scout the Red Planet for evidence of life.

There were nervous moments for ground controllers when the unmanned mothership, dubbed Trace Gas Orbiter (TGO), stopped sending status updates just as it despatched the paddle pool-sized lander, Schiaparelli, on its way.

“Everything is back on track,” spokeswoman Jocelyne Landeau-Constantin of the European Space Operations Centre told Agence France-Presse by telephone after an anxious hour of resetting commands and waiting for a response.

There were “a lot of relieved people,” at mission control in Darmstadt, Germany, she added –  some 175 million kilometers (109 miles) from where the space maneuver was executed. (READ: European lander starts 3-day descent to Mars surface – ESA)

The TGO and Schiaparelli, launched into space in March, comprise phase one of a joint European-Russian Mars-probing mission named ExoMars.

It is scheduled to arrive at Mars next Wednesday, October 26, while the TGO must head for Mars orbit.

ExoMars is Europe’s first attempt at reaching our neighboring planet’s hostile surface after its first failed bid 13 years ago to place the first non-American rover on Mars.

The TGO’s job, apart from carrying Schiaparelli, will be to sniff the Red Planet’s thin, carbon dioxide-rich atmosphere for gases possibly excreted by living organisms, however small or primitive.

Schiaparelli’s purpose, in turn, is to test entry and landing technology for a subsequent rover which will mark the second phase and high point of the ExoMars mission.

After a two-year funding delay, the rover is due for launch in 2020, arriving about six months later to explore the Red Planet and drill into it, in search of extraterrestrial life – past or present.

While any life is unlikely to be found on the barren, radiation-blasted surface, scientists say traces of methane in Mars’ atmosphere may indicate something living underground, most likely single-celled microbes.

Mars has become a graveyard for many a mission seeking to explore a planet that has captured the human imagination for millennia.

Getting a lander on Mars “is a complex mission,” said Thierry Blancquaert, Schiaparelli’s manager.

Since the 1960s, more than half of US, Russian and European attempts to land and operate craft on the Martian surface have failed.

The last time the European Space Agency (ESA) tried, the British-built Beagle 2 disappeared without a trace after separating from the Mars Express mothership in December 2003.

It was finally spotted in a NASA photo in January 2015.

Mars landers must be built to survive a long trip from Earth, then a high-speed, ultra-hot journey through Mars’ carbon dioxide-rich atmosphere.

They require protection against a heat of several thousand degrees Celsius (Fahrenheit), generated by atmospheric friction upon atmospheric entry, extreme braking, and a soft touchdown in terrain where any jagged rocks or craters could spell doom.

Schiaparelli should reach the atmosphere at an altitude of 121 km and a speed of nearly 21,000 kilometers (13,000 miles) per hour.

The extreme ride through Mars’ atmosphere will take 6 minutes.

A discardable “aeroshell” will protect the lander against heat generated by atmospheric drag, while a supersonic parachute and nine thrusters will brake it.

A crushable structure in the lander’s belly is meant to cushion the final impact.

With a 10-minute delay – the time it takes for a message to reach Earth – Schiaparelli will send data on temperature, humidity, density profile and electrical properties – information seen as crucial to plan a safe landing for the much bigger and more expensive rover to follow.

Battery-driven and without solar panels, the lander should last for 2 or 3 days.

Having released its precious charge, the TGO will be commanded overnight Sunday to change course to avoid joining Schiaparelli on the surface, instead entering an elongated and erratic orbit Mars orbit.

It will then start a 12-month process of “aerobraking” – skimming the Martian atmosphere to bleed off energy – to change its orbit into a more regular,  circular one.

Once this is achieved, in early 2018, it will begin its work of analyzing the Mars atmosphere from about 400 km for methane. – Rappler.com