PH to sit as observer in Morocco meeting on Paris deal 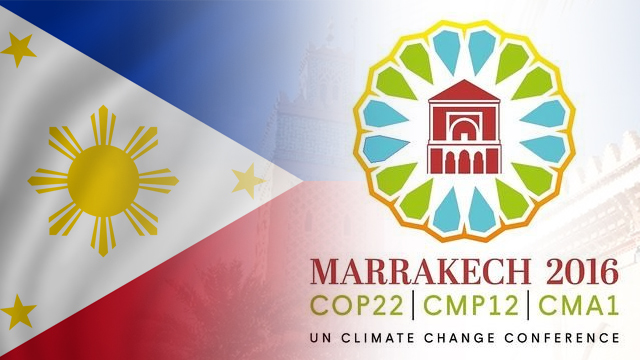 MANILA, Philippines (3rd UPDATE) – After playing an active role during the 2015 climate talks in Paris, the Philippines will sit as an observer in the ceremonial first meeting of the Parties to the Paris Agreement, to be held during the next world climate conference, COP 22, which opens November 7 in Marrakech, Morocco.

“The governing body for the Paris Agreement will convene and meet for the first time at the upcoming Marrakesh COP. Since we are not yet a party to the Agreement, the Philippine delegation sits in this meeting as an observer,” Climate Change Commission Secretary Emmanuel de Guzman told Rappler in a text message.

The Philippines has yet to ratify the Paris Agreement on Climate Change, a landmark international climate pact that is due to enter into force on November 4.

De Guzman is confident, however, that the country will still lead the negotiations on climate change, as it has “participating party” status in other sessions.

“We are participating party in all UNFCCC sessions and committee meetings except for the governing body for the Paris Agreement called CMA where we are observer party,” he said.

“The Philippines is still expected to lead the negotiations on behalf of the Group of 77 and China on the matter of finance, a most important issue for climate vulnerable developing countries,” he added.

In Paris last December 2015, the Philippines, along with other vulnerable countries, fought strongly for a 1.5°C global warming cap.

Countries eventually agreed to keep global temperature rise this century to below 2°C, with the aim of containing it below 1.5ºC, above pre-Industrial Revolution levels, by cutting greenhouse gas emissions.

Meanwhile, during a climate change forum at the Ateneo Law School on Tuesday, October 25, Antonio La Viña revealed he will be taking a break from the negotiations.

La Viña is a veteran of international climate talks and was spokesperson of the Philippine delegation during the Paris climate talks.

“I’ve been doing this for almost 20 years straight; it’s time to take a break. I’d still go, but more as an academic than a negotiator,” he added.

Still, La Viña said he advised the Philippine delegation not to emphasize human rights in the context of climate change, so as not to contradict President Rodrigo Duterte.

“Given that the President has a very different perspective on human rights, it doesn’t make sense to contradict him internationally. If I were in the delegation, I would not talk about human rights at all at this point…. That’s my advice. You have to be consistent with your principal, your President,” he told reporters after the forum.

The language used in the Paris Agreement compelling countries to consider human rights in climate actions came from the Philippine delegation.

De Guzman, who led the negotiations by the Philippines in Paris, said during his speech then that the deal “enshrines human rights as its bedrock principle, including the rights of indigenous peoples, women, and migrants, among others.”

La Viña said there are other areas to focus on aside from human rights, such as historical responsibility, loss and damage, and climate justice.

The President is strong on the last two, he added.

“If the President thinks this way about human rights, how can we as a country then promote human rights in any other sphere? So it’s just logical. You should never go to an international conference and contradict your President. That’s harmful to the country, to the President, to the delegation, to the cause even.”

While Duterte has vowed to “promote, protect, and fulfill” the human rights of Filipinos, his administration’s intensified war on drugs has drawn criticism from international organizations, including United Nations (UN) human rights experts. (READ: IN NUMBERS: The Philippines’ ‘war on drugs)