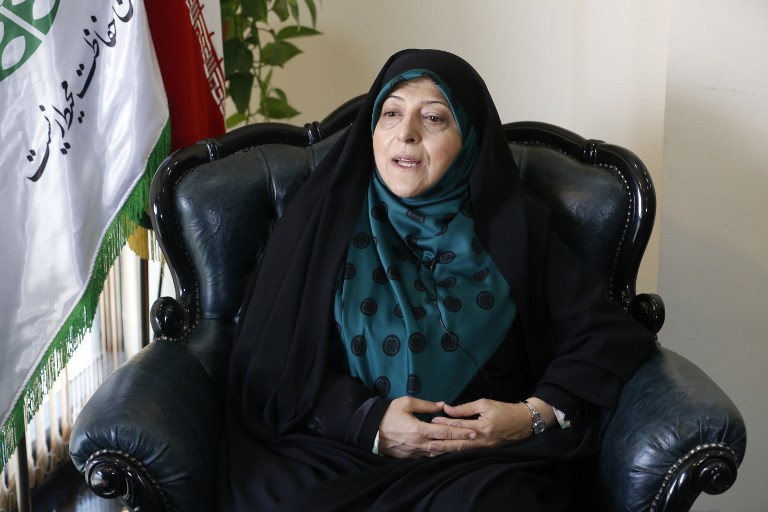 In an exclusive interview, Ebtekar said Iran had already seen temperatures rise by 1.5 degrees over the past 20 years, and urgently needed to work with international partners. (READ: #COP21: Nations agree on historic global climate pact)

“We’re facing the consequences of climate change already in Iran. It’s not a matter of the future, it’s a matter of today,” said Ebtekar, who heads the department of environment and has won multiple global awards for her work.

“We have a severe shortage in underground water reservoirs as well as drying up of our rivers and wetlands. In part this is due to unsustainable practices we had in Iran, but it’s also due to the aftermath of climate change.”

With Iran still largely frozen out of the global banking system because of continuing United States (US) sanctions, she said commitments for a 12% cut in greenhouse gas emissions by 2030 were at risk.

Two-thirds of the planned cuts were “conditional on a full lifting of sanctions because… it requires international collaboration – the exchange not only of experiences but also new technologies is very, very important,” she said.

Although most international sanctions were lifted under last year’s nuclear deal, the US maintained sanctions linked to human rights and Iran’s ballistic missile program – making global banks fear they could be fined by Washington for doing business with the Islamic republic.

‘Reasons to be sceptical’

The continued blockages have made renewing trade with the outside world much tougher than anticipated, and conservatives in Iran have leapt on the issue to make life difficult for moderate President Hassan Rouhani, saying his team was duped by Western negotiators.

“They have reasons to be sceptical,” said Ebtekar, who is one of several Iranian vice presidents. “There are many instances where [the Americans] have not been fulfilling their commitments.”

Ebtekar, 55, gained international fame as spokesperson for the student hostage-takers during the 1979-80 siege of the American embassy in Tehran, but has since become a key figure in the reformist movement, pushing for more open and democratic politics and closer ties with the West.

She insisted the overall outlook was positive: Exports are up and the nuclear accord has shown Iran is “ready for investment, for trade, for working with the global community.”

She pointed to the wealth of opportunities in her own field, saying international firms were lining up to invest in solar energy, water conservation, and waste management, if only full banking relations could be restored.

But the government faces problems at home, too.

Key institutions such as the judiciary and intelligence services are still controlled by hardliners who oppose closer ties with the West.

By imprisoning several dual nationals – Iranians with Western passports – on espionage charges in recent months, they have hurt the government’s attempts to extend its hand to the world.

“The judiciary have their own priorities. We hope [the cases of dual nationals] will be resolved,” said Ebtekar.

‘A sense of hope’

She also acknowledged that the slow recovery of the economy was deeply frustrating, particularly for the country’s young people.

“There are areas where he has faced difficulties and hurdles and pressures, but in most areas, I think people understand that President Rouhani has achieved well, has taken very important steps,” she said.

“He’s been able to bring about an atmosphere of peace… a sense of hope,” she added.

Ebtekar is confident that Rouhani will be re-elected when Iran holds a presidential vote next May, despite fierce opposition from the conservative camp.

The alliance between moderates and reformists that propelled him to power in 2013 “is still very much in place,” she said, and losses by conservatives in recent elections meant parliament was more oriented towards the president than before.

“They have a more pragmatic, a more expert-oriented approach on many issues,” she said.

On whether she might one day consider the top job herself, Ebtekar stuck to the familiar line.

“I never even had a plan to be vice president. My plans were to continue my academic career,” she said of her other job as a doctor of immunology.

“But sometimes destiny has its own play.” – Rappler.com