Nov 17, 2016 3:43 PM PHT
Rappler.com
Facebook Twitter Copy URL
Copied
Environment Secretary Gina Lopez, at the COP22 in Morocco, also says the world does not need to give up economic growth to protect the planet 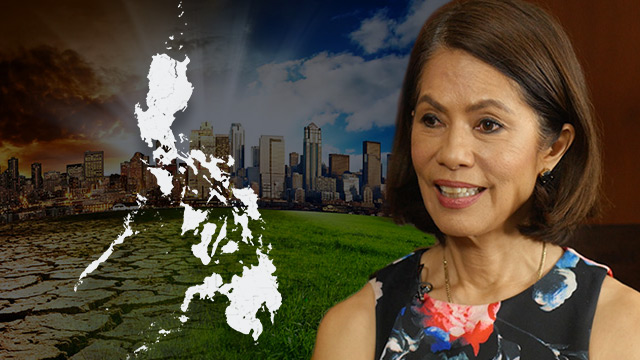 MANILA, Philippines – The Philippines can be a place for scientists and other experts to explore ways for the world to face the effects of a changing climate, Environment Secretary Gina Lopez said at the ongoing United Nations climate change conference in Morocco.

In her brief remarks during the launch of the Low Carbon Monitor report of the UN Development Programme and Climate Analytics at the COP22 on Wednesday, November 16, Lopez touted the Philippines’ biodiversity, highlighting the high number of endemic species found in the archipelago.

This, she said, “is not just the wealth of the Philippines – it is the wealth of all of us together,” which she said will be lost should temperatures breach 1.5ºC.

“The planet simply cannot afford an indecisive ambiguity about what needs to be done,” she said. “The situation is clear – anything more than 1.5 degrees [Celsius] will destroy possibilities for quality of life.”

“Because the Philippines is in the ‘firing line’ of climate change. I propose that we be one venue for scientists as we explore ways for humanity to move forward,” she said.

Lopez added: “I propose a dynamic direction of facilitating climate change models on the ground that give the message – it can be done, and we can do it!”

She said that the Paris Agreement on Climate Change, the landmark 2015 agreement aimed at curbing the rise of global temperatures to below 2ºC (3.6ºF), “can state what the performance indicators of these models should be.”

Lopez said the world does not need to give up economic growth to protect the planet.

“We need to have the courage to change the way we do things. We cannot and must not build an economy based on suffering,” she said.

She said that one measure the Philippines will make will be planting more mangroves, citing that areas with mangroves fared better when 2013’s Super Typhoon Yolanda (Haiyan) struck. “This thrust will not only save our islands but will result in economic zones because of the resultant increase in fish, shrimps, and other sea life.”

“If handled well, our people can get out of poverty,” Lopez said. “In essence adaptation, mitigation, inclusive economic growth does not have to be separate activities or choices. These objectives can all be achieved given the right approach.”

“The Philippines is making a commitment to this exciting future,” she added.

Previously, Lopez’s boss, President Rodrigo Duterte, said he wouldn’t sign the Paris Agreement because of concerns over the Philippines’ need to use fossil fuels for economic growth.

Duterte has since been persuaded by his Cabinet to change his mind, and has said the Philippines will ratify the agreement, which already went into force last November 4 after 55 countries, representing 55% of all greenhouse gas emissions, ratified it. – Rappler.com