Nov 23, 2016 8:13 AM PHT
Agence France-Presse
Facebook Twitter Copy URL
Copied
He said he also wanted to see how much the Paris climate accord 'will cost our companies' and its impact on US competitiveness. 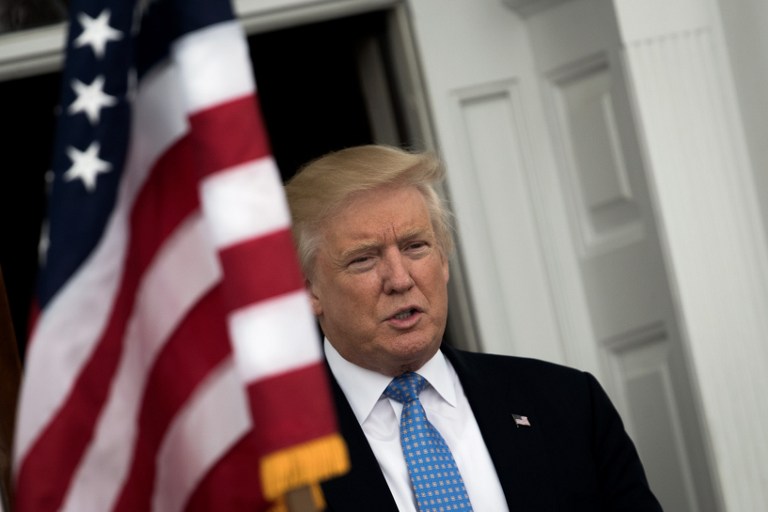 WASHINGTON DC, USA – Donald Trump signaled Tuesday, Novemebr 22, his campaign trail dismissal of the threat of climate change may have been hot air after all, saying he was “open minded” on supporting global accords.

The US president-elect emerged from cabinet-building talks in his Trump Tower headquarters and travelled ten minutes across town to the New York Times to give a wide-ranging interview on his plans.

He disavowed “alt-right” activists who hailed his election as a victory for white supremacy, distanced himself from calls to prosecute Hillary Clinton and defended his global business empire.

And he appeared to soften his pledge to pull the United States out of accords like last year’s COP21 Paris Agreement, that binds countries to national pledges to reduce greenhouse gas emissions.

“I’m looking at it very closely. I have an open mind to it,” he told New York Times executives and journalists over lunch at their headquarters, according to the paper’s own account.

Campaigning ahead of November 8, Trump repeatedly told crowds of rustbelt and southern voters – factory workers, coal miners and oilmen among them – that he would tear up international climate agreements.

As far back as 2012 he had tweeted: “The concept of global warming was created by and for the Chinese in order to make US manufacturing non-competitive.”

Now elected and due to become president on January 20, when he was confronted by Times columnist Thomas Friedman he admitted there may be a link between human industry and global warming.

“I think there is some connectivity. Some, something. It depends on how much,” he said, adding he would nevertheless remain concerned about how much green measures would “cost our companies.”

The New York Times sit down, which followed a reportedly hostile off-the-record clash with TV network chiefs on Monday, November 21, appeared to represent a perhaps temporary truce with the hated media.

Trump regularly – as recently as earlier Tuesday – insults the “failing New York Times” in tweets, but distanced himself from threats to toughen libel laws and engaged cheerfully with the paper.

He also, under repeated questioning, denounced the so-called alt-right, after leaders of the movement met in Washington at the weekend and celebrated his victory with Nazi salutes.

He insisted, somewhat controversially, that his sprawling global business empire does not represent a conflict of interest for a president – at least not according to lawyers he has consulted.

“The law’s totally on my side, the president can’t have a conflict of interest,” he told the paper.

On the bloodshed in Syria, he was vague, saying “we have to end the craziness that’s going on”, and he was gushing in his admiration for President Barack Obama, whom he will replace in White House.

Trump told the paper, despite the aggressive tone of his campaign, he had been honored to meet Obama – and he stepped back from threats to prosecute his defeated rival Clinton.

During the campaign, Trump had accused Clinton of illegally destroying email records to cover up wrongdoing and alleged fraud at her charitable foundation – as his fans chanted “Lock her up.”

Trump was asked by the New York Times whether he stood by a threat, made to Clinton’s face in their second debate, to appoint a special prosecutor to investigate her.

“I think it would be very very divisive for the country,” the president-elect admitted.

In common with his predecessors, the Republican billionaire has been in no hurry to name a cabinet, leaving the reporters gathered under Trump Tower chasing after rumors as he holds court above.

And if the Washington political class was expecting the populist provocateur of the campaign trail to hire a top team from the institutional mainstream, it could well be disappointed.

His picks include a chief strategist who is a self-described “economic nationalist” and a national security adviser who – eased into retirement by Obama – went to dine with Vladimir Putin.

And why would Trump, a 70-year-old tycoon and reality television star whose defiance of political norms led him to win the world’s highest office in his first foray into an election, change now?

Time to give thanks

According to two opinion polls published Tuesday, a majority of voters are optimistic that his efforts to “make America great again” will lead the nation to a brighter future.

According to data from Quinnipiac University, most voters think he should stop tweeting but, by a margin of 59% to 37%, most “are optimistic about the next 4 years with Donald Trump as president.”

A similar CNN/ORC poll found a narrow majority, 53% of voters, found Trump would do a good job.

Later Tuesday, he was due to set off on a family Thanksgiving break at another of his golf resorts, in Mar-a-Lago, Florida. – Rappler.com