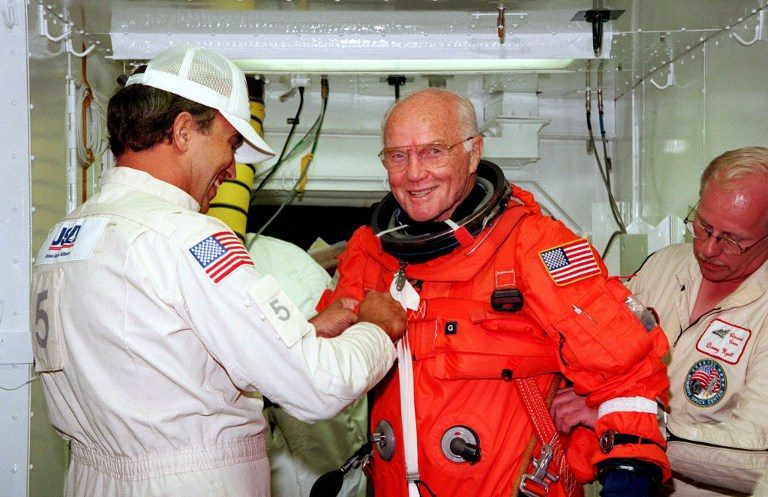 Facebook Twitter Copy URL
Copied
(UPDATED) The US space agency NASA is among the first to pay tribute to the legendary astronaut who went on to serve as a lawmaker for more than two decades, calling him 'a true American hero'

COLUMBUS, USA (UPDATED) – John Glenn, who made history twice as the first American to orbit Earth and the first senior citizen to venture into space, died Thursday, December 8, at the age of 95.

Glenn became a symbol of strength and the nation’s pioneering spirit, drawing admirers from all walks of life over a long career in the military, then NASA, and the US Senate.

He was chosen along with 6 other military pilots as part of the “Original Seven,” the very first class of US astronauts in 1959 whose saga was recounted in the classic movie “The Right Stuff.”

The US space agency NASA was among the first to pay tribute to the legendary astronaut who went on to serve as a lawmaker for more than two decades, calling him “a true American hero.”

Glenn died at the James Cancer Hospital in Columbus, Ohio, according to Hank Wilson, a spokesman for the John Glenn College of Public Affairs. The cause of death was not immediately announced.

“With John’s passing, our nation has lost an icon and Michelle and I have lost a friend,” said President Barack Obama.

“John always had the right stuff, inspiring generations of scientists, engineers and astronauts who will take us to Mars and beyond – not just to visit, but to stay,” he said.

The former astronaut and veteran of two wars had been in declining health, undergoing heart-valve replacement surgery in 2014 and reportedly suffering a stroke, and was hospitalized in Columbus more than a week before he died.

“John is one of the best and bravest men I’ve ever known,” said Secretary of State John Kerry as he paid respects to his friend and former colleague in the Senate, calling him “an inspiration.”

“Though he soared deep into space and to the heights of Capitol Hill, his heart never strayed from his steadfast Ohio roots,” said John Kasich, the governor of Glenn’s midwestern home state, in one of a stream of tributes flooding in for the national hero.

President-elect Donald Trump, who happened to be in Columbus when Glenn’s death was announced, paid his own tribute, telling a rally later in Iowa: “He was a giant among men, and a true American legend.”

The first man to orbit Earth was Russia’s Yuri Gagarin in 1961.

On February 20, 1962, Glenn became the first American to accomplish the same feat, uttering the memorable phrase: “Zero G and I feel fine.”

Glenn’s flight lasted just under 5 hours and he circled the Earth 3 times, as part of NASA’s Mercury project.

Thirty-six years later, on October 29, 1998, he made history again when he returned to space at the age of 77 – becoming the oldest astronaut in space.

It was another shining moment in a career of trailblazing successes spanning decades.

He served in the Pacific during World War II, and later in the Korean War, flying a total of 149 combat missions and downing 3 fighter jets over the Yalu River in the final 9 days of fighting.

In 1957 he made the first nonstop supersonic flight from Los Angeles to New York and became an astronaut two years later.

After his 23-year career in the US military and space program ended in 1965, Glenn entered the Senate as a Democrat. He made two unsuccessful tries for the presidential nomination, in 1984 and 1988.

While in the Senate Glenn was politically progressive and kept a relatively low profile. He specialized in the fight against nuclear weapons proliferation and the disposal of nuclear waste.

He flew his own aircraft, a Beechcraft Baron, between the US capital and his home state of Ohio, boasting about his record time of one hour, 36 minutes from Washington to Dayton.

He regularly passed NASA physicals and pressed the space agency to consider the possibility of sending an older person – such as himself – into space for research, particularly on the effects of weightlessness on the elderly.

In November 2011, then 90 years old, Glenn was awarded the Congressional Gold Medal, with 3 others, the first time the prize was bestowed upon astronauts.

“We came in peace for all mankind,” he said after receiving the honor, before repeating the words he spoke half a century earlier, addressing lawmakers upon returning from his orbital flight.

“As our knowledge of the universe in which we live increases, may God grant us the wisdom and guidance to use it wisely.”

“The last of America’s first astronauts has left us, but propelled by their example we know that our future here on Earth compels us to keep reaching for the heavens,” the president said in his tribute to the late legend.

“On behalf of a grateful nation, Godspeed, John Glenn.” – Rappler.com