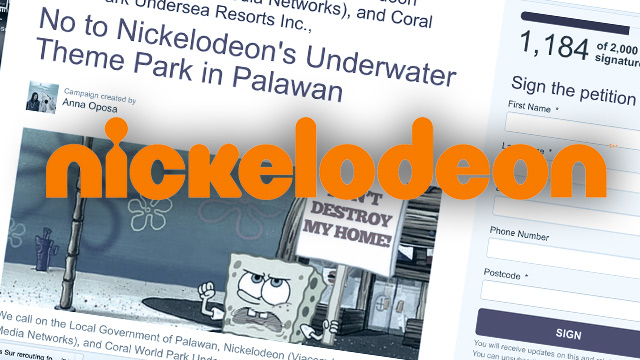 “It is disappointing and heartbreaking that a media company for children – one I too watched growing up – is going to destroy natural resources for current and future generations,” Oposa told Rappler in a text message.

“Why does Coron and the Philippines need artificial attractions? Coron is already so beautiful in its natural state,” she added.

Oposa said they will be asking for copies of the permits and environmental impact assessments (EIA) done for the project.

Save Philippine Seas launched an online petition against the planned undersea park. Oposa also called on the local government of Palawan and the project proponents, Nickelodeon and Coral World Park Undersea Resorts, to junk the plan and invest instead in marine biodiversity-friendly endeavors.

“If you are sincere and serious about marine conservation, the money allocated for the underwater theme park should be invested in marine protected areas, sustainable livelihoods for local communities, and environmental education programs,” the petition continued.

John Vincent Fabello, spokesperson of the Palawan Council for Sustainable Development (PCSD), said they were only informed about the water park project through the media.

The PCSD is a multi-sectoral and intergovernmental body tasked to enforce Republic Act 7611 or the Strategic Environmental Palawan (SEP) Act.

Before starting its construction, Fabello reminded the proponent that it has to secure a SEP clearance from the PCSD, which implements the Environmentally Critical Areas Network (ECAN), a system providing grades of protection and development control over the whole of Palawan.

“We do not categorically say we will accept the project, but as far as we’re concerned we have to look into their documents when they apply for a clearance,” Fabello said.

The environmental body may only issue a SEP clearance to projects which pass its 3 guiding principles – ecological viability, social acceptability, and integrated approach.

“As of this time, we have yet to receive any document or whatsoever, even an application letter,” Fabello said.

On top of a SEP clearance, lawyer Jansen Jontila of Palawan-based Environmental Legal Assistance Center said Nickelodeon also needs to secure an environmental compliance certificate (ECC) from the Department of Environment and Natural Resources (DENR), and free prior and informed consent (FPIC) from the National Commission on Indigenous Peoples (NCIP) if it enters into areas considered ancestral waters.

While Coron boasts incredible diving sites, all isn’t well when it comes to its live coral cover. Only 0.6% of it is in excellent condition, data from the PCSD revealed.

Moreover, Coron’s live coral cover having very good and good conditions are only at 1.0% and 3.2%, respectively. The remainder, meanwhile, falls under fair and poor conditions, with 63.4% and 31.8%.

Fabello said the PCSD will look into the EIA to know the theme park’s proposed exact location and ensure it would not harm coral reefs and other marine ecosystems in the area. – Rappler.com