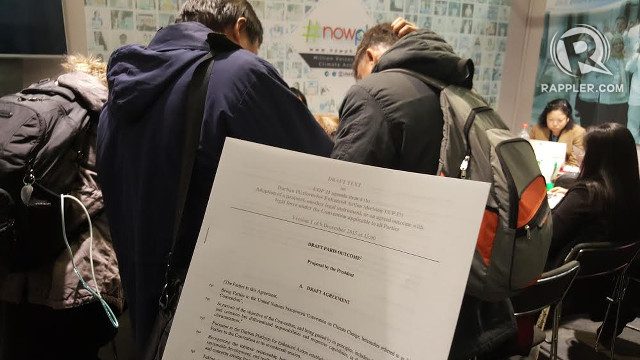 MANILA, Philippines (UPDATED) – The Senate on Tuesday, March 14, gave its concurrence to the ratification of the Paris Agreement on Climate Change, the final step before the Philippines becomes an official signatory to the historic international agreement.

“Wherefore, be it hereby resolved, that the Philippine Senate concur, as it hereby concurs, in the Philippine accession to the Paris Agreement,” said Senate Resolution 320 sponsored by Senator Loren Legarda.

“The Paris Agreement is a testament of solidarity and a call for global climate action. It shows that developing nations and the developed countries could pursue climate action and uphold climate justice together,” Legarda said.

The country will now join 134 other parties who have ratified or acceded to the international treaty, out of 192 countries and the European Union, which are signatories to the pact.

The agreement was adopted during the COP21 climate change conference in Paris, France, in December 2015. (FULL COVERAGE: Climate change)

Other senators also welcomed the decision.

“[It] is a victory for the agriculture, the sector most affected by climate change,” said Senator Cynthia Villar, chair of the committee on agriculture.

“While we still need to be firm about our policies and responses to caring for our planet locally, it also makes perfect sense to lend our voice to the world,” he said.

While expressing support for the deal, Senator Sherwin Gatchalian, chair of the Senate energy committee, demanded wealthy nations to do their part in protecting the environment.

“The wealthy members of the international community must be compelled to do their part in a way commensurate to their share of emissions and their advanced technological capabilities in emissions reduction,” Gatchalian said.

“The developing world must not be left to shoulder an inequitable share of the burden created by the economic growth of industrial giants,” he added.

With this, the country would now have access to the Green Climate Fund (GCF), which seeks to help developing countries limit or reduce greenhouse gas emissions and to help vulnerable societies adapt to the impact of climate change.

Aside from this, Legarda said the country would also gain technical and financial assistance.

“This accord is a manifesto for climate justice. It also allows our country access to international climate finance mechanisms and to acquire support from developed countries for adaptation, mitigation, technology development and transfer, and capacity building,” Legarda said.

The Department of Environment and Natural Resources (DENR) will have to submit a proposal first to the GCF before it can be given access.

Duterte initially expressed his misgivings about the climate deal, but after several Cabinet meetings and with a near-unanimous decision in favor of it, he finally agreed to abide by the agreement.

Duterte has reiterated that he has a problem with the treaty’s lack of sanctions for countries which violate carbon emission restrictions. (READ: Duterte: Climate change real but Paris treaty unfair) – Rappler.com