Erdogan threatens not to ratify Paris climate accord

Jul 9, 2017 8:54 AM PHT
Agence France-Presse
Facebook Twitter Copy URL
Copied
Erdogan: 'After that step taken by America, the position that we adopt is in the direction of not passing it in parliament' 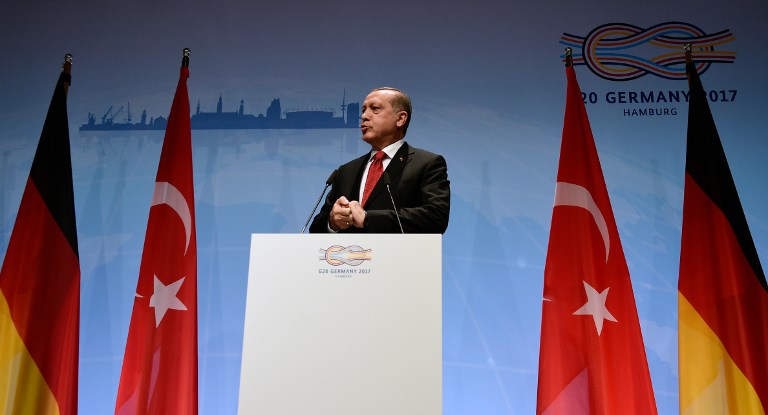 HAMBURG, Germany – Turkey’s President Recep Tayyip Erdogan threatened Saturday, July 8, that his country would not ratify the Paris climate accord, speaking at the end of the G20 summit in Germany.

“After that step taken by America, the position that we adopt is in the direction of not passing it in parliament,” Erdogan said at a press conference in Hamburg.

The summit of the world’s biggest industrialized and developing economies agreed that 19 of its members would stick with the 2015 plan to fight global warming and “took note” of US President Donald Trump’s pullout from the initiative.

But shortly after the mega-summit ended, Erdogan, who met Trump at the event, told a news conference that Turkey was no longer a certain candidate and suggested other members of the “G19” also had doubts.

He said he had clearly told French President Emmanuel Macron and German Chancellor Angela Merkel: “No offense, but we will not pass it in our parliament as long as the promises made to us are not delivered”.

He said former French president Francois Hollande had promised him that Turkey would be classed as a developing and not an industrialized economy – meaning Ankara would receive money from a global climate fund rather than have to pay into it.

He also suggested some other, unidentified, countries had a “problem” with the agreement and said “they are not renewing their full support”. – Rappler.com