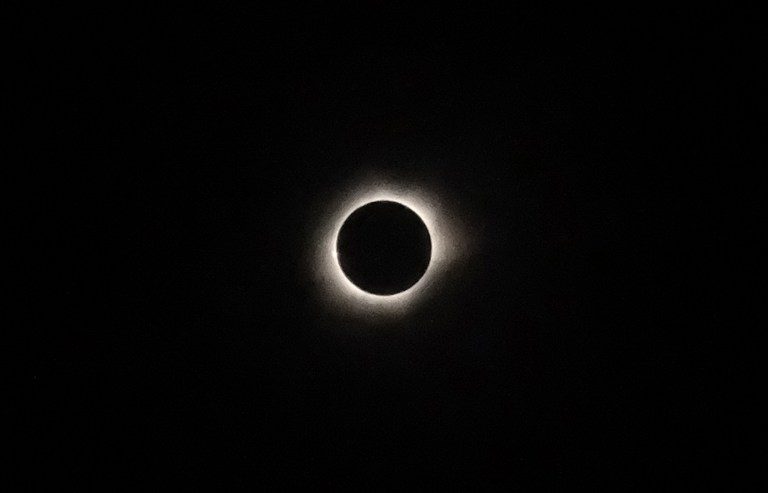 Facebook Twitter Copy URL
Copied
The first total solar eclipse to sweep North America in nearly a century will march across the continent August 21. Watch it here, courtesy of NASA.

MIAMI, USA – The first total solar eclipse to sweep North America in nearly a century will march across the continent Monday, August 21, casting a shadow over millions of people from coast to coast.

The event, coined the “Great American Eclipse,” is inspiring a surge in tourism in the United States, along with sky-high prices for travel to key viewing spots and a rise in scams such as counterfeit solar eclipse glasses. (READ: First eclipse in 99 years to sweep North America)

Celebrations are planned nationwide, including weddings timed to coincide with the eclipse and a live Caribbean cruise ship performance of the 1983 hit Total Eclipse of the Heart by the singer herself, Bonnie Tyler.

The total eclipse, when the Moon fully blocks light from the Sun, will be visible from a 70-mile-wide (113-kilometer) path that carves through 14 US states.

A partial eclipse begins on the northwest coast of the United States shortly after 9 am (1600 GMT).

The total eclipse reaches the western coastline of Oregon at 10:16 am Pacific time (1716 GMT), then forges a diagonal path, exiting over South Carolina in the afternoon.

While the darkest shadows will fall over this “path of totality,” a partial eclipse extends far beyond it, and may be visible as far north as Alberta, Canada and as far south as Brazil, weather permitting.

Even Britain and western France may catch an evening glimpse of a tiny sliver of the eclipse at sunset.

The last time an eclipse crossed from the Pacific to the Atlantic Ocean was on June 8, 1918, when a total eclipse was visible from Washington to Florida.

Watch the eclipse here on Rappler, with the livestream courtesy of NASA, starting 12 noon, August 21 (midnight of Tuesday, August 22, in Manila). – With reports from Agence France-Presse / Rappler.com