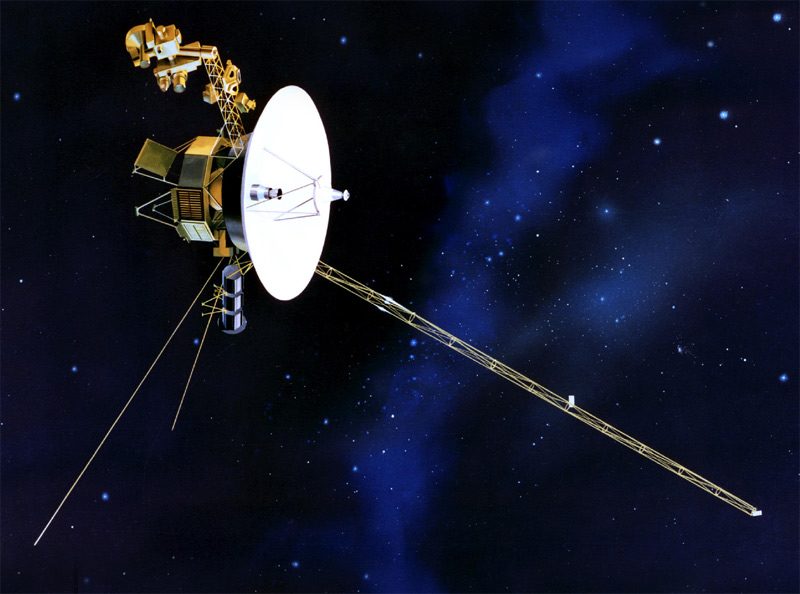 Facebook Twitter Copy URL
Copied
Voyager's main mission is to explore other planets including Jupiter, Uranus and Neptune, but it also carries the story of humanity into deep space

MIAMI, USA – Forty years ago, NASA rocket scientists sought to answer this question by launching the Voyager spacecraft, twin unmanned spaceships that would travel further than any human-made object in history.

They are still traveling.

When Voyager 1 and 2 launched about two weeks apart in 1977 from Cape Canaveral, Florida, scientists knew little about the outer planets in our solar system, and could hardly imagine the scope of their upcoming space odyssey.

“None of us knew, when we launched 40 years ago, that anything would still be working, and continuing on this pioneering journey,” said Voyager project scientist Ed Stone.

Voyager’s main mission was to explore other planets including Jupiter, Uranus and Neptune, but it also carried the story of humanity into deep space.

On board each Voyager is a golden record – and record player – that is built to last one billion years or more and contains key information about humanity and life on planet Earth, in case of an alien encounter.

The sounds include the calls of humpback whales, the Chuck Berry song Johnny B. Goode, Beethoven’s Fifth Symphony, a Japanese shakuhachi (a type of flute), a Pygmy girls’ initiation song, and greetings in 55 languages.

Late American astronomer Carl Sagan, one of the lead scientists involved with the project, also asked his son, Nick, who is now 46, to record his voice on it.

“Hello, from the children of planet Earth,” says the young American boy.

A total of 115 images are encoded in analog form, including the Great Wall of China, telescopes, sunsets, elephants, Jane Goodall with chimps, an airport, a train, a breastfeeding mother, dolphins and images of the human sex organs.

Voyager 2 launched first, on August 20, 1977, followed by Voyager 1 on September 5 on a faster, shorter trajectory that would eventually take it into the lead.

The timing of the mission took advantage of a rare planetary alignment that only happens every 175 years, along with “gravity-assist” boosts from passing by planets that minimized the fuel needed.

But Voyager faced many challenges from the start, from tight budgets to the limits of modern technology in the 1970s.

One project scientist famously recalled wrapping Voyager’s cables in aluminum foil – the store-bought kind for kitchen use – to protect the spacecraft from frying in heavy radiation.

Then-president Richard Nixon wanted to contain the mission to a two-planet flyby and a 5-year life, but scientists building Voyager planned for a longer mission just in case.

The cosmic duo went on to unveil planetary features unlike anything ever seen, including details about the surface of Jupiter with its raging storm the size of two Earths, known as the Great Red Spot.

“These were, at that point, better pictures than any ground-based telescopes could provide,” said Alan Cummings, a senior research scientist at Caltech who worked on the project beginning in 1973.

Saturn’s moon, Titan, turned out to have the most Earth-like atmosphere in the solar system, while Neptune’s moon Triton was revealed to be spewing icy geysers.

Astronomy textbooks were rewritten on a wide scale, thanks to Voyager, which zoomed past Jupiter, Saturn, Neptune and Uranus and “revolutionized the science of planetary astronomy,” NASA said  in an online remembrance of the famed mission.

When Voyager had no more planets to be encountered on its trajectory, Carl Sagan pressed to have its cameras turn back toward Earth for a final snap of the planet that sent it.

From 4 billion miles (6.4 billion kilometers) away, the images were taken on Valentine’s Day, 1990.

The Earth appeared as tiny as a speck of dust in a sunbeam, less than a single pixel in the vastness of space.

“I think this perspective underscores our responsibility to preserve and cherish that blue dot, the only home we have,” Sagan told a press conference at the time.

Where are they now?

Voyager 1 has traveled father than any human-made spacecraft, and made it to interstellar space, about 13 billion miles away from Earth, in August 2012.

Voyager 2 is on its way there too, and is the only spacecraft to have flown by all 4 outer planets in our solar system.

The plutonium-powered spaceships will continue until they finally run out of fuel, and will then orbit in the center of the Milky Way galaxy.

Cummings said the cameras stopped working a long time ago, but about 5 instruments still collect data.

Scientists still hear from the Voyager spacecraft daily, and expect to get data for about another decade.

“It is still discovering new things because it is going where nothing has been before,” said Stone. – Rappler.com