Sep 9, 2017 11:49 AM PHT
Katerina Francisco
Facebook Twitter Copy URL
Copied
Garbage remains a main concern in the city's flood mitigation efforts, but the successful waste management initiative of one barangay may serve as a model 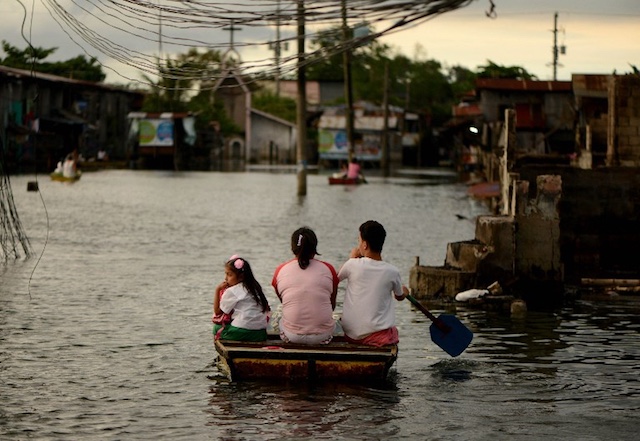 MANILA, Philippines – For a long time, Malabon City has been associated with floods. When the rainy season arrives and heavy rains pound the metro, Malabon residents anticipate waking up to floodwaters outside their homes.

The city is so vulnerable to flooding that in some parts, particularly the Artex Compound in Barangay Panghulo, floodwaters have not receded for over a decade.

The city’s physical features and geographic placement make it particularly prone to flooding. Located north of Manila, Malabon is part of the sub-region called CAMANAVA (Caloocan, Malabon, Navotas, and Valenzuela cities), which all face the common problem of flooding due to interconnected rivers.

Malabon has a flat, low-lying terrain, making it more susceptible to floods, especially when the heavily silted Tullahan River overflows, triggering deep floods that reach the densely populated areas of the city, especially when accompanied by heavy rainfall.

What worsens the flooding are the heaps of garbage that clog drainage systems and pumping stations. While the city government has struggled with educating its residents on the impact of improper waste management on heavy flooding, one barangay’s success story may serve as a lesson on what strong community involvement can do.

Of Malabon’s 21 barangays, 18 barangays are at risk of flooding. The city itself is on the list of flood-prone areas in the metro, and it was listed as one of 7 Philippine cities that will be most exposed to one-meter sea-level rise, according to the Asian Development Bank. 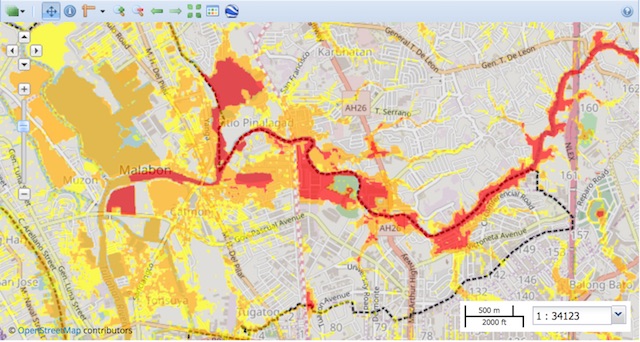 The city government has tried different tacks to ease the flooding problem, from building river walls to pumping stations. Malabon currently has 43 operational pumping stations and 102 operational flood gates, complemented by the regular declogging of canals and desilting of rivers and creeks.

In January 2013, the city council pushed an ordinance to ban plastic packaging, citing how plastic wastes end up clogging the drainage systems. The ordinance would compel business establishments not to use plastic bags or syrofoam containers for dry goods, and also prohibit the improper disposal of plastic waste.

But several months later, the ordinance was withdrawn to allow consultations with various stakeholders. Malabon, though, isn’t the only city in Metro Manila not adopting the no-plastic ordinance. The local governments in CAMANAVA aren’t hopping onboard too, because of the plastic manufacturers there and their proximity to a fishport that require plastic packaging.

Malabon Mayor Antolin “Len” Oreta III told Rappler in an interview that discussions on the ordinance have reached a deadlock, as some are pushing for a total ban on plastics, while others are arguing for the use of biodegradable plastic instead.

In the absence of an ordinance, Oreta said some businesses are adopting a no-plastic policy on their own: fastfood chains, for instance, are using cardboard boxes and paper bags instead of styrofoam containers.

But for the mayor, the real problem lies in where the people throw their plastic waste. Garbage and improper waste disposal remains an issue in the city, clogging up pumping stations.

“What happens is, because people still lack discipline, they throw their trash in the canals and in the river. The garbage clogs up pumping stations, so we’re really trying to get the barangay chairman and community leaders involved in throwing trash in the proper places,” Oreta said in a mix of English and Filipino. 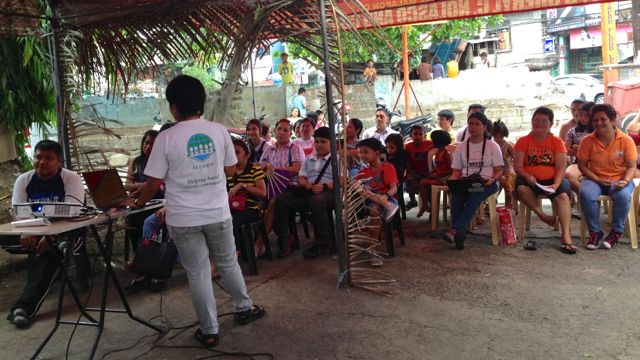 One barangay that has successfully begun this practice is Barangay Potrero, the 2nd most populated barangay in the city with about 12,000 households.

It’s one of the barangays vulnerable to heavy flooding, with some 3,286 families at high risk to floods that can go as deep 10 feet, according to non-governmental organization ACCORD.

In 2015, ACCORD, Partners for Resilience, and the Mother Earth Foundation worked together to teach the barangay’s residents on proper waste management  and reducing the impact of heavy flooding in the area.

The project ties up Mother Earth Foundation’s technical knowledge on waste segregation with the barangay’s own disaster risk efforts.

“The project started not with solid waste management, but with the barangay assessing the risks and causes behind flooding in their area,” said Erica Bucog, program support director of ACCORD.

(While barangay officials were studying their situation, they realized that one of the main factors why they always experience flooding was because of garbage. That’s how they were convinced that they have to do something about waste management in their barangay.)

The project involved a solid waste management committee in the barangay, which is in charge of monitoring the compliance of households. Village leaders are also tasked with cascading information campaigns to their constituents.

These waste warriors and eco-police come from members of the barangay itself. They conduct information drives, going house-to-house and getting their own neighbors to comply with the program.

The waste management program also has a financial benefit to the barangay, where there are many ambulant vendors or construction workers, and women working as household help and sari-sari store owners.

Recyclable waste, which comprises about 15% of the trash in Potrero, is brought to and sold at the barangay’s materials recovery facility. The barangay is also exploring other ways of reusing trash, such as using eco-bricks, or plastic bottles filled with non-biodegradable material that can be used as building blocks.

By recycling or turning trash into compost, Potrero stands to save millions in landfill tipping fees.

As part of the initiative, households and businesses are required to segregate their trash at home. Otherwise, garbage collectors won’t pick up the trash.

If they consistently fail to segregate, non-compliant households can face a fine of P500, and erring establishments,  P3,000.

It took a while for the residents to take to the project, said Ansherina Grace Talavera, ACCORD Program Director.

She recalled the struggle of barangay officials and the NGOs to organize community meetings on waste segregation, with only a handful of people turning up. There were also instances when residents would get angry at garbage collectors for refusing to pick up unsegregated trash. Some would even chase after the eco-warriors going house-to-house.

Getting the community itself to identify the cause of the problems in their barangay – and thinking up a possible solution for it – was key to getting their cooperation when it came to practicing and implementing waste segregation.

(There should be people in the barangay who are themselves advocates, because it won’t work if only those from the outside try to implement it. There should be champions of the project at the local level. The community will understand how important it is, so that they themselves would formulate the plan.)

Talavera also said that much of the work requires persistence, because a change in people’s behavior doesn’t happen overnight.

It took at least two years before the ACCORD team saw some gains, she said. And these small wins are already a confidence booster to the barangay officials.

(Once the people understand the purpose of the project, they take action. Even if there’s extra effort on their part, there’s a change in their practices. This is really important. It’s not just because you tell them to do something, you’d expect that they act on it. You have to go through a long process.)

While the waste management project hasn’t wholly eliminated heavy flooding in Potrero, residents can see an improvement: floodwaters no longer have heaps of garbage floating around that clog drainage systems.

While Potrero is setting a standard for other barangays to follow, it also highlights the need to instill discipline among Malabon’s citizens.

For Oreta, it’s already a challenge in other areas to get residents to throw their garbage at the right place and time, let alone expect them to segregate their trash.

(There should be discipline, and people should work together, and each one should be held accountable for their garbage. One should be able to tell someone who is littering, ‘Why are you littering there? We’re going to be affected too, all of us are neighbors.)

The mayor lamented that there seems to be a lack of understanding that the waste people throw eventually affect them in the form of destructive and damaging floods. Oreta pointed out that improper waste disposal can also lead to a host of respiratory problems, not to mention hampering efforts for disaster risk response.

Oreta recounted how this worrying lack of concern and discipline was reflected in how one person acted towards a street sweeper. He recalled that the person told the street sweeper that he should be lucky he had a job because he was throwing away trash in the street for the worker to clean up.

But instilling discipline among residents isn’t as easy – nor as effective – as simply conducting information drives and telling people to comply.

It takes effort, persistence, and deep diving into the community itself – a process that Talavera said can take years, in the case of ACCORD’s experience in Potrero.

(The other barangays encounter difficulties because they expect instant results….It’s hard to expect the same results when there is not the same amount of input or organizing efforts.)

Talavera also noted that barangay officials may want to do their jobs effectively, but may lack the knowledge or skills to do so. And this, she said, is where NGOs and the local government can step in, by providing workshops and training.

Aside from conducting information drives, the city government is trying different approaches to drive the message home.

They’re now incorporating lessons about the environment and the negative impact of garbage in daycare lessons.

The idea behind it is that parents and adults will feel ashamed and will be likely to comply if their children tell them off for littering.

It was an idea inspired by Oreta’s own nephew, who was based in Singapore. The 3-year-old cried after seeing his nanny use a plastic straw, telling her that plastic straws are bad. The nanny eventually stopped using one.

“That’s why we’re trying the daycare….How can you say no to your child?” said Mayor Oreta’s wife, Melissa Oreta, Malabon’s nutrition action officer.

Aside from this, the city plans to launch a cleanest barangay contest, offering a grand prize of P100,000 to the barangay who can keep their surroundings clean for one entire year.

The city government hopes to tap into that bayanihan spirit, and encourage citizens to get involved with their community.

Malabon’s approach may be incentives-based for now, but city officials are hoping that once residents see how these practices benefit and improve their lives, the good practices will stick even without the incentives. 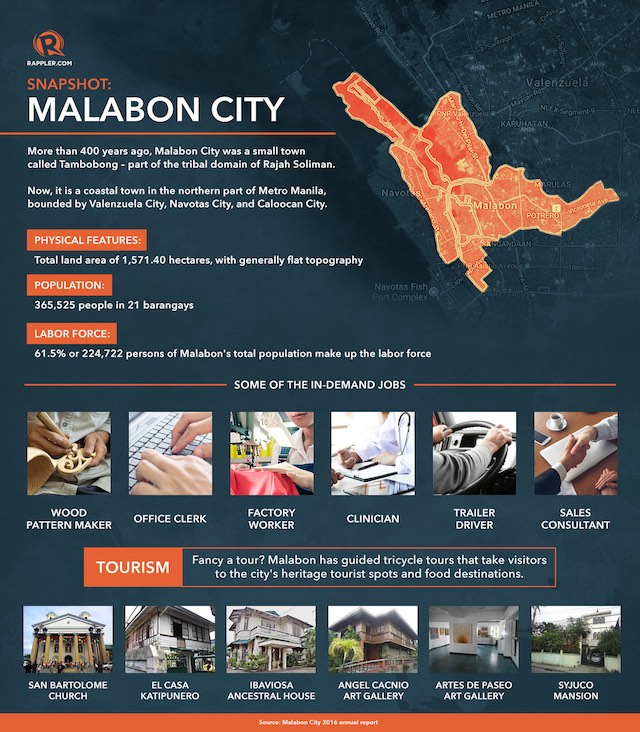