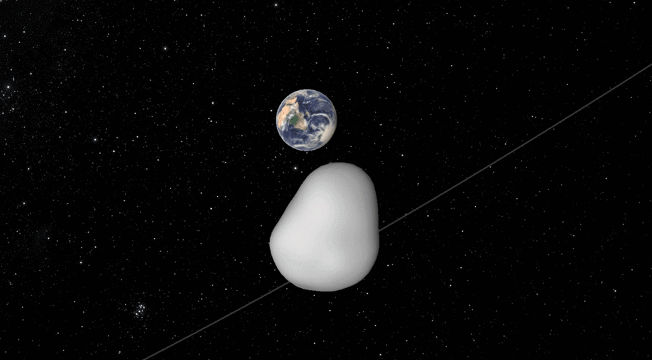 PARIS, France – A house-size asteroid will give Earth a near-miss Thursday, October 12, passing harmlessly inside the Moon’s orbit while giving experts a rare chance to rehearse for a real-life strike threat.

That represents about an eighth of the distance between the Earth and the Moon.

NASA’s Mike Kelley, who leads the exercise to spot, track and intimately probe the transient visitor, insisted there was “no danger. Not even for satellites”.

“We’ve now been observing TC4 for two months, so we have very accurate position information on it, which in turn allows very precise calculations of its orbit,” which will not cross that of Earth nor its satellites, he told AFP.

As its name suggests, the object was first spotted 5 years ago when it called on Earth at about double Thursday’s projected distance, before disappearing from view.

It is 15 to 30 metres (50 to 100 feet) wide – about the size of the meteoroid that exploded in the atmosphere over Chelyabinsk in central Russia in 2013 with 30 times the kinetic energy of the atomic bomb dropped on Hiroshima.

The resulting shockwave blew out the windows of nearly 5,000 buildings and injured more than 1,200 people.

While the Chelyabinsk event caught everyone unawares, TC4 is one of thousands of space rocks whose whereabouts are known.

On its 609-day loop around the Sun, TC4 will return to Earth in 2050 and 2079, according to Ruediger Jehn of the European Space Agency’s Near-Earth Object programme in the Netherlands.

With a one-in-750 chance of hitting the planet then, TC4 is listed at number 13 on the “risk list” of objects posing even the remotest impact risk.

“We need to make very precise observations to be able to better predict the return in the year 2050,” Jehn said.

Flybys like this one are actually quite common – about 3 objects similar in size to TC4 graze past at a similar distance every year.

What makes TC4 special is that it has been chosen to test the global asteroid pre-warning system, fed by a network of observatories, universities and labs around the world.

The asteroid’s close approach will allow teams to evaluate how accurate they were in predicting its orbit and size, while using telescopes to learn more about its composition.

“For us this is a test case,” said Jehn’s colleague Detlef Koschny. “We are practicing for the real serious case.”

Many scientists believe the Earth will once again be hit by a space rock of the size that wiped out the dinosaurs, though nobody knows when.

And even if they become better at predicting a strike, there is very little to be done about it, for now.

Futuristic projects mooted to deflect or destroy incoming space rocks have come to nought so far, and the only strategy would be to evacuate people in zones at risk.

TC4 will make its closest approach to Earth just before 0541 GMT on Thursday, at a point south of Australia, according to ESA and NASA.

It will not be visible to the naked eye nor with regular binoculars, “but it can be seen in the night of 11-12 October until about 4.00 am from European observatories,” Jehn said. – Rappler.com