Oct 12, 2017 8:25 AM PHT
Agence France-Presse
Facebook Twitter Copy URL
Copied
The Chicago-based John D. and Catherine T. MacArthur Foundation gives out the annual award to 'people on the precipice,' where the money will advance their goals 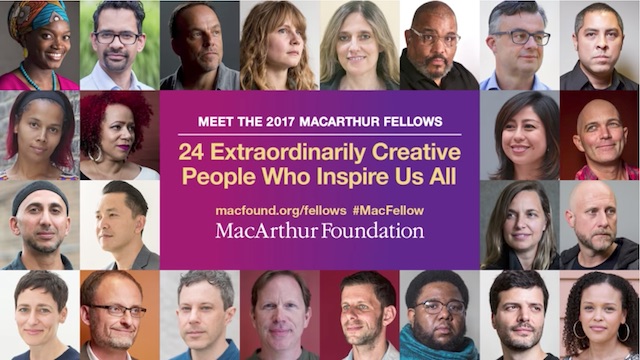 CHICAGO, USA – The winners of this year’s MacArthur “genius” grants were announced Wednesday, October 11, with 24 Americans from various disciplines ranging from the arts to the sciences being awarded money to continue their work.

The winners included a painter, a historian, an anthropologist and a journalist – each receiving $625,000 in total over 5 years to use as they wish.

The Chicago-based John D. and Catherine T. MacArthur Foundation gives out the annual award – informally known as the “genius” grant –  to “people on the precipice,” where the money will advance their goals, foundation managing director Cecilia Conrad told The New York Times.

The awards are shrouded in secrecy. There is no application process. Fellows are chosen by a secret group of experts in various fields ranging from the arts, sciences and humanities.

The foundation said the winners were “creative people who inspire us all.”

Nigerian-born painter Njideka Akunyili Crosby, who lives in Los Angeles, won for her works that often reference her heritage while “visualizing the complexities of globalization and transnational identity,” the foundation said.

The foundation also awarded grants for work that reveals the complexities of human migration and societal challenges.

Sunil Amrith, a professor of history at Harvard University, focuses on the impacts of historical migration in shaping present-day South and Southeast Asia.

University of Michigan anthropology professor Jason De Leon is studying the flashpoint topic of undocumented migration across the US-Mexico border, “bringing to light the lives and deaths of clandestine migrants,” the foundation said.

Investigative journalist Nikole Hannah-Jones was awarded for “chronicling the demise of racial integration efforts and persistence of segregation in American society.”

Other awardees include Los Angeles-based opera director Yuval Sharon, who is bringing the traditional art form to non-traditional spaces, such as a train station.