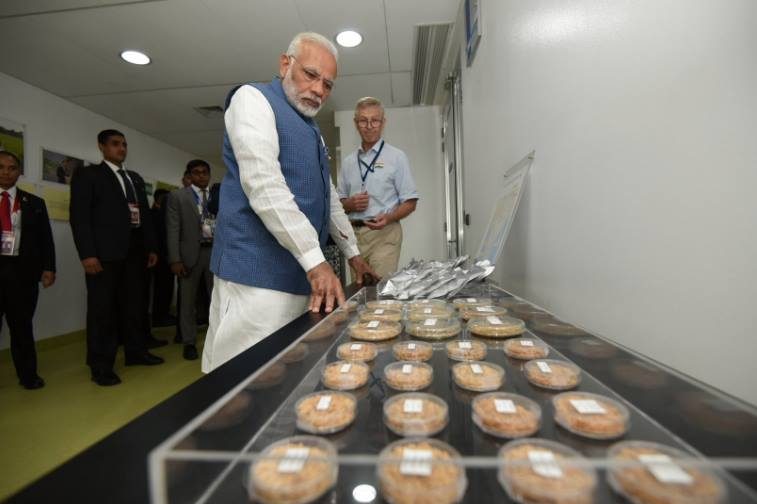 Modi is in the Philippines for the 31st Association of Southeast Asian Nations (ASEAN) Summit and Related Summits, where India is a dialogue partner.

IRRI has an office in India, and 16 other countries in Asia and Africa.

Developing countries such as the Philippines and India deal with massive flooding each year. Most of the world’s rice is grown in Asia but according to IRRI, 20 million hectares of rice fields in the region are prone to flooding.

“In India and Bangladesh alone, more than 5 million hectares of rice fields are flooded during most of the planting seasons,” IRRI said in a statement.

Saw a detailed exhibition on rice varieties and the impressive work done by IRRI with women farming cooperatives. pic.twitter.com/zoqW86brF2

The Philippine laboratory will conduct the research, and the data will be forwarded to the Indian office for testing. IRRI’s South Asia Regional Center is in Varanasi, Uttar Pradesh.

On Twitter, Modi said he met with Indian scientists and researchers who work at IRRI. (READ: World’s first global standard for sustainable rice launched in PH)

“India is also involved in helping IRRI in strategic planning, helping decide key goals, and working to overcome hunger as well as poverty,” he said.

IRRI will also work with the Indian Center for Agriculture Research to have local farmers test the innovation.

“This ensures innovations are tailored to farmers’ needs and quickly adopted – creating a responsive, real-time laboratory dedicated to the development of high quality, profitable rice varieties for those in need,” IRRI said.

“The establishment of research facilities and Centers of Excellence such as this one and the one in Varanasi is a testament to the Indian government’s commitment to South-South collaboration as a key mechanism for meeting food security needs and improving the livelihoods and welfare of farmers – the farmers who play a critical role in transforming the global rice sector into an efficient, highly productive economic driver of the region,” Morell said. – Rappler.com