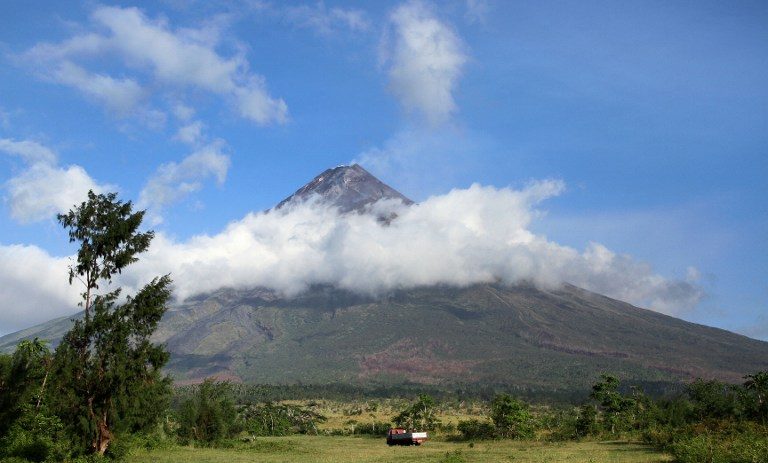 MANILA, Philippines – Residents around Mayon Volcano are advised to be more vigilant, as government scientists raise the alert level for the volcano early Sunday, January 14.

The volcano’s alert status has now been upgraded to Alert Level 2, meaning “increasing unrest,” after a steam-driven eruption that caused ash falls in areas of Albay on Saturday, January 13.

The phreatic eruption “propelled a grayish steam and ash plume” Saturday afternoon, and lasted for around 1 hour and 47 minutes, the Philippine Institute of Volcanology and Seismology (Phivolcs) said in its bulletin past midnight Sunday.

Traces of ash fell in several barangays in Camalig and Guinobatan towns, while a “sulfuric odor” was noted by people in Camalig town proper, the bulletin said.

Phivolcs also noted that a “faint crater glow” was observed at around 10:16 pm on Saturday.

The raising of the alert level means the current volcanic activity could be of “magmatic origin, which could lead to more phreatic eruptions or eventually to hazardous magmatic eruptions.”

With the raising of the alert level, people are advised against entering the 6-kilometer permanent danger zone, and people living in the volcano’s southwest and west sides should prepare for possible ash fall events.

Aircraft are also advised not to fly too close to the summit.

The volcano has seen a “slight swelling” since October and November 2017, Phivolcs said. – Rappler.com