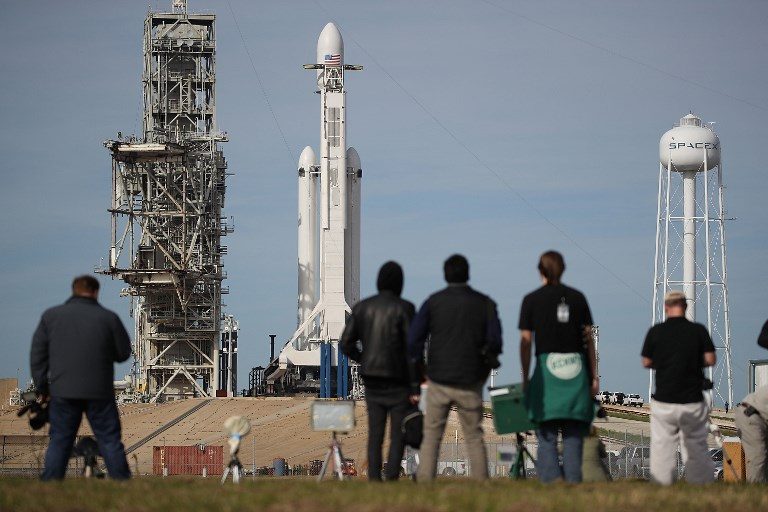 MIAMI, USA – SpaceX is poised for the first test launch on Tuesday, February 6, of its Falcon Heavy, which aims to become the world’s most powerful rocket in operation, capable of reaching the Moon or Mars some day.

The launch, scheduled for 1:30 pm (1830 GMT; 2:30 am of February 7, Manila time) from Cape Canaveral, Florida, is the most ambitious yet for SpaceX, and has been hailed by industry experts as a game-changer because of its potential to propel the California-based company to the very forefront of the modern day space race.

“NASA may decide to use it (the Falcon Heavy) as a way of fast-tracking its plans to get to the Moon and Mars,” Erik Seedhouse, assistant professor of applied aviation sciences at Embry-Riddle Aeronautical University, told AFP.

Tuesday’s launch is a “huge deal, even for a spaceflight company that routinely accomplishes huge deals,” said Jason Davis of the Planetary Society, describing the Falcon Heavy as “mythical.”

No people are on board, just a mannequin wearing a futuristic spacesuit, strapped into CEO Elon Musk’s very own cherry red Tesla car.

“Starman in a Red Roadster,” Musk posted on Instagram Monday, showing the rocket’s payload on a pedestal, aiming skyward.

Musk has also said David Bowie’s hit “Space Oddity” would play in the vehicle during the launch.

An animated video released by SpaceX to preview the launch showed all three rocket boosters returning to upright landings on Earth, while the car and mannequin emerged from the protective nose cone and sailed into orbit.

The car is destined for an elliptical orbit around the Sun, taking it into the vicinity of Mars.

“At times, it will come extremely close to Mars, and there is a tiny, tiny chance that it will hit Mars,” Musk told reporters. “Extremely tiny.”

Musk reiterated his warning that the maiden launch of the Falcon Heavy — a project he first unveiled in 2011 — may indeed fail. It may even explode on the launchpad.

“I would consider it a win if it just clears the pad and doesn’t blow the pad to smithereens,” he said.

There is also a chance the Tesla might not make it beyond low-Earth orbit. First it has to go through the violent Van Allen belt where it will be pummeled by charged particles for about six hours.

“It is going to get whacked pretty hard,” Musk said.

Even if there is a disaster Tuesday, Seedhouse said it is unlikely to harm the reputation of SpaceX – already a top cargo supplier to the International Space Station under a $1.6 billion contract with NASA and busy with a steady stream of satellite clients and government payloads.

“Last year, they had more launches than any other country in the world – never mind any other company,” Seedhouse said.

“Every failure they have had they have bounced straight back.”

Most powerful in operation

The Falcon Heavy is essentially three Falcon 9 rockets in one, with a total of 27 Merlin engines.

These engines “together generate more than 5 million pounds of thrust at liftoff, equal to approximately eighteen 747 aircraft,” said SpaceX.

Although SpaceX has said the Falcon Heavy was “designed from the outset to carry humans into space and restores the possibility of flying missions with crew to the Moon or Mars,” the plans for it to one day carry people appear to have changed.

Musk said another massive rocket under development, called BFR – short for “Big Fucking Rocket” – may be the one to transport crew, while Falcon Heavy may be reserved for equipment.

In any case, when the Falcon Heavy lifts off, “it will be the most powerful operational rocket in the world by a factor of two,” SpaceX said.

The Falcon Heavy is designed to lift more than twice the payload of the next closest operational vehicle, the Delta IV Heavy, at a far lower cost.

The Delta IV Heavy costs about $350 million per launch, according to United Launch Alliance.

“That is way, way, way below anything else in the government launch industry,” Seedhouse said.

Previous rockets that are no longer in commission have been more powerful than the Falcon Heavy — including the Saturn V moon rocket, last flown in 1973, which delivered more payload to orbit.

The Soviet era Energia, which flew twice in 1987 and 1988, was also more powerful than the Falcon Heavy.

The United States has been unable to send its own astronauts to space since 2011, when the 30-year shuttle program ended, leaving the world’s astronauts to rely on Russian Soyuz rockets for transport to the International Space Station.

NASA is building its own massive rocket, called the Space Launch System, but costs are high and the project is years away from completion.

Musk said he was feeling “giddy” about Tuesday’s launch, and was not feeling the dread and anxiety he usually experiences ahead of time.

“It is guaranteed to be exciting, one way or another. Either it is going to be an exciting success or an exciting failure,” he told reporters.