Earth Hour 2018: Lights out for world landmarks in nod to nature 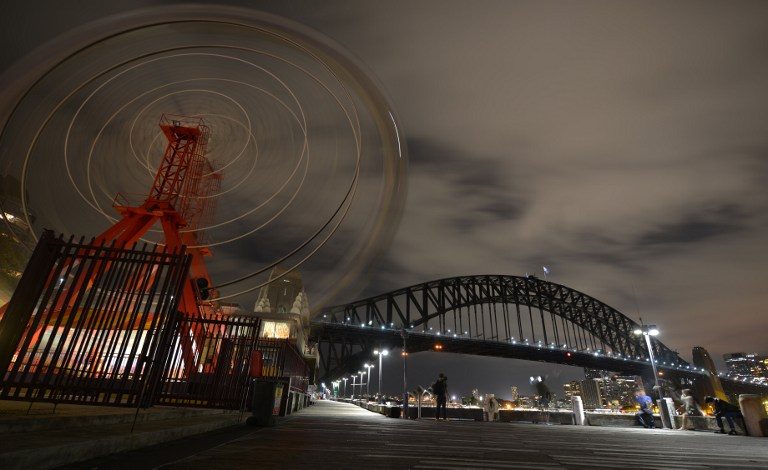 Facebook Twitter Copy URL
Copied
The aim of this year's Earth Hour is building support for biodiversity by focusing on forests, oceans and wildlife conservation

PARIS, France – World landmarks from the Eiffel Tower to the Empire State Building will go dark this weekend to support the fight against climate change and highlight the dangers mankind poses to nature.

The 11th edition of Earth Hour, an annual bid to raise awareness about climate change caused by burning fossil fuels, will see iconic structures cut the lights at a time when global temperatures are the highest on record.

“Climate change is a major threat to the stability of the planet and our livelihood and society, but climate change is only a component of the broader ecological crisis,” Marco Lambertini, general secretary of Earth Hour organizers WWF, told Agence France-Presse.

This year’s aim is building support for biodiversity by focusing on forests, oceans and wildlife conservation.

“Biodiversity and climate change are two sides of the same coin of the ecological crisis we are facing,” said Lambertini.

In Australia, where Earth Hour was first held, the WWF will raise awareness on the 4 so-called “hero species” – green turtles, koalas, rock wallabies and penguins – while the Sydney Opera House and Harbour Bridge will join the blackout.

In South Korea, where coal dust pollution causes more than 14,000 premature deaths each year, activists will be encouraged to make their own masks to push the government towards stronger air controls.

And in Singapore, where the average person goes through 13 plastic bags each day, WWF plans a plastic-free festival to raise awareness on waste.

Divers in Greece will meanwhile undertake a unique underwater marathon in a lake near Athens that contains several threatened species.

And in the United States, which last year under President Donald Trump sensationally announced he would pull out of the Paris climate accord, the WWF said it would appeal to younger people to call on the government to support the fight against global warming.

“People are sad about nature loss and animal extinction… actually we need to be worried about it. Being sad is not enough.”

Apart from the striking gesture of some of the planet’s most iconic structures going dark, Earth Hour has achieved tangible environmental feats since its first edition in 2007, including a ban on plastics in the Galapagos Islands and planting 17 million trees in Kazakhstan.

Earth Hour events begin on Saturday, March 24, in Sydney at 8:30 pm (1130 GMT) and will follow the path of sunset across the globe. – Rappler.com