The challenges of going zero waste in the Philippines 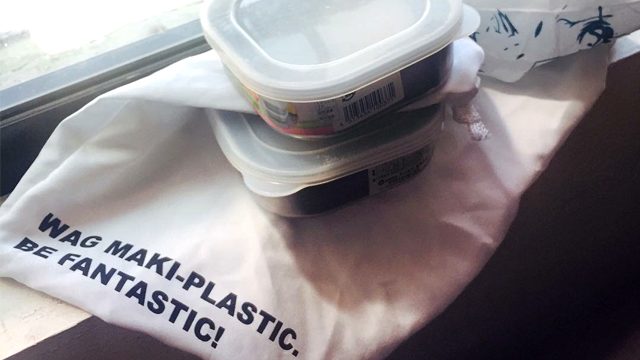 Facebook Twitter Copy URL
Copied
The zero waste movement, or the lifestyle of recycling and using natural products, is growing in the Philippines. There are no laws, however, that incentivizes the practice.

MANILA, Philippines – Lenn Tejada Katindig started going zero waste two years ago, after her daughter saw a photo of a sea turtle with a straw stuck up to its nose.

“We felt the pain it went through and I felt ashamed that I know I somehow contributed to the plastic waste. My daughter loves the beach so much, we had to do something or she’ll end up seeing a beach full of trash,” Katindig said.

The zero waste movement, or the lifestyle of recycling and using natural products, is growing in the Philippines.

Katindig is part of the Buhay Zero-Waste, a Facebook group with almost 14,000 members who post mostly about ways to sustain an eco-friendly lifestyle.

This way of life takes a lot of effort given the ubiquity of plastics and styrofoam. “I always have to plan my everyday life. For example, Saturday is my grocery day, so I prepare what I need for that day. Or I’m going to the mall, I always make sure I have my mess kit with me just in case I want to eat or drink,” Katindig said.

Some may find it even more difficult to start going zero waste, given that there are no laws in the country that incentivizes the practice. There are also no laws that explicitly regulate or ban the use of plastics.

Senate Bill 430 or the Plastic Bags Regulation Act filed by Senator Loren Legarda “aims to strictly regulate the production, importation, sale, and use of plastic bags.”

Under the bill, a store will be prohibited from providing consumers with plastic bags for the purpose of carrying purchased products.

Only plastic bags that are used to contain fresh fish, meat and poultry products, and primary plastic packaging used to pre-pack food items and in the manufacturing of finished products for sale in the general market are excluded from the prohibitions under the bill.

Legarda earlier proposed a similar bill way back in 2011, but it failed to materialize into law.

Senator Cynthia Villar, chair of the Senate committee on environment and natural resources, said in April 2017 that “despite the enactment of Republic 9003 or the Ecological Solid Waste Management Act since 2001, the Philippines is among the countries with the most number of plastic wastes being dumped into the seas.”

Meanwhile at the House of Representatives, efforts have also hit several roadblocks.

For instance, Nueva Ecija 1st District Representative Estrellita Suansing, who is also chair of the House ecology committee, said in 2016 that “it is very clear that nobody endorsed the total ban proposal, everyone preferred a regulation.” Suansing has already filed a similar bill like Legarda’s, but the measure failed to reach the bicameral level.

There are also struggles at the local level.

For instance, Quezon City has a plastic bag reduction ordinance that has been implemented since way back 2012. Under the ordinance, retailers charge consumers P2 for every plastic bag that will be given at point of sale. The fee will be waived for customers who bring their own containers.

“It would be better if shops incentivize instead of penalize,” Hollis said.

Baguio City has attempted to ban plastic for around a decade. The ban is once again in effect, despite the lack of implementing rules and regulations.

Boracay, meanwhile, has encouraged the use of locally-produced canvas or flour bags in 2017. The implementation’s effectivity has yet to be assessed.

Most of the proposed measures focus on penalties.

Despite obstacles, Raymundo said there are companies that have started to recognize the cause.

“In my experience, McDonald’s allows you to use your own jar for sundaes. In Starbucks, it’s P5 off if you use your own tumbler,” Hollis said.

Meanwhile, Katindig said that some restaurants insist the use of disposable cups even though she brought her own containers “due to inventory purposes.”

Hollis said that she still gets chuckles from waiters for bringing her own containers. But she understands the need to educate and to not go on the offensive.