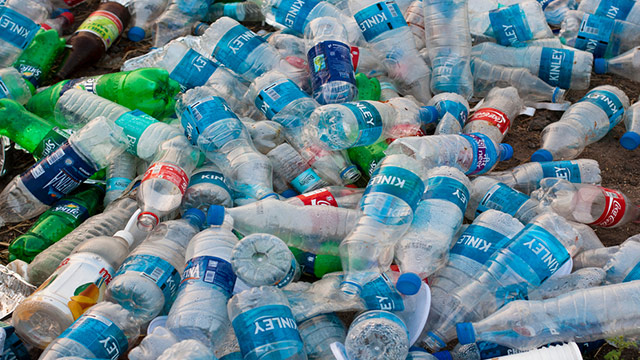 PALAWAN, Philippines – Digital nomad Bryan Madera was on an indefinite sabbatical, or “seabbatical” as he calls it, when he decided to do volunteer-for-accommodations last year at a hostel along the famed Twin Beach in Barangay Bucana, El Nido. While he was stunned by the splendid seascape, it wasn’t the first thing that caught his attention there.

“The hostel owner showed me around the community, and we arrived at the pile of plastic bottles tourism generated for one month,” he recounted in an email.

It didn’t take him long to conclude that excessive solid waste generation from both the local community and the tourists was a major problem.

As someone with coastal resources management training from graduate school and a strong grassroots movement background, he was convinced not to let the problem cause irreversible damage to the environment.

That was when his battle against single-use plastic bottles started to take shape.

“Back at the hostel, I started writing a concept note and doing research on how I can convince [businesses] to set up water refill stations,” he said.

Madera, however, had to leave El Nido and move to Northern Mindanao for a volunteering opportunity. Then in July 2017, he went to Siargao where he eventually piloted the Plastic Battle campaign in partnership with the Siargao Environmental Awareness Movement and Save Philippine Seas.

“Although Plastic Battle was piloted in Siargao Island, it was later on implemented in El Nido where the campaign was actually conceived,” he said.

Plastic Battle aims to reduce or eliminate single-use plastic bottles, sometimes referred to as polyethylene terephthalate (PET) bottles. The campaign convinces resorts, hostels, restaurants, and cafés to give people the option to refill reusable bottles for a fee or for free.

“It is a response to the study showing that the Philippines ranks 3rd in marine litter contribution globally, and to the prediction that there will be more plastic than fish in the seas by 2050,” Madera said.

“If we provide the knowledge, we also have to give practical solutions that can be integrated [into] our daily lives,” he added.

A global study shows that more than 100 million PET bottles are produced daily, but only one out of 5 gets recycled. (READ: Things you didn’t know about plastic water bottles)

“These plastic bottles will only start breaking into microplastics (extremely small pieces of plastic) in approximately 700 years,” Madera explained.

Many plastic bottles end up in the oceans, becoming “a threat to marine animals by entangling them or blocking their digestive tract, and to human health by the entry of microplastics into the food chain,” added Madera.

“One of the challenges I encountered was that a restaurant in El Nido does not serve service water and only sells bottled water to their customers,” Madera recalled.

“They declined to join and reasoned out, ‘We don’t have enough space to store water supply, and besides, we use our filtered water to clean our vegetables.’ They said their deep-well water, although filtered, may not be safe for drinking.” (READ: DENR wants El Nido’s groundwater tested)

Early on, he had anticipated that it would really be difficult to convince some establishments, but decided to continue his campaign anyway.

“We can’t please everyone, but at least we have other business partners in El Nido that provide service water,” he said.

In less than a year, Plastic Battle has reached over 60 member-establishments in tourism destinations, such as Puerto Princesa City, Coron, and El Nido in Palawan; Boracay; Bohol; Cebu; and Zambales, among others.

“We are happy whenever a business establishment commits to serve service water [and] to stop selling bottled water, and even tags us on their social media account signifying their commitment to use reusable water bottles,” Madera said.

“This would cut down the plastic bottle waste produced in a destination island that is far away from the recycling system. And if you are traveling on a budget, refilling your reusable water bottle would save you money,” Madera said.

“We need to promote the culture of water refilling and providing safe drinking service water to reduce our use of single-use plastic bottles that can end up in the ocean. If the community has this culture, then the tourists would also follow,” Madera said. – Rappler.com