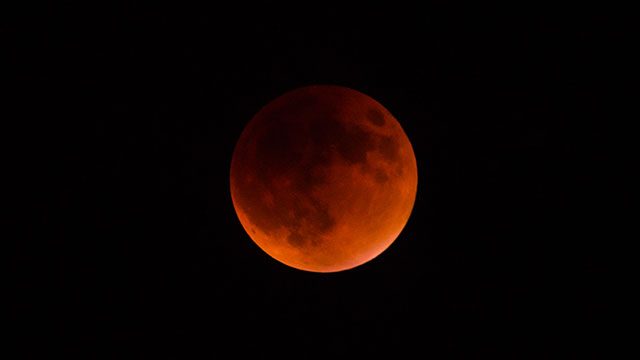 Facebook Twitter Copy URL
Copied
This is reportedly the longest total lunar eclipse of the century. The eclipse will start at 1:13 am Philippine Standard Time.

MANILA, Philippines – The Philippine Atmospheric, Geophysical and Astronomical Services Administration (PAGASA) recently announced that a total lunar eclipse will occur on July 28, and it will be visible in the Philippines.

Here’s the timing of the phases of the eclipse, according to PAGASA:

“Lunar eclipses are safe to watch and observers need not use any kind of protective filters for the eyes,” PAGASA said. “A pair of binoculars will help magnify the view and will make the red coloration of the moon brighter.”

The National Geographic reported that this total lunar eclipse is the longest of the century and will last one hour and 43 minutes.

“Some sunlight still reaches the moon, but first it goes through Earth’s atmosphere. The atmosphere filters out most of the sun’s blue light, so the moon looks red,” it added.

A partial solar eclipse will also occur on July 13, but it will not be visible in the Philippines. – Jee Y. Geronimo/Rappler.com