The Ocean Cleanup project sails out to sweep Pacific plastic 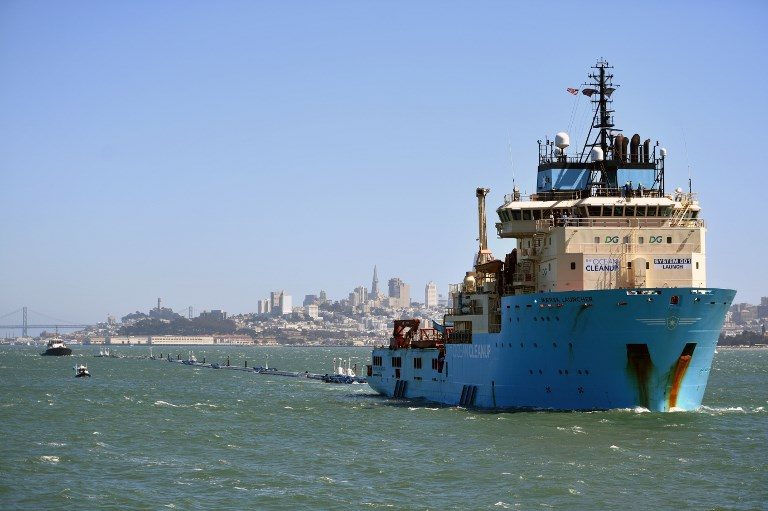 Facebook Twitter Copy URL
Copied
The ambitious project by The Ocean Cleanup, a Dutch non-profit group, hopes to clean up half of the infamous garbage patch within 5 years when all systems are deployed

SAN FRANCISCO, USA – A supply ship towing a long floating boom designed to corral ocean plastic has set sail from San Francisco for a test run ahead of a trip to the Great Pacific Garbage Patch.

The ambitious project by The Ocean Cleanup, a Dutch non-profit group, hopes to clean up half of the infamous garbage patch within five years when all systems are deployed.

After 5 years of preparation and scale model tests, “this is what it’s all about, this is the culmination of all the efforts,” said an excited Boyan Slat, the 24-year-old Dutch CEO and founder of The Ocean Cleanup.

Under a cloudless sky the Maersk Launcher ship sailed on Saturday past the Golden Gate Bridge out into the Pacific sea accompanied by a flotilla of sailboats and kayaks.

The supply vessel was towing a 600 meter-long boom device dubbed System 001, designed to contain floating ocean plastic so it can be scooped up and recycled. The system includes a tapered three-meter skirt to catch plastic floating just below the surface.

The ship was heading to a spot 240 nautical miles off the California coastline for a two-week trial before sailing to the Great Pacific Garbage Patch, a floating trash pile twice the size of France that swirls in the ocean halfway between California and Hawaii.

“The main mission is to show that it works, and hopefully then in a few months from now, the first plastics will arrive back into port, which means that it becomes proven technology,” Slat told the Agence France-Presse (AFP) as he witnessed the launch.

“That means that we can then start scaling up to a whole fleet of maybe 60 of these cleanup systems,” he said.

“Plastic has started to accumulate in the ocean since… the 1950s,” Lebreton told AFP.

He said that scientists first learned about the plastic concentrating in the Pacific garbage patch in the 1970s.