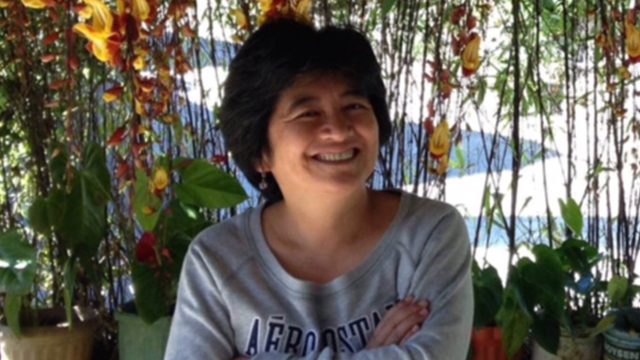 BAGUIO CITY, Philippines – A Cordilleran tagged by the government as a “terrorist” joined French President Emmanuel Macron and Indian Prime Minister Narendra Modi as this year’s recipients of the Champions of the Earth award, the United Nations’ (UN) highest environmental honor.

Joan Carling received her award at the Champions of the Earth Gala in New York City, on the sidelines of the 73rd UN General Assembly.

Carling, a Filipino-Japanese from Baguio and Sagada, is recognized for her work as one of the world’s most prominent defenders of environmental and indigenous rights.

Carling has been at the forefront of the conflict for land and the environment for more than 20 years, having been a chairperson of the Cordillera People’s Alliance and twice Secretary-General of the Asia Indigenous Peoples Pact.

“Her tireless and selfless fight for the environment has made her a champion to peoples and communities all over the globe,” the UN said.

Carling, who also served as a member of the UN Permanent Forum on Indigenous Issues between 2014 and 2016, cannot share her honor back home. (READ: UN Environment hits ‘terrorist’ tag on Filipino IP advocates)

She was among the more than 600 Filipinos in the proscription petition filed by the Department of Justice last February that listed the country’s communist terrorists.

She was also in the May 28 memorandum from the PNP Intelligence Group that ordered the listing of alleged NPA leaders.

“I have dedicated my life to teaching about human rights. I have spent much of it campaigning for environmental protection and sustainable development. So, I was surprised to learn that I was labelled as a terrorist,” Carling said.

She added: “In February this year, I was placed on a list of alleged armed rebels in the Philippines. I haven’t been home since. It has uprooted me: I fear for the safety of my family and friends. But I need to stay more motivated than ever. I cannot give up the fight for my people.”

Aside from Carling and the two prominent heads of state, the other Champions of the Earth this year are Beyond Meat and Impossible Foods, China’s Zhejiang’s Green Rural Revival Programme, and Cochin International Airport.

Macron and Modi are recognized in the Policy Leadership category for their pioneering work in championing the International Solar Alliance and promoting new areas of levels of cooperation on environmental action, including Macron’s work on the Global Pact for the Environment, and Modi’s unprecedented pledge to eliminate all single-use plastic in India by 2022. – Rappler.com