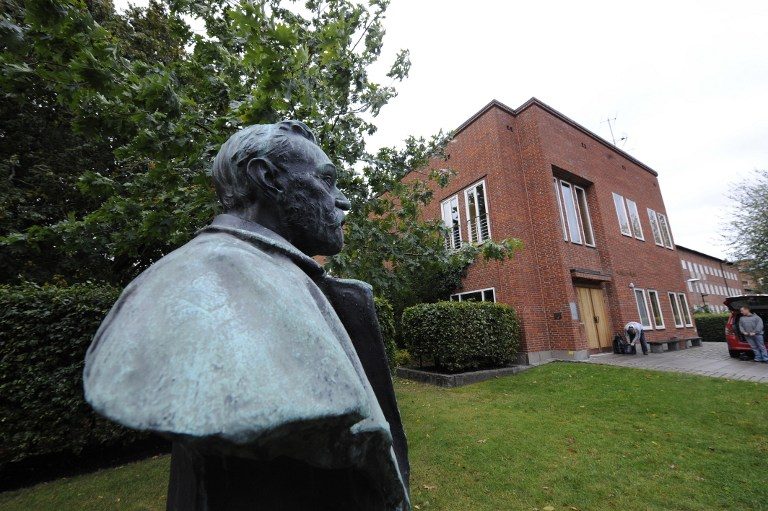 Facebook Twitter Copy URL
Copied
Without the Literature Prize, this year's other high-profile Nobel is the Peace Prize, to be announced in Oslo on Friday, October 5

STOCKHOLM, Sweden – An amputated 2018 Nobel season opens next week in Stockholm, without a Literature Prize for the first time in 70 years due to a #MeToo scandal.

The Medicine Prize laureates will be revealed by the Nobel Assembly at the Karolinska Institute on Monday, October 1, but many eyes will at the same time be turned to a Stockholm courthouse for the verdict against a Frenchman charged with rape who has close ties to the Swedish Academy.

The Academy, which has awarded the prestigious literary distinction since the Nobels were first awarded in 1901, has been torn apart by an acrimonious dispute over how to manage its affiliation with Jean-Claude Arnault.

In ruins, the Academy has decided to put off this year’s Literature Prize until 2019 when it will award two prizes – the first postponement since William Faulkner’s 1949 honor was awarded in 1950.

At the center of the scandal is 72-year-old Arnault, married to Academy member Katarina Frostenson and an influential figure on Stockholm’s culture scene for decades. His cultural club Forum received Academy funding for years.

Six of the Academy’s 18 members, who are appointed for life, no longer actively participate in the institution’s work due to the discord, adding to two others who had already stepped aside for other reasons.

Without a quorum of 12 and unable to elect new members – and criticized for its conflicts of interest, culture of silence and internal rivalries – the Academy has vowed to undertake massive reforms.

Traditionally known for its integrity and discretion, the Academy’s row has turned into a titillating public spectacle as members regularly exchange vicious blows via the media.

The Nobel Foundation, which manages the finances and the administration of the Nobel Prizes, hopes the Academy will pull itself together in time to award the prize again in 2019.

“I think there is a chance … but it is too early to judge,” foundation director Lars Heikensten said.

Others are not convinced, amid the widely-reported ongoing struggles in the Academy’s reform work.

“As things are now I wouldn’t say I am certain,” editor Hakan Bravinger of publisher Norstedts said.

Without the Literature Prize, this year’s other high-profile Nobel is the Peace Prize, to be announced in Oslo on Friday, October 5.

As always, the names of numerous potential winners are being tossed about in the run-up to next week’s announcement, some less credible than others.

It’s a guessing game rendered more difficult by the fact that the identities of the candidates – there are 329 this year – are generally kept secret.

US President Donald Trump has been mentioned as a possibility for his efforts to bring peace to the Korean peninsula.

But Dan Smith, head of the Stockholm International Peace Research Institute (SIPRI), said he believed it would be “inappropriate” to honor Trump after he withdrew the US from international agreements on the climate and Iran’s nuclear program.

In addition, the only known Trump nomination submitted to the Nobel committee turned out to be a fake.

What about South Korean President Moon Jae-in for his rapprochement efforts with North Korea?

Between the Medicine Prize announcement on Monday and the Peace Prize next Friday will come the awards for physics on Tuesday, October 2, and chemistry on Wednesday, October 3.

The Economics Prize will wrap things up on Monday, October 8.

This year, each Nobel comes with a 9 million kronor ($1.01-million, 870,000-euro) prize sum, to be shared if several laureates are honored in the same discipline.

The laureates receive their prizes at formal banquets held in Stockholm and Oslo on December 10. – Rappler.com