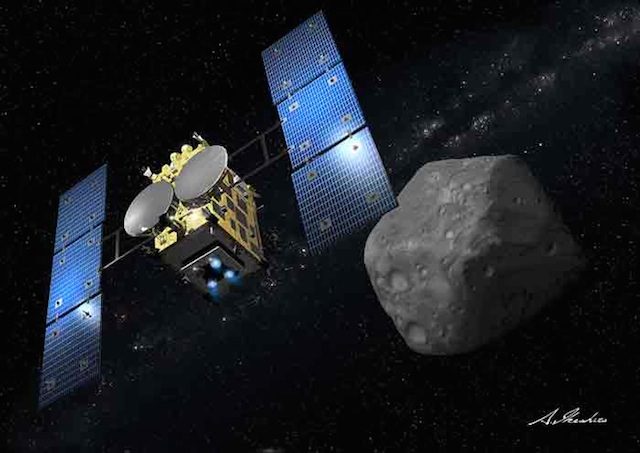 TOKYO, Japan – A Japanese probe sent to examine an asteroid in order to shed light on the origins of the solar system will now land on the rock several months later than planned, officials said Thursday.

The Japan Aerospace Exploration Agency (JAXA) told reporters the Hayabusa2 probe is now expected to touch down on the Ryugu asteroid in “late January” at the earliest, rather than at the end of this month as initially expected.

“The mission… is to land without hitting rocks,” Tsuda said, adding this was a “most difficult” operation.

“We had expected the surface would be smooth… but it seems there’s no flat area.”

Scientists are already receiving data from other machines deployed on the surface of the asteroid.

Loaded with sensors, the robot can take images at multiple wavelengths, investigate minerals with a microscope, gauge surface temperatures and measure magnetic fields.

Ten days earlier, a pair of MINERVA-II micro-rovers were dropped onto the asteroid – marking the first time that moving, robotic observation devices have been successfully deployed.

These rovers are taking advantage of Ryugu’s low gravity to jump around on the surface – travelling as far as 15 meters and staying above the surface for as long as 15 minutes – to survey the asteroid’s physical features with cameras and sensors.

Hayabusa2, about the size of a large fridge and equipped with solar panels, is the successor to JAXA’s first asteroid explorer, Hayabusa, which is Japanese for falcon.

That probe returned from a smaller, potato-shaped, asteroid with dust samples in 2010, despite various setbacks, during an epic seven-year odyssey hailed as a scientific triumph.

The Hayabusa2 mission, which costs around 30 billion yen ($260 million), was launched in December 2014 and will return to Earth with its samples in 2020.

Photos of Ryugu – which means “Dragon Palace” in Japanese, a castle at the bottom of the ocean in an ancient Japanese tale – show an asteroid shaped a bit like a spinning top with a rough surface.

By collecting samples from the surface, scientists hope to answer some fundamental questions about life and the universe, including whether elements from space helped give rise to life on Earth. – Rappler.com