Why women, including feminists, are still attracted to ‘benevolently sexist’ men 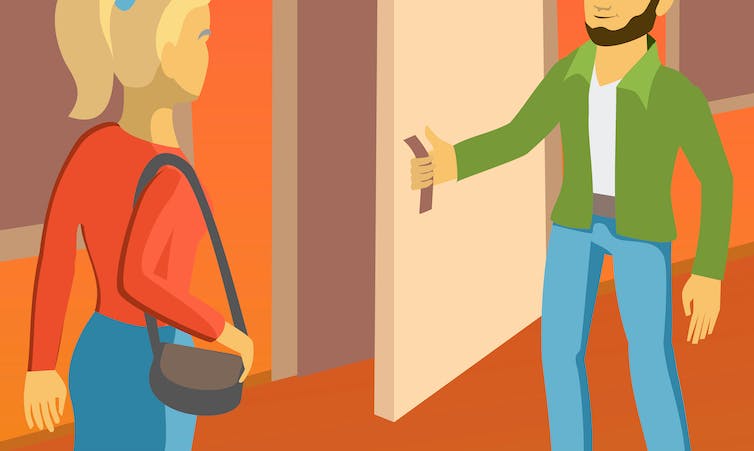 If a man offers to help a woman with her heavy suitcase or to parallel park her car, what should she make of the offer?

Is it an innocuous act of courtesy? Or is it a sexist insult to her strength and competence?

But researchers have also revealed a paradox: Women prefer men who behave in ways that could be described as benevolently sexist over those who don’t.

How could this be?

Some say that women simply fail to see the ways benevolent sexism undermines them because they’re misled by the flattering tone of this brand of kindness. Psychologists have even suggested that benevolent sexism is more harmful than overtly hostile sexism because it is insidious, acting like “a wolf in sheep’s clothing.”

As social psychologists, we had reservations about these conclusions. Aren’t women sophisticated enough to be able to tell when a man is being patronizing?

Surprisingly no previous research had tested whether women do, in fact, fail to recognize that benevolent sexism can be patronizing and undermining. And given our backgrounds in evolutionary theory, we also wondered if these behaviors were nonetheless attractive because they signaled a potential mate’s willingness to invest resources in a woman and her offspring.

So we conducted a series of studies to further explore women’s attraction to benevolently sexist men.

What does benevolent sexism really signal?

The concept of benevolent sexism was first developed in 1996. The idea’s creators argued that sexism is not always openly hostile. To them, attitudes like “women should be cherished and protected by men” or behaviors like opening car doors for women cast them as less competent and always in need of help. In this way, they argued, benevolent sexism subtly undermines gender equality.

Since then, social psychologists have been busy documenting the pernicious effects that benevolent sexism has on women.

According to studies, women who acquiesce to this behavior tend to become increasingly dependent on men for help. They’re more willing to allow men to tell them what they can and can’t do, are more ambivalent about thinking for themselves, are less ambitious and don’t perform as well at work and on cognitive tests.

Given these documented downsides, why are women still attracted to this behavior?

The answer could lie in what evolutionary biologists call “parental investment theory.”

Whereas men can successfully reproduce by providing a few sex cells, a woman’s reproductive success must be tied to her ability to complete months of gestation and lactation.

During much of human history, a woman’s ability to choose a mate who was able and willing to assist in this process – by providing food or protection from aggressors – would have increased her reproductive success.

Evolution, therefore, shaped female psychology to attend to – and prefer – mates whose characteristics and behaviors reveal the willingness to invest. A prospective mate’s muscular physique (and, today, his big wallet) certainly indicate that he possesses this ability. But opening a car door or offering his coat are signs that he may have the desired disposition.

In our recently published research, we asked over 700 women, ages ranging from 18 to 73, in five experiments, to read profiles of men who either expressed attitudes or engaged in behaviors that could be described as benevolently sexist, like giving a coat or offering to help with carrying heavy boxes.

We then had the participants rate the man’s attractiveness; willingness to protect, provide and commit; and his likelihood of being patronizing.

Our findings confirmed that women do perceive benevolently sexist men to be more patronizing and more likely to undermine their partners.

But we also found that the women in our studies perceived these men as more attractive, despite the potential pitfalls.

So what made them more attractive to our participants? In their responses, the women in our study rated them as more likely to protect, provide and commit.

We then wondered whether these findings could only really be applied to women who are simply OK with old-fashioned gender roles.

To exclude this possibility, we studied participants’ degree of feminism with a widely used survey that measures feminist attitudes. We had them indicate their level of agreement with statements such as “a woman should not let bearing and rearing children stand in the way of a career if she wants it.”

We found that strong feminists rated men as more patronizing and undermining than traditional women did. But like the other women, they still found these men more attractive; the drawbacks were outweighed by the men’s willingness to invest. It seems that even staunch feminists may prefer a chivalrous mate who picks up the check on a first date or walks closer to the curb on a sidewalk.

In this time of fraught gender relations, our findings may provide reassurance for women who are confused about how to feel towards a man who acts chivalrous, and well-meaning men who wonder whether they should change their behavior towards women.

But several interesting questions remain. Does benevolent sexism always undermine women? It might depend on context. A male being overly helpful to a female co-worker in a patronizing way might hurt her ability to project professional competence. On the other hand, it’s tough to see the harm in helping a woman move heavy furniture in the home.

Understanding these nuances may allow us to reduce the negative effects of benevolent sexism without requiring women to reject the actual good things that can arise from this behavior.