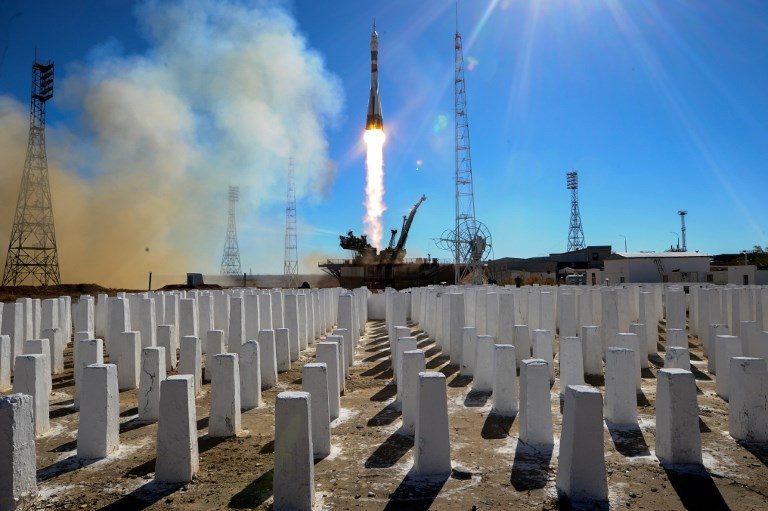 MOSCOW, Russia – Russian cosmonaut Aleksey Ovchinin and US astronaut Nick Hague are likely to go into space in the spring after their flight was suddenly aborted, the head of the Russian space agency said Friday, October 12.

“The guys will fly for sure,” Roscosmos chief Dmitry Rogozin said on Twitter, posting a picture of himself with smiling Ovchinin and Hague.

“We are planning their flight for the spring of next year,” he said, adding the men had returned to the space training center Star City outside Moscow.

Ovchinin and Hague had a close brush with death when a Soyuz rocket failed shortly after launch from Baikonur cosmodrome in Kazakhstan on Thursday, October 11.

It was the first such accident in Russia’s post-Soviet history and a major setback for its once proud space industry.

The aborted launch took place in the presence of NASA Administrator Jim Bridenstine who was visiting Russia and Baikonur this week and was a huge embarrassment for Russia, which has recently touted plans to send cosmonauts to the Moon and Mars.

The Soviet-designed Soyuz rocket is currently the world’s only lifeline to the International Space Station and the accident is expected to affect the work of the orbiting laboratory.

All manned launches have been suspended and a criminal probe has been launched.

The astronauts escaped unharmed and were in good spirits on Thursday. Official photographs showed them embracing their wives and tucking into food.

Industry experts say the country’s space industry has in recent years suffered so many mishaps – including the loss of cargo spacecraft and numerous satellites – that a serious accident during a manned mission was simply a matter of time.

“The breakup of the Soyuz,” Kommersant broadsheet said in a frontpage headline, while Nezavisimaya Gazeta daily wrote: “The space industry crashed in a couple of minutes.”

“There will be significant damage to the image of the industry,” Vedomosti business daily said.

The fiercely pro-Kremlin Izvestia daily pointed out however the accident proved that the Soyuz had a reliable rescue system, designed in 1986.

There have been two similar aborted manned space launches in the history of the Soviet space program.

In 1983, cosmonauts Vladimir Titov and Gennady Strekalov miraculously survived a fire during launch in Kazakhstan.

In 1975, cosmonauts Oleg Makarov and Vasily Lazarev made a successful emergency landing in the Altai mountains after problems during booster separation. The harrowing accident went down in history as the world’s first manned space launch abort.

Both NASA and the European Space Agency (ESA) expressed confidence in the reliability of the Soviet-era workhorse Soyuz rockets.

In a letter to the Russian space agency released Thursday, ESA director general Johann-Dietrich Worner praised the “extreme reliability” of the Soyuz and its importance for all countries with space programmes.

The United States is developing commercial space launches but problems with the Soyuz present a headache for NASA, which has a policy of having a continuous presence in space.

An interruption would also be disastrous for the research aboard the ISS, as the orbiting station serves as a scientific laboratory. – Rappler.com