What does the state of your bookshelf say about you? 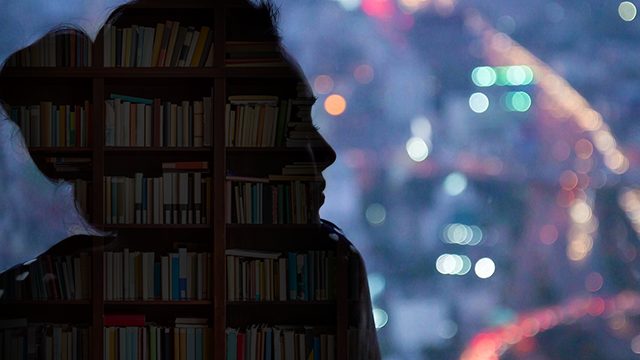 Facebook Twitter Copy URL
Copied
Books tear down the walls of what society assumed to be fixed, or at least, could largely be demolished only by political or economic policies. Books are revolutionary in themselves.

It is just a bunch of paper, with words on it, stuck together by two thicker pages on both ends but science says it is one of the most powerful forces on earth to shape a human life.

Books. Kafka says it is the “axe for the frozen sea within us.” When I read that for the first time when I was in my 20’s, I did not only agree with Kafka. I wanted to know who else thought that way and I wanted to read them. When I was maybe only about 6 or 7 and we would visit other people’s homes, I would always take a book that I see in those houses and read it instead of playing with other children. Then I would later interview the adult owners of the books in those houses on what they thought of those books. This embarrassed my parents, especially my mother. Now, I could tell her that had this happened now, I could tell her what science has found out about families with books at home.

Books were the “superheroes” that came out from the shelves in a  collaborative study done by researchers in the Australian National University and the University of Nevada. They found that being “bookish” actually makes for a way of life that increases one’s literacy, numeracy, and even technological skills in an enduring way – long into adulthood EVEN if this did not translate into many years of formal education later on.

The researchers wanted to find out if life skills such as problem-solving, the ability to sort facts and weigh their bearing on the task at hand and plan, and intellectual flexibility could come out of being surrounded by books as a child, as well as of your own ability to stay and cope with formal education. They examined 31 societies around the world for this and interviewed people aged 25 to 65 on the size of the libraries they had access to, growing up.

And indeed they found several things: One, home libraries of course varied across societies and that what “large” is depends on the context of society. But the important thing is that books were present in the homes in those societies in numbers that were enough to figure in the family as part of their day-to-day life. Michael Faraday (1791-1867), who discovered the law that enables us now to transmit electricity, could not afford schooling. I am presuming that he also did not have the money at home to be surrounded by so many books as books cost so much more in his time. He was an apprentice in a book binding shop. So he read all the books he could bind. That was how he was surrounded by books.

Second, adolescence  is a peak stage where books have the most powerful effect on adult literacy, numeracy, and digital problem-solving. I think this makes a lot of sense since neuroscience studies on teenage brains have shown that this is the stage in human life where we learn the fastest.

Third, adolescents with lower secondary education who were bookish become adults who are as literate, numerate, and technologically savvy at the same level as university graduates who grew up with only a few books. This is where those who do not have enough money for education but whose familes somehow found a way to surround tlem with books, clearly had an edge.

This proves that a child’s scholarly culture, which does not only mean educational attainment but an experience with books, really do have an effect on the kind of adult they will become, regardless of socio-economic status. Thus, books do not only axe the frozen sea within us, they also tear down the walls of what society assumed to be fixed, or at least, could largely be demolished only by political or economic policies. Books are revolutionary in themselves.

And the great thing about the study is that it gave an indication that even with the rise of e-books, the data showed that the ones who came out on top did still rely on a library of printed books. They cited studies that provide evidence of printed books still enabling more retention and comprehension over e-books among readers.   The researchers of course think that further studies should be done as e-books are on the rise. They think, however, that it is premature to dismiss  the power of the printed book. I predict that it will always have its place, even 50 to 100 years from now.

The next thing the researchers want to find out is how that happens. Their research did not yet delve into what kind of books inhabited their subject’s homes, if they finished reading all those books, how much time they spent reading or talking about those books. For now, given the clear effect, they are assuming that the prominent presence of books in a home or a community where a child grows up speaks so much about what your family and communities value: an exposition of ideas from many humans, most of whom they may never know. They will shape your mind in ways that will build you up as an adult.

This is why books should remain untaxed, should be affordable, should be donated to schools and communities. They build up the tower of a child from within.

Maria Isabel Garcia is a science writer. She has written two books, Science Solitaire and Twenty One Grams of Spirit and Seven Ounces of Desire. You can reach her at sciencesolitaire@gmail.com.