We discovered a warped and twisted disc of young, massive stars at the edge of our Milky Way

Feb 9, 2019 11:38 AM PHT
Facebook Twitter Copy URL
Copied
The Milky Way is all around us, so to determine its shape, we would need to map the distributions of stars in all directions 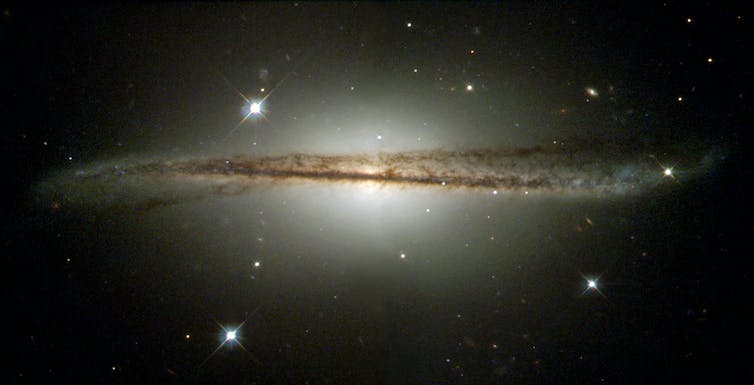 From a great distance, our Milky Way would look like a thin disc of stars that rotates once every few hundred million years around its central region. Hundreds of billions of stars provide the gravitational glue to hold it all together.

But the pull of gravity is much weaker in the galaxy’s far outer disc. Out there, the hydrogen clouds that make up most of the Milky Way’s gas disc are no longer confined to a thin plane. Instead, they give the disc an S-like, warped appearance.

Although the Milky Way’s warped hydrogen gas layer had been known for decades, in research published today in Nature Astronomy, we discovered that a disc of young, massive stars there is warped too, and in a progressively twisted spiral pattern.

We were able to determine this twisted appearance after having developed the first accurate 3-dimensional picture of the Milky Way’s stellar disc out to its far outer regions.

While that is not particularly difficult in directions above and below the stellar disc plane, it becomes much harder along the Milky Way’s plane.

Other than stars and hydrogen gas clouds in the Milky Way’s plane, our view is obscured by huge quantities of dust. The material astronomers call dust is made up of carbon particles. It is not too different from the soot that builds up in your home if, for example, you have an open fire.

Large quantities of dust obscure our view of what lies beyond, but dust also makes light look redder. This is because the size of those carbon particles is close to the wavelength of blue light. Therefore, blue light can be absorbed quite easily by the dust while red light passes through without too much trouble.

But it’s not just the presence of dust that makes mapping our Milky Way galaxy troublesome. It is notoriously difficult to determine distances from the Sun to parts of the Milky Way’s outer disc without having a clear idea of what that disc actually looks like.

One of the researchers in my international team – Xiaodian Chen of the National Astronomical Observatories (Chinese Academy of Sciences) in Beijing – compiled a new catalogue of well-behaved variable stars known as classical Cepheids. These stars vary in brightness over a period of time.

These stars are among the best mileposts in astronomy: they can be used to determine very accurate distances with uncertainties of only 3% to 5%. This is pretty much as good as it gets in astronomy, allowing us to obtain the most accurate map of the outer Milky Way available to date.

Our new catalogue was based on observations made with NASA’s Wide-field Infrared Survey Explorer (WISE), a space telescope fitted with long-wavelength (infrared) glasses, ideal to look through any dust in the Milky Way’s disc.

The Cepheids mapped range from the Milky Way’s centre to its outer regions with most on the near side of the centre of our galaxy because of observational limitations.

Classical Cepheids are young stars that are some 4 to 20 times as massive as our Sun, and up to 100,000 times as bright. Such high stellar masses imply that these stars live fast and die young, burning through the hydrogen fuel in their stellar interiors very quickly, sometimes in only a few million years.

Cepheids show day- to month-long pulsations, which can be observed quite easily as changes in their brightness. Combined with a Cepheid’s observed average brightness, the period of its pulsation cycle can be used to obtain an accurate distance.

We all warp together

Somewhat to our surprise, we found that our collection of 1,339 Cepheid stars and the Milky Way’s gas disc follow each other closely. Until our recent study, it had not been possible to tie the distribution of young stars in the Milky Way’s outer disc so well to the flaring and warped disc made up of hydrogen gas clouds. 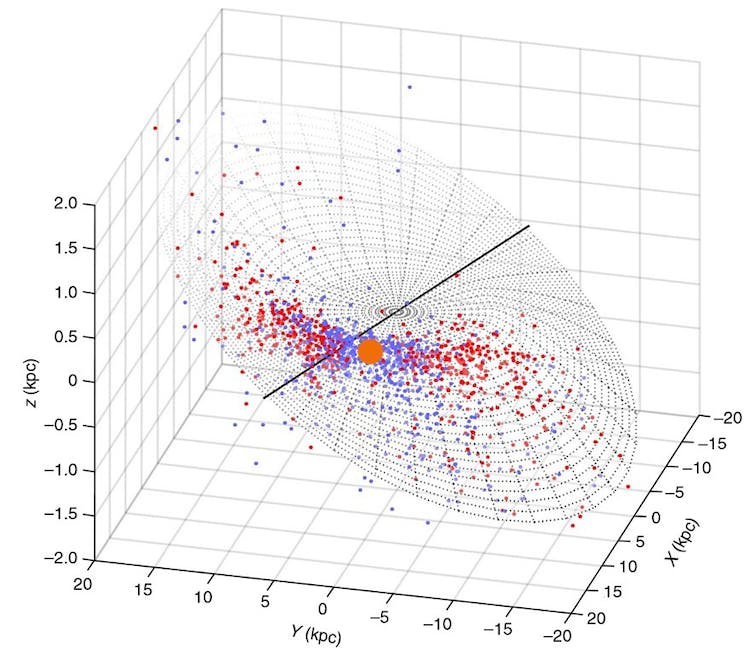 But perhaps more importantly, we discovered that the stellar disc is warped in a progressively twisted spiral pattern.

Many spiral galaxies are warped to varying extents, such as the galaxy ESO 510-G13 (pictured top) in the southern constellation Hydra, roughly 150 million light-years from Earth. However, only a dozen other galaxies were known to also show similarly twisted patterns in their outer discs.

Read more: Curious Kids: Where are all the other galaxies hidden?

Combining our results with these earlier observations, we concluded that the Milky Way’s warped and twisted spiral pattern is likely caused by forced torques from the galaxy’s massive inner disc. The rotating inner disc is, in essence, dragging the outer disc along, but since the outer disc’s rotation is lagging the resulting structure is a spiral pattern.

This new map provides a crucial update for studies of our galaxy’s stellar motions and the origins of the Milky Way’s disc. This is particularly interesting given the wealth of information we anticipate to receive from the European Space Agency’s Gaia satellite mission.

Gaia aims to eventually map our Milky Way in unprecedented detail, based on the most accurate distance determinations to the galaxy’s brightest stars ever obtained.