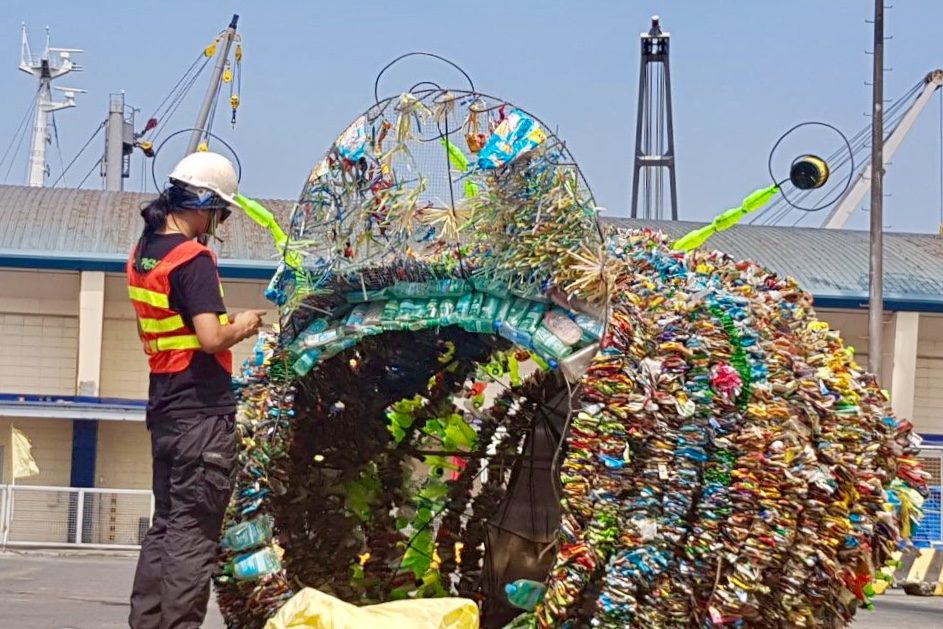 Facebook Twitter Copy URL
Copied
'In the analysis of the problem, it's not pointed out: What is the role of the corporations? It's always the individuals, it's always the government, not the source,' says Greenpeace Southeast Asia-Philippines campaigner Abigail Aguilar

MANILA, Philippines – Greenpeace ship Rainbow Warrior will embark in a tour this year for its Ship the Plastic Back campaign, primarily targeted towards corporations that use single-use plastics as packaging for their products.

Greenpeace Southeast Asia-Philippines campaigner Abigail Aguilar on Friday, March 1, said the campaign is placing emphasis on the role of corporations in the global plastic pollution crisis, as this is often overlooked.

“But in the analysis of the problem, it’s not pointed out: What is the role of the corporations? It’s always the individuals, it’s always the government, not the source.”

Aguilar said that for this campaign, Greenpeace is simply calling for corporations to reduce their production of single-use plastics and invest in “alternative delivery systems for the products they produce.”

Greenpeace began coordinating with corporations involved in manufacturing fast-moving consumer goods (FMCG) back in September 2017, when they began their waste audit and brand audit.

The auditing resulted in a total of more than 55,000 pieces of sachets collected. Most of these came from big FMCG producers. (READ: Nestle tackles ‘ocean-polluter’ tag in Philippines)

“[Corporations] came up with the possibility of pilot testing a refilling station in zero-waste communities,” Aguilar said.

“But so far there was no progress.”

Greenpeace Southeast Asia Executive Director Nederev Saño said that because these corporations only make use of plastic packaging for all their products, this leaves the consumers no choice but to patronize it.

Saño said he wanted to debunk the idea that poor Filipino households are the biggest cause of plastic waste. He points to large corporations that make these people rely on sachets & single-use plastics, which make it costlier for these households in the long run. | @rapplerdotcom

“Many of us are led to believe that this is the most convenient kind of life we can live,” he added.

But this does not need to be the case, Aguilar said, as long as the government continues to regulate, and corporations switch to better and resuable packaging for their products.

“These need not be niche…because there are agruments saying that maybe the upper and middle class can afford the ‘reuse systems’ and class C and D can’t afford it, but this is something that needs to be mainstream. We need to pilot something,” she added.

During the Rainbow Warrior’s two-week stay in the Philippines, Greenpeace will also conduct an underwater documentation of the Manila Bay and the Verde Island Passage, the strait between Luzon and Mindoro.

Saño noted that this is an opportune time, as the government has recently launched its rehabilitation of the Manila Bay, a move which Aguilar said might have just simply scratched the surface. (READ: Manila Bay cleanup: High hopes, murky plans)

“Maybe the cleanups are done regularly, it looks picture perfect at some point, but what’s underneath? What we see is just the surface. Maybe underneath, there’s more. That’s what we want to see.”

Saño said it is crucial to immediately deal with single-use plastic which finds its way to bodies of water, as this affects livelihoods.

“It cannot be solved by one sector alone…. We need to hold hands and stand together with the government and push all of the reforms that we need to see,” he added.

He added, “Most importantly, the source of the problem is the corporate sector, who also has the resources to help us address the pollution.”

Next week, the Rainbow Warrior will make its way to Cebu, which the Greenpeace hopes will be declared a “plastic-free, zero-waste” island.

Aguilar said the second part of the campaign will be held in Europe, where “the headquarters of the biggest corporations are.” – Rappler.com